[quote author=”- Chief Martin Brody (Roy Schieder)”]You’re gonna need a bigger boat.[/quote]
There are a few films out there that literally define a genre.  I’m speaking, of course, of movies like Star Wars, Citizen Kane, The Wizard of Oz and The Godfather.  These are films that everyone knows.  You could see a single frame and probably tell what film you’re looking at.  Jaws, of course, is one of those films.  There’s an old saying that the best way to avoid a shark attack is to stay out of the water.  I’ll never die of a shark attack because I won’t go in.  You know why?  Because I’ve seen this movie.  I often say in my reviews that “it’s hard to believe it’s been xxx number of years since this film came out.”  Well it’s been nearly forty years since Jaws first graced the silver screen and my how time flies.  Based on the best-selling novel by Peter Benchley, Jaws was the movie that really got a then fledgling director by the name of Steven Spielberg noticed.  Spielberg, as we all know, has gone onto one of the most lauded careers in Hollywood and shows no signs of slowing down.  It paved the way for his later works that included Raiders of the Lost Ark, Schindler’s List and Saving Private Ryan.

I’m going to assume that 99% of everyone reading this review has seen the film or at least knows the general plot.  If not, well, I really don’t know what to say.  Then again I’ve never seen Lawrence of Arabia, so stranger things have happened.  We meet Chief Brody (Roy Schieder) as the summer is in full swing.  He’s the Chief of Police of Amity, a vacation town that earns its keep from the tourist dollars.  But a recent wave of shark attacks threaten that industry and this leaves Brody with a decision to make: shut down the beach and risk losing financial dollars, or cater to the mayor (Murray Hamilton).  There is a local fisherman, Quint (Robert Shaw) who knows the damage the shark can do and offers to catch it.  He, together with the Chief and Matt Hooper (Richard Dreyfuss), an academic from the Oceanographic Institute, head out in the ultimate battle of man versus nature.

Jaws is a classic, more so than so many other films out there.  It plays on the most basic of human emotions – fear.  Since the movie came out there have been several others that have tried to replicate its success.  Most have failed and if imitation is the most sincere form of flattery, then Spielberg should be tickled pink.  Granted this is just another feather in his cap, but I wonder what kind of career he’d have had if this movie were a failure?  Jaws is one of those films in which everything is just perfect.  I doubt even Spielberg himself would change a thing if he could.  About the only thing that marred this movie was the subsequent sequels (all of which Spielberg had nothing to do with), but Hollywood is a business and you can’t blame them for trying.  While the movie lost out to One Flew Over the Cuckoo’s Nest for Best Picture, it’s widely accepted as one of the better films.  I can say that after seeing this movie, you’ll think twice about taking a swim in the ocean.  I do.

This is the first time that this film has been available on Blu-ray and as part of Universal’s 100th Anniversary celebration, the filmmakers have a real treat in store for us.  Jaws has been given the royal treatment with a brand new transfer going back to the original camera negatives to get the best possible picture quality.  I’m often blown away by how much work is put into restoring classic films and Jaws certainly falls into that category.  There’s an 8 minute featurette that gives us just a hint of the effort involved in bringing this movie to Blu-ray and let me say that the result is nothing short of extraordinary.  The 2.35:1 AVC HD image is better than anything we’ve ever seen.  Spielberg even comments that this new Blu-ray looks better than the film itself did when it came out in 1975.  How’s that for technology?  There’s a layer of detail that we’ve never seen before.  The sky looks more defined, the faces more clear, the blood in the water more red.  Everything is just better, there’s no other way to describe it.  As an avid fan of the film, I’ve seen it in nearly every format from VHS to LaserDisc to DVD and with this new Blu-ray, I really find it hard to believe that it could ever look better.  No doubt that this movie is a jewel in Universal’s crown, so I wouldn’t expect this kind of effort for every title out there, but it’s so nice to see this look the way it does.  Simply amazing.

If there’s ever a movie in which sound plays a role, I’d say it has to be Jaws. John Williams created one of the most iconic scores in the history of cinema and along with the visual restoration was converting the soundtrack to DTS HD Master Audio.  Again, the result is nothing short of perfection.  Spielberg explains on the featurette how the individual elements were used to make the sound “move” from left to right and add in surrounds.  Of course the score is of the utmost importance and it’s never sounded better.  I remember in some earlier versions of the film, there was a bit of a loss when it came to the dialogue.  This isn’t the case here as it sounds sharp and crisp.  This is another testament to the restoration of this film and I’ve simply never heard it sound more amazing than it does here.

The pickings were a bit slim when it came to Jaws on DVD.  But that’s a thing of the past and Universal has wisely pulled out all the stops for this release.  Most of the supplements we’ve seen before, but there are a few additions that should get you a bit more bang for your buck.  We start out with the documentary “The Making of Jaws”, this is the same one produced for the special edition LaserDisc years ago and it’s also appeared on the DVD.  “From the Set” is a UK featurette hosted by Iain Johnstone that shows us a bit of behind the scenes footage and a brief interview with a much younger Steven Spielberg.  “Jaws Archives” are some storyboards, production photos and promo material.  We get some deleted scenes as well as some outtakes and the original theatrical trailer.  Now the new stuff!  We do get a new 100 minute documentary “The Shark is Still Working: The Impact & Legacy of Jaws.”  In this we get some interviews with the cast and crew as well as director Steven Spielberg.  Some other filmmakers such as Kevin Smith and M. Night Shyamalan chime in as well.  Broken up into ten chapters, we get a look at pretty much everything that went into the making of this monumental classic and it’s a must see for any fan of the film.  As mentioned above, there’s also an 8 minute feature on the restoration and what it took to bring this amazing-looking image to Blu-ray.  Also included is an Ultraviolet copy, a DVD of the film and some BD-Live functionality. 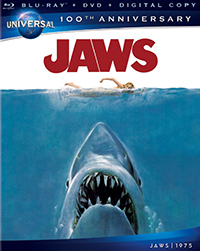