One of the distinct pleasures in my life is getting to watch the line-up of cult films that Arrow Video brings to light on Blu-ray. I enjoy most of the films that Arrow puts out, but whenever I see the release is a blaxploitation film, I immediately check it out. Blaxploitation was a film movement that had just as much garbage as artistic merit and entertainment value. When I saw J.D.’s Revenge arrive in my mailbox today, I popped it in immediately.

The storyline for the film begins with a flashback to New Orleans in 1942. Mobster J.D.(David McKnight) interrupts the murder (via a razor blade) of his little sister Betty Jo. While coming to her aid, his hands are covered in blood. This allows the actual killer to frame him and murder him. The story cuts to present day (1976) where law student and athlete Isaac (Glynn Turnam) studies with his girlfriend Christella (Joan Pringle.) She convinces him to go out to a topless club with some friends. They make their way down Bourbon street to a show held by Sara Devine, a hypnotist. Isaac is brought on stage and hypnotized. During and after the hypnosis, Isaac begins to see visions of J.D’s memory of his wife’s murder. He starts to act differently and wears a fedora and sees J.D.’s face in the mirror. He visits a doctor that says there is nothing wrong with him. He recommends that Isaac should chill out and smoke some weed. Isaac begins to become possessed by the mobster’s spirit and acting in ways that the good-tempered Isaac never would have, including seeking revenge on those who killed J.D and mistreating Isaac’s girlfriend. Champion of God, Reverend Elija Bliss (Lou Gossett, Jr.) was present during J.D.’s death years earlier. Isaac begins to visit his sermons, and so does J.D.

J.D.’s Revenge is a fun and crazy exploitation film. It has all the familiar trappings of other blaxploitation films (nudity, misogyny, violence towards women,) but it also has a fun and ridiculous plot that holds the viewer’s attention to the end. The main reason to watch this film is the performance by Glynn Turnam. He is a lot of fun to watch on the screen as the Jekyll and Hyde duo of Isaac and J.D. Glynn chews the scenery like crazy but it does not take away from the performance. It actually enhances the performance. When he comes out of the shower with the haircut that J.D. had, it made me laugh out loud. There are also some really fun lines uttered by all the characters in the film, but the best lines are saved for the psychotic J.D. The film is directed by Arthur Marks and features a solid performance by the reliably great Lou Gossett, Jr.

This new transfer in 2K from the original prints by Arrow Video uses an MPEG-4 AVC encoding of the film in 1.85:1. This is not a film that can ever be turned into a beautiful masterpiece. Given the budget constraints of the film and the shape the film has been left in, you should go into this transfer knowing that it is essentially reference quality, but that this film is not going to win any awards for defined focus. The image can be a little muddy sometimes and soft-focus picture is fairly common. Honestly, if this movie was on Ultra HD it would look the exact same as it does now. This is a case where the film elements are the culprit and Arrow only has so much to work with. Fans will be pleased.

Arrow Video have provided a good LPCM Mono track. This track for the most part has good clarity, but there are certain times where the audio gets a little bit muddy. My guess would be that Arrow have done every single thing that they could to make this track sound the best that it can. The fact of the matter is that the original audio recording on this film for AIP on a small budget was not given the greatest care. The funk and disco sounds of the soundtrack have been given a little bit more space in the sound field, but for the most part this soundtrack is very flat overall. Kudos to Arrow for doing the best that they could to present the film as clearly as possible.

J.D.’s Revenge is another welcome entry into the pantheon of Arrow Video’s line of cult films. It is a ridiculous film that manages to keep the viewer’s attention until the end. This is a real accomplishment when dealing with exploitation movies that typically suffer from terrible pacing. This film is lean and mean and puts a fun take on essentially a Jekyll and Hyde story. Be forewarned that this film has violence against women that absolutely would not fly now in a film. If you can get past that, this is a really fun blaxploitation film. Arrow have provided the best possible technical specs for the film and some well-thought out supplements. If you like this genre, don’t hesitate to check this one out. 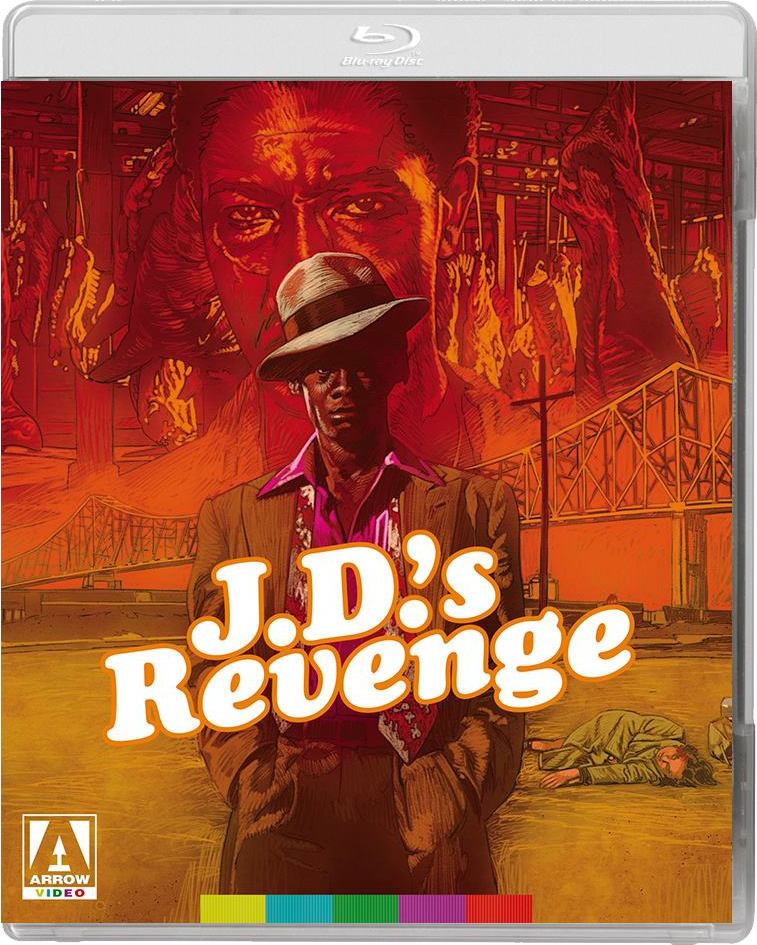