I’ll come right out and say it, Innerspace is one of my guilty pleasures! Why is it that so many movies made during the 80’s are most everyone’s guilty pleasures? Who knows, but let’s go ahead and blame it on Reagan. Ok, enough about that. You’ll have to look very closely, but Stephen Spielberg did not direct this movie, and he didn’t direct Poltergeist, Gremlins or The Goonies either (though his name is everywhere and the movies have his name figuratively all over them). This movie is notable in a few ways, first it’s where Meg Ryan and Dennis Quaid met (and went out or married for about ten years, you never can tell with Hollywood couples) and it was the end of Meg Ryan doing anything short of a romantic comedy. But for the record, Joe Dante (Gremlins, Small Soldiers) did direct them movie and it won an Academy Award for Best Visual Effects. And it’s got Martin Short in it, so it’s got to be funny? Yes and no…

Short plays Jack Putter, a nerdy hypochondriac who somehow gets in the middle of a government operation. Jack is injected with a syringe that contains one Lieutenant Tuck Pendleton (Dennis Quaid). I do have to note that Tuck is shrunken down into a microscopic size, hence he is able to be injected into Jack’s rear end. Add to this Lydia Maxwell (Meg Ryan) as Tuck’s girlfriend and you’ve got trouble. You see, as in most movies, there are “bad guys” trying to get their gritty little paws on the formula that allows people to be shrunken down into itty-bitty people. Tuck, inside of Jack’s body can talk to him through a microphone that is connected to his inner ear (his very inner ear)! As you can imagine, this provides a virtual proving ground for Martin Short’s physical comedy that he’s made a good career at. Quirks and turns abound and it’s the physical humor that makes the movie fun and interesting.

If all of this might sound a bit familiar, it’s because it borrows heavily from an older movie by the name of The Fantastic Voyage. Still, with all of the remakes that are going on in Hollywood, this was one of the ones to use it wisely. Dante had a major hit on his hands, as he did with Gremlins too. I somehow imagine Stephen Spielberg with some puppets on his string (imagine the cover of The Godfather) with Robert Zemeckis, Tobe Hooper and Joe Dante on the ends of those strings! I could be wrong, and probably am, but either way you cut it; Innerspace is a good movie from the 80’s. Suspend your disbelief for a few hours and you won’t come out being a better person, but at least you’ll be entertained.

A new digital transfer was created for the 2002 DVD and while a new 4K master wasn’t struck for this Blu-ray, I’d say that it still looks somewhat impressive. The 1.85:1 AVC HD encode is certainly the paramount of visual quality for this film.  Admittedly, it does have a bit of a dated look to it, physically speaking. Ryan’s “80’s hair” is in full force and a bit of blooming in some of the exterior shots are noticeable and distracted me for a couple scenes, but for the most part it looks very good. Black levels are on target, except in one of the opening scenes, I saw a bit of artifacting. Aside from those few errors, Innerspace looks great.

The included DTS HD Master Audio mix seems to be the same Dolby Digital 5.1 mix used for the DVD. While not bad, it lacks the depth of most modern movies, Innerspace does sound fairly decent for a movie that’s now nearly 30 years old. The majority of the sound is limited to the front three channels, but this is a new mix we have here and some sounds do emanate out of the surround speakers too. These surround effects do sound a bit “fake” as if they almost are there just to say “Hey, it’s a re-mastered soundtrack”, listen to us! Dialogue is fine, with no distortion and I’d be hard pressed to find much else “bad” to say about this. Viewers will be more than satisfied.

No new supplements have been added to this Blu-ray release, we get the same as were found on the DVD from a while back.

Innerspace was and continues to be one of my guilty pleasures. Seeing Dennis Quaid, Meg Ryan (in her first real leading role) as well as the amazing Martin Short in their primes is a sight to behold. The Blu-ray is essentially an HD version of the Blu-ray. No new supplements have been added (in fact, the cast and crew bios have been removed), but the movie does look and sound a bit superior to its DVD counterpart – which is to be expected. 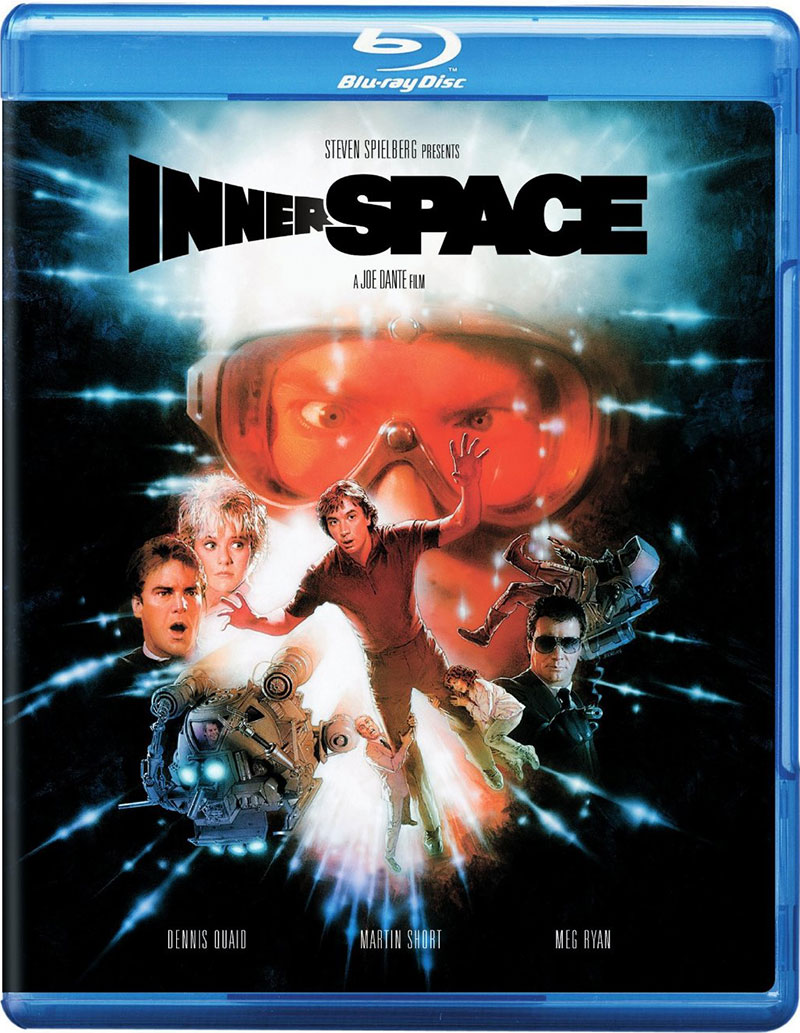