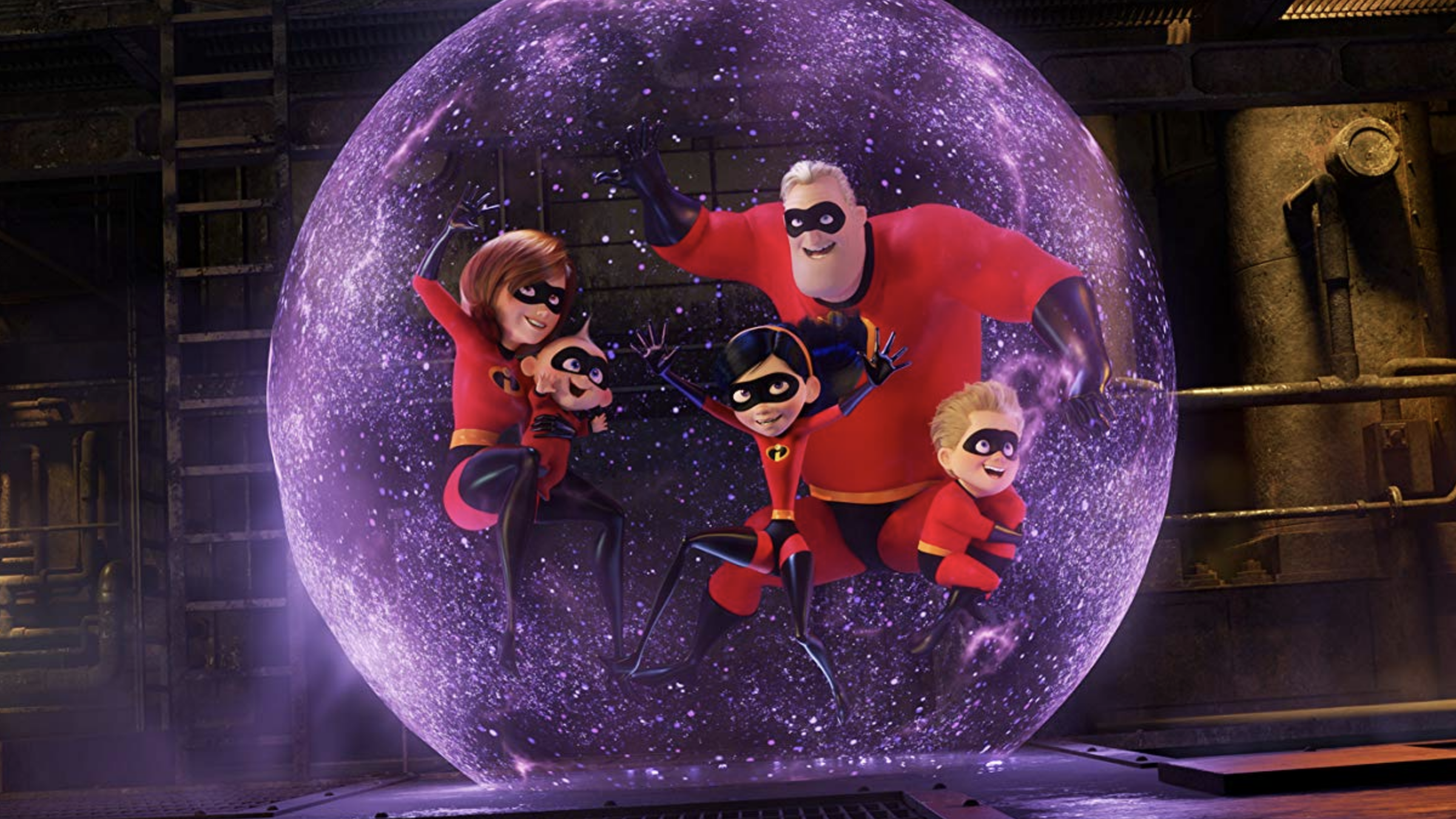 In 2004 there were only a handful of Pixar films. But there has been enough that everyone knew the studio would stick around and continue to churn out hit after hit. I’d seen them all, but when I saw The Incredibles, I knew that I had a new favorite. Bear in mind this was before every other movie was about superheroes. A “vintage” film about the real lives of superheroes once they retired and tried their best to have normal lives. It’s not exactly what audiences were used to. The film packed enough action, emotion and comedy to make an entertaining film for kids and adults alike. Flash forward fourteen years and the long wait is finally over. We’ve had to suffer through three Cars films and maybe that made the wait more worthwhile? Nevertheless, most everyone from the original is back and all I can say is “it’s about time!”

The film starts off right where the last one left off. This is good, but it also sets the stage that superheroes are now legally prohibited from fighting crime due to their destruction they cause. If this sounds remotely familiar, it’s because the same issue was tackled in Captain America: Civil War. But I digress. We meet a businessman named Winston Deaver (voiced by Bob Odenkirk), who wants to bring back the superheroes with the help of his sister, Evelyn (voiced by Catherine Keener). They launch a PR campaign showing the split-second decisions that need to be made and, more specifically Elastigirl (voiced by Holly Hunter). Leaving husband, Mr. Incredible (voiced by Craig T. Nelson) at home to mind the children, we meet the Screenslaver, who has figured out a way to hypnotize anyone looking at a screen. Where are all the superheroes when they’re finally needed?

There are few sequels that manage to capture the magic of their predecessors. Incredibles 2 is one of those. It manages to capture some topical and compelling themes, mainly the role reversal of a husband and wife with the children. Additionally, in a not-so-subtle way, our society’s addition to screens and not just television. Those little smartphones that’s in everyone’s pocket are, for sure, the real object. But everything is so intertwined and works so well, it’s hard to miss some of this. Add to that, all the talent that made the first one so enjoyable to watch is back including an expanded role for Frozone (voiced by Samuel L. Jackson). Part of what’s made Pixar films so enjoyable is that they play equally well to children and the adults that take them to the movies. Incredibles 2 is no exception.

When it comes to Pixar films and how they translate to DVD, Blu-ray or 4K the question isn’t if they’ll look good, but how good. I don’t think I can recall one of these computer-animated films that’s been anything less than stellar and as we might guess, Incredibles 2 dazzles. The 2.39:1 AVC HD transfer uses every inch of your screen, filling it with so much detail it’s hard to take it all in. Colors pop with a vibrance that’s hard to describe. Blacks are solid, flesh tones are, well, as “fleshy” as they can be considering the characters aren’t real. The laser beams from Jack-Jack’s eyes, the static from the “retro” televisions and I could go on. Suffice it to say that when watching this (or any) Pixar film, odds are you won’t be left wanting more visually.

There’s been a lot of hoopla surrounding some of the Disney films and their respective audio mixes. Incredibles 2 gets a DTS HD Master Audio that’s just a bit short of its more expensive big brother – the 4K version which gets a Dolby Atmos mix. Still, don’t let that deter you in the least. What we’ve got here is everything that’s needed for a nice, robust mix. Vocals are clear and crisp, surrounds are constantly active and the LFE’s get a chance to play. There are some prime examples of superior surround sound here, namely in the first and third acts. I don’t imagine anyone will be too disappointed with how this sounds. If you are, you can always upgrade – though I don’t see the need.

This three disc set has features on the two Blu-ray’s and a DVD is also included as a third disc.

Pixar’s films are in the 20’s (as of this writing) and there are two that are among my favorites: The Incredibles and Incredibles 2. I oddly like Brave, though, that one always seems to get overlooked. Nevertheless, Brad Bird and his team are back, albeit nearly a decade and half later, and give us everything that worked in the first one. Top notch audio and video along with a wealth of supplements make this one a no-brainer. 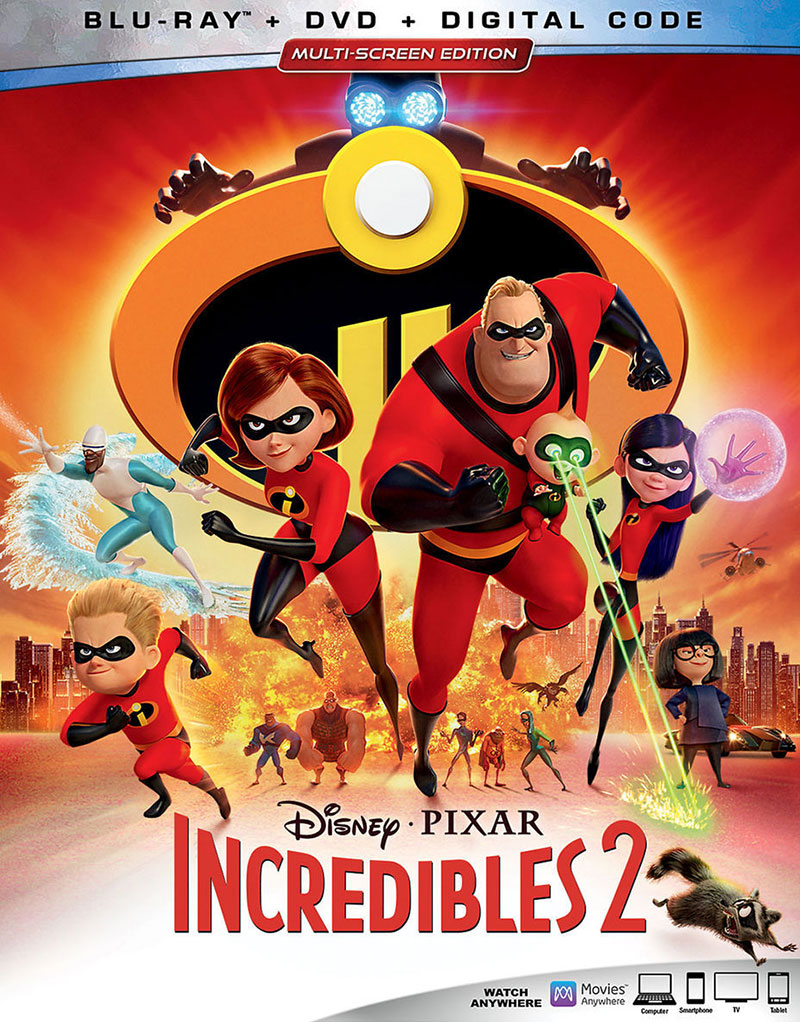