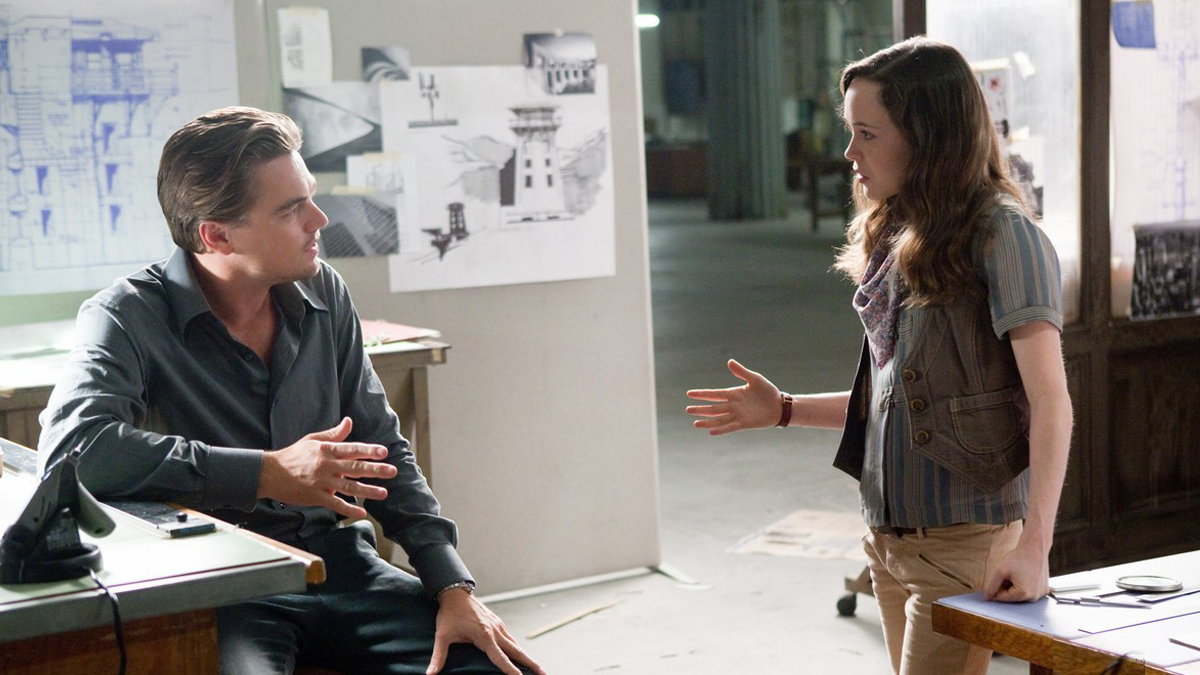 I’ve become such a rabid fan of Christopher Nolan over the years I think I’d watch pretty much anything that he directed. Yes, he could probably film water doing nothing more than water does and somehow it would seem more interesting than what a lot of directors come up with. About a decade ago, “Memento” came out with critical acclaim and I was an instant fan. His follow-up to that film, “Insomnia” was good, though nowhere nearly as well-received as the prior. But all of that is child’s play because in 2005 Nolan took over the rejuvenated “Batman” franchise and, well, the rest is history. To date, both of the “Batman” movies helmed by Nolan have not only been critical hits, but commercial as well with “The Dark Knight” being the second highest-grossing film of all-time (just behind “Avatar”). It goes without saying that Christopher Nolan knows what he’s doing and now with “Inception”, we see that he’s not a one hit wonder. Not that we thought he was to begin with.

Cobb (Leonardo DiCaprio) is a thief of sorts. But he steals secrets from your mind while you sleep. Cobb’s the best there is at what he does, but his success has come with a price. He’s been given one chance that might not only redeem his life, but only if it plays out. We meet Cobb and his team of “inceptors” if you will that include Arthur (Joseph Gordon-Levitt), Ariadne (Ellen Page) and Eames (Tom Hardy) to name just a few. Their mission is to infiltrate the subconscious of one Robert Fischer (Cillian Murphy) and implant an idea in Fischer’s head. The brains behind this particular plan is done by Saito (Ken Wantanabe), who is Fischer’s rival in the corporate world. By successfully doing this, Cobb gets his life back and presumably lives happily ever after. Sounds simple, right? Think again. To say that there’s more to “Inception” than meets the eye is one of the biggest understatements ever uttered.

“Inception” delivers on many levels and once you see it, you’ll no doubt chuckle at my deliberate pun. I’ve often said that my favorite movies are ones that really make you think. Yes, it’s fun to sit back and watch aliens or shoot-’em ups, but movies that really make you utilize your brain are among the most rewarding (to me, anyway). What “Inception” does is it creates, literally, a virtual world within a world and manages to explore the depths of the subconscious. Imagine, if you will, if we really could see in someone’s mind during their dream state. Fascinating. I’d be remiss if I didn’t mention the cast as Leonardo DiCaprio and Joseph Gordon-Levitt are among two of my current favorite actors. The script, also written by Christopher Nolan, is sharp as a tack and the film is executed with pristine excellence.  If you’re sick of all the crap that Hollywood puts out week after week and month after month, check out “Inception.” You won’t regret it.

Inception has been given a new 4K transfer and it’s nothing short of spectacular. The palette used is a bit muted, with the main characters wearing greys and blacks but this doesn’t deter from the overall clarity of the transfer. Detail is amazing, consider the architecture in some of the dream sequences, you can make out each window. Amazing. Contrast is right where is should be and flesh tones look fresh and natural (even for some of the more “pasty” actors like Ellen Page and Marion Cotillard). The HDR gives a new layer of depth and color, though the film wasn’t exactly lacking previously. If the Blu-ray looked good, this ups the ante that much more.

The DTS-HD Master Audio soundtrack is also right up there. I’m in adoration of Hans Zimmer’s score for the film, it manages to create a mood and inject suspense during the last 45 minutes of the film. It simply resonates throughout all the speakers immersing you into the film (as it should). Dialogue is crisp and sharp and the LFE make their presence known early and often. There’s plenty of action, gunshots, car chases and the like. It all sounds amazing. I don’t think this soundtrack is quite as impressive as the movie is visually, but it’s right up there. An amazing soundtrack and one that will give your system a workout, for sure.

Like the other Nolan films that have been released on Ultra HD, there are no new supplements. The two Blu-ray discs included contain all of the supplements, all of which are a direct port from the previous Blu-ray edition.

Inception has held up very well in the time since its release and my guess is that it will continue to do so. It’s more of an experience as opposed to a film. It’s just that good. The Ultra HD/4K version certainly improves upon the initial Blu-ray, though the lack of new supplements is a bit disappointing. Still, this should be on every film lover’s shelf.