In the Mouth of Madness: Collector’s Edition (Blu-ray)

“Do you read Sutter Cane?”

I love John Carpenter movies. I did not become a big fan of Carpenter until I was in college and watched Big Trouble in Little China countless times with friends. This means that I have been slowly catching up and watching his films over the years. Scream Factory has released a brand new Collector’s Edition of his 1994 film In The Mouth of Madness with a new 4K scan. Since I had not seen the film before, it seemed like a great time to check it out.

The film begins with John Trent (Sam Neill) as he is forcibly committed into an asylum. When one of the doctors on staff visits his room, John has covered himself and the room in scribblings of puzzle pieces, crosses, and other markings after receiving a single crayon. The doctor asks him to tell his story and he explains that he wasn’t always suffering from nightmares and visions. He was an insurance investigator. It flashes back to show John working on a case where a man was attempting insurance fraud. He proves that the man had burned his own property to make a claim. This impresses Robinson (Bernie Casey) who has his own insurance business. He offers John a job to track down a novelist named Sutter Cane. As he is discussing the job over a cup of coffee, a crazed man with an axe smashes out the window to the shop. He looks at John and asks, “Do you read Sutter Cane?” As he lifts the axe, he is blown away. At home, John watches the news where Sutter Cane fans are rioting over too few copies of his latest novel. Sutter Cane’s novels are having a bizarre effect on their readers. John begins to investigate Cane’s disappearance and after talking to his editor Linda Styles (Julie Carmen) he begins to read Cane’s novels. He soon finds the novels are causing him to lose his grip on reality. He discovers a link between the novels’ covers that forms a map. He thinks he has found where Cane will be hiding. Using the map he takes Linda with him to Hobb’s End, a town that exists in Cane’s novels but does not exist on any traditional map. Inside the town they will be faced with strange occurrences that may be directly tied to Cane’s fiction.

The script penned by Michael De Luca is one of the stronger entries in Carpenter’s oeuvre. De Luca had worked as the president of production at New Line Cinema when he produced his script. His script that pays homage to H.P. Lovecraft’s fiction has a few moments of cheesy dialogue but overwhelmingly has inspired moments of strange occurrences. This film is all about setting and the fictional town of Hobb’s End, Massachusetts is a fantastic setting. De Luca fills the town with interesting inhabitants, strange locations, and bizarre events. I can see how Carpenter was drawn to the project and I am glad that he helmed the picture. While this film is different from some of Carpenter’s films that he wrote himself, it has many of the enjoyable attributes of Carpenter’s best films that he didn’t write. There is a sly sense of humor to the film at times and it never fails to be interesting for the entire run-time.

The acting in the film is generally pretty strong. Sam Neill is enjoyable as the leading man of the film, even if he is not entirely convincing in some of the more ham-fisted scenes. Julie Carmen does good work as Linda. Jürgen Prochnow is a great casting choice for Sutter Cane and does great in the film, despite only being on-screen a limited amount of time. The cinematography by Gary B. Kibbe, a frequent collaborator to Carpenter, serves the film well. Certain scenes in the film are really visually exciting. The production design by Jeff Ginn helps to bring the world of the film to life. The film relies on some excellent practical effects and creature effects from Greg Nicotero and more. I am so thankful that Carpenter didn’t use the CGI that would swarm the industry in the years following this film to create the effects in this film. It looks so much better because of the practical effects.

In the Mouth of Madness is one of John Carpenter’s most enjoyable films. While it never reaches the heights of The Thing or Escape from New York, this is a great later entry in the master director’s canon and a film I am likely to revisit often.

Scream! Factory have always shown great reverence to John Carpenter’s films, knowing that these films are some of the best in their lineup and some of the most beloved by fans of the label. This new 4K scan of the film is absolutely fantastic. This is one of the times where I am left with noting at all to complain about. This transfer is reminiscent of some of the best work by Criterion. The source material was clean and the details are sharp. It looks gorgeous on Blu-ray and is well worth picking up based on the visuals alone. Perfect.

The disc has been provided with an ample track that will certainly give your surround system a good workout. This track has excellent clarity, but you better be prepared for a loud track. Vocals are crisp and clean, surrounds dominate and the front stage handles most of the action. But again – it’s loud! The score by John Carpenter and Jim Lang fits the film really well. Fans are going to love how good this sounds.

In the Mouth of Madness is a great later entry in Carpenter’s filmography. I didn’t know what to expect out of the film, but found myself consistently engaged by the characters and the world they inhabited. While the film is not perfect, it deserves a space on the shelf of any horror fan – especially fans of Lovecraft. This is one of Carpenter’s best later entries and Scream Factory has gone above and beyond with one of the best 4K scans in their entire catalog. The supplements are interesting and include a new commentary with Carpenter and his wife/producer of the film Sandy King Carpenter that was recorded for this release. If you are a Carpenter fan, it is time to purchase a copy for your collection. 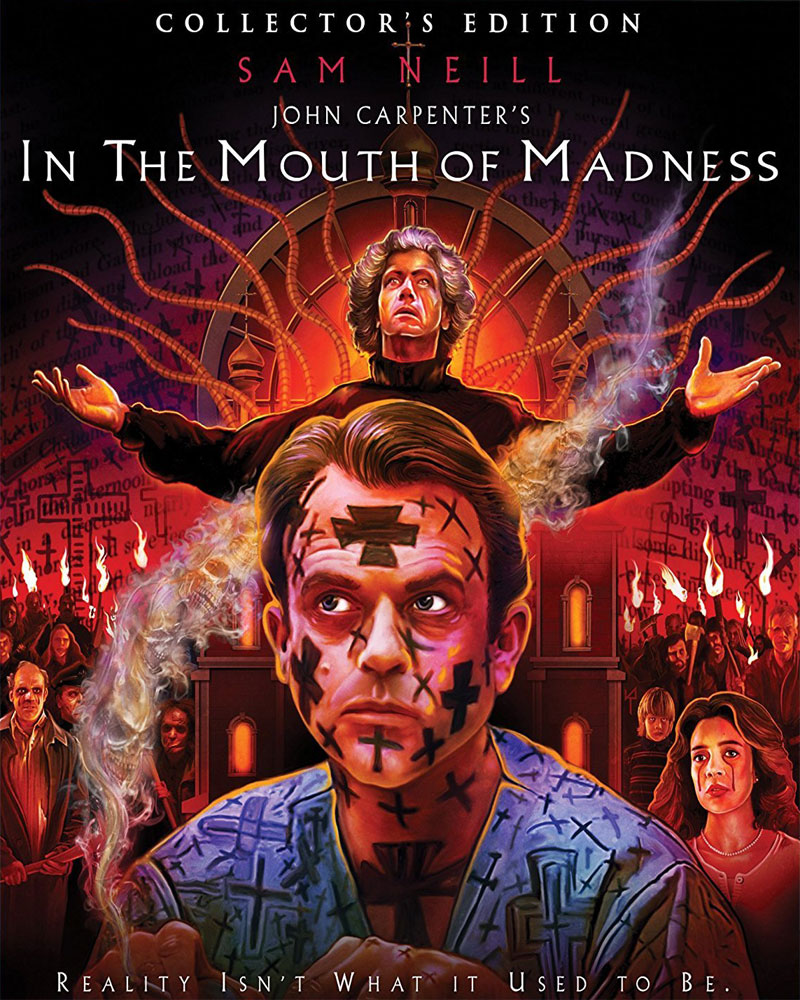