In the Aftermath (Blu-ray) 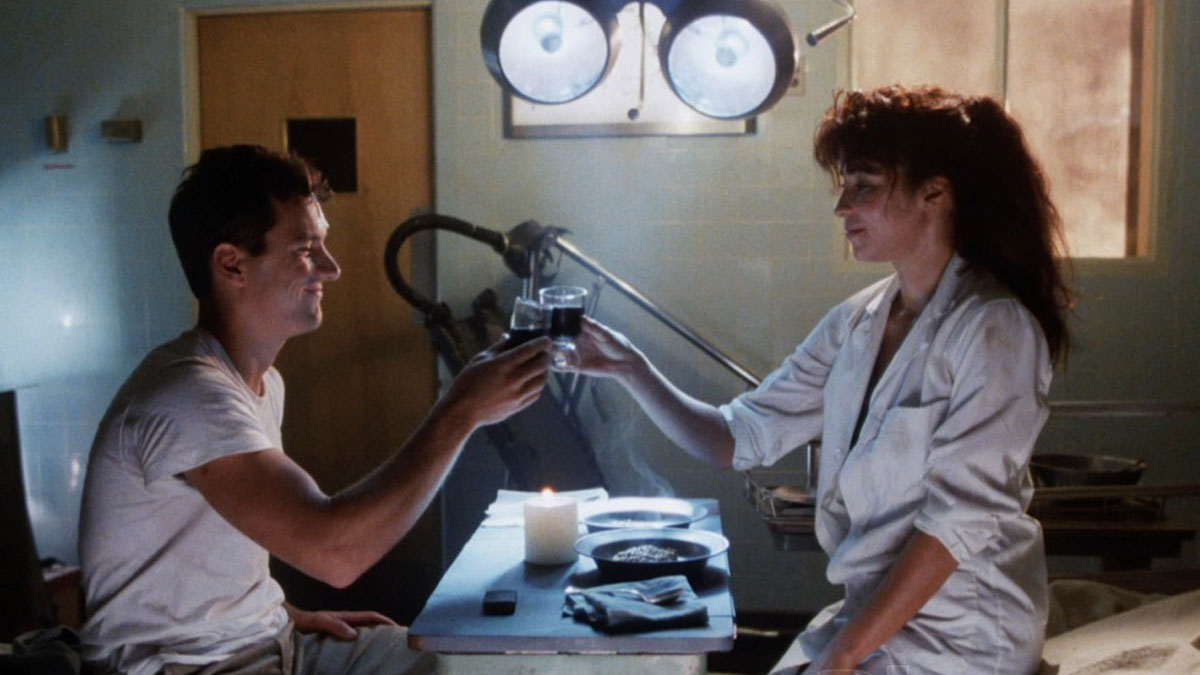 In the Aftermath is a New World Pictures release from 1988. At the time, the Roger Corman owned company was pushing out as many films as it could to satisfy the bustling VHS market. Corman is known for his ingenuity and his ability to stretch a minuscule budget. This occasionally lends itself to films that are experimental in nature. This is a strange one. Basically a surreal Japanese anime film called Angel’s Egg by notable anime creator Mamoru Oshii was licensed by New World Pictures for a very low price. This film is already known for being more of a dream than for following any type of narrative structure that makes sense. They took roughly thirty minutes of this film and tasked Carl Colpaert with mixing it with new live action scenes and a cobbled together script. The results? Umm. About as bizarre as you might expect.

Two guys in gas masks – Goose and Frank (Tony Markes) – walk a post apocalyptic wasteland. The air is toxic. When Frank stumbles upon a survivor breathing out of an oxygen tank, the survivor robs him for his purification system that has six days worth of oxygen. He steals Frank’s suit and leaves him for dead. When Goose encounters the survivor, he is gunned down. The psychotic survivor takes his purification system as well. Frank awakens and stumbles outside. He is fortunate enough to catch a vision of the young girl with an egg that may be an angel. He follows her and then passes out, He awakes in a hospital bed. His head has been bandaged. A woman arrives and introduces herself. Her name is Dr. Sarah Foster and she has put him in the only room that has a steady supply of clean air. The plot continues from there.

This is the second time this film has been brought to Blu-ray. Code Red released it in a limited run a few years back. I was excited to see what Arrow would do with the material. As expected they did a great job with the release and fans will be glad to see the film join their ranks.

The anime sequences in the film are visually striking and the live action sequences are fairly interesting. That said – these two elements never seem to match up with one another properly. Keep in mind – Angel’s Egg is a surreal film that is not meant to make perfect sense. Imagine if in the show Power Rangers they had cut to scenes from Fellini’s 8 1/2 instead of scenes of the giant monster fights from Super Sentai. That should help you grasp the sort of disjointed nature of the narrative here. In its own way the results are sort of mesmerizing, but anybody interested in this project working seamlessly will be disappointed in the extreme. I looked at the reviews for the film online and they could not be more divided.

I don’t really know where I landed on this one. The film does not in any shape or form have a cohesive plot but it is interesting. I would be lying if I said that it all works, but it isn’t like I turned off the movie either. Also of note – almost nothing happens in this movie. The live action scenes that are added in have very little that happens in them.

I kept thinking that the plot would pick up some steam. Allow me to let you know right now that it does not. I think the reason why people still care about this film is because of its historical context. This film came out in 1988 and was probably some people’s first exposure to anime. Akira was released that same year, so anime was still a new art form to American audiences.

At the end of the day, In the Aftermath is really an oddity. A rental would definitely be advised before a purchase. Fans will be glad to have an Arrow approved edition, but newcomers need to know what to expect out of it. Temper your expectations.

Presented in 1.85:1 aspect ratio with an MPEG-4 AVC Encoded image, the 1080p presentation looks nice. The transfer of the film was done in 2K from original elements, so fine detail is pretty solid. In all the live action scenes coloration of the film has that drained look typical of the time period, but the anime scenes look pretty neat still. Grain is evident but only in the sense that it looks like it was shot on fairly inexpensive film. I think it is safe to say that Arrow has provided the definitive transfer of the film.

Similar to the video, the audio presentation on In the Aftermath is solid if not totally mind-blowing. The LPCM Mono track does a good job of replicating the original sound mix of the film, but the original sound mix definitely leaves something to be desired. The music in the film would be better if it didn’t sound like a bowling ball continuously rolling on a wooden floor. Also, there is a persistent sound of breath in a gas mask that was pretty obnoxious at times. I can’t fault the track but I can fault whoever decided these noises would be something that an audience would enjoy.

In the Aftermath is a film that I had been curious about for a while. While the film is certainly a failure, it is still interesting as an exercise in repurposing. I wish that I had enjoyed the film more, but the plot never really goes anywhere. The anime portions of the film are visually exciting and interesting, even if they make little sense and do not fit in with the live action portion. This film is definitely an oddity and I imagine some people have good memories attached to the film for exposing them to anime in 1988. The supplementary materials provided by Arrow are very enjoyable and shed a lot of li. The new 2K scan of the film is surely the best presentation this film has ever received. This is a solid collector’s edition of a film with debatable merits. I can’t argue that the results are interesting, but it is probably not something I would return to again in the future.