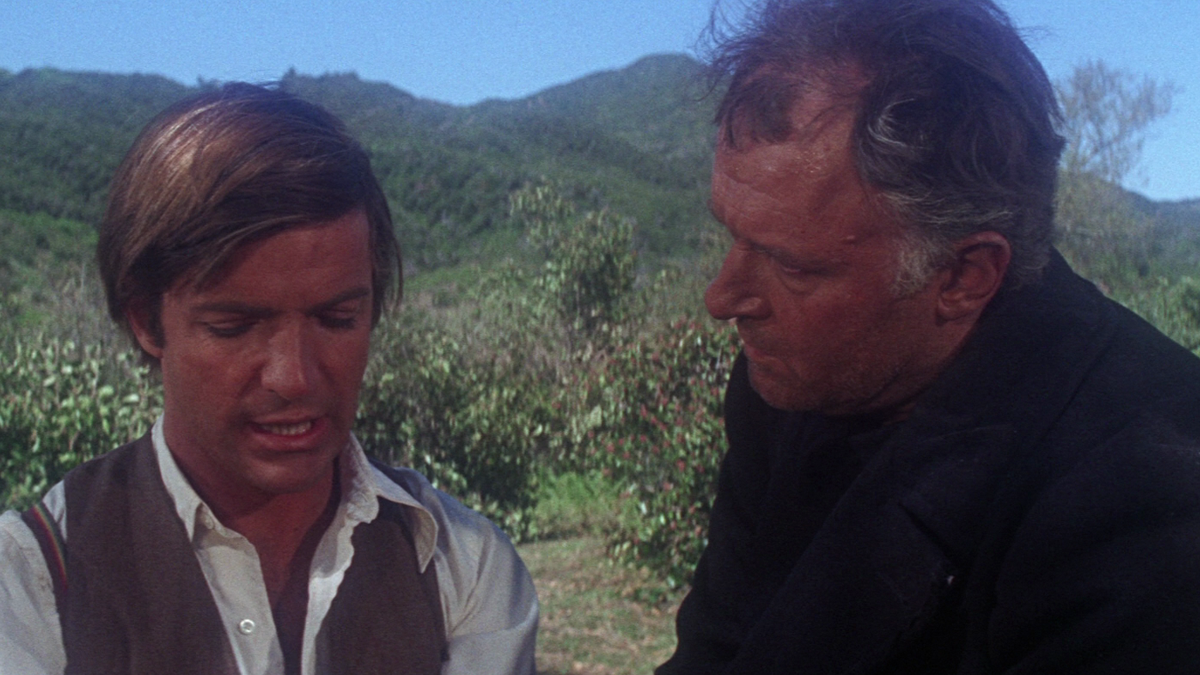 I must have been in the seventh grade when we were asked to read Ray Bradbury’s short story collection The Illustrated Man for our American Literature course. I was not always thrilled by the assignments of reading, but this was an exception to the rule. The collection of stories was dark and interesting and nothing like the other novels and short stories we had been tasked with before. I enjoyed the collection enough that I even did a full-size poster board where I drew all of the key moments from the book with astronauts screaming in space, lions on the veldt, and sunbeams. That year we also sat down to watch the movie version of the collection starring Rod Steiger and Tuesday Weld. If memory serves me correctly the teacher held up a poster board to block the brief nudity at the beginning and towards the end of the film. I had not seen the film since then, but was excited to watch it again now that Warner Archive Collection has put it out on Blu-ray.

As the film begins, a young hitchhiker (Robert Drivas) in the early Twentieth Century stops and skinny dips in a pond. Afterward, he meets a mysterious stranger (Rod Steiger) in a black pea coat as he warms himself by a fire. The stranger has a hot temper, a Pomeranian he carries in a bag, and strange tattoos he calls “skin illustrations” all over his body. The tattoos, if stared at for a little while, will show the gazer a possible future. This is why the illustrated man seeks to kill the woman named Felicia (Tuesday Weld) who gave him those tattoos. He met her on a hot day and she offered him some lemonade inside her house. He worked for a carnival at the time and was hoping to get laid. Felicia sat him down and began to tattoo him. The first tattoo she gave him was a rose onto his hand. She then tattoos an African sun and a lion which leads to the adaptation of the story The Veldt. This story involves a futuristic play room where children bring Africa and lions to life to the chagrin of their parents. The children do not want to see the playroom removed. In a tattoo of a rocket ship, the hitchhiker sees The Long Rain in which a group of four spacemen are stranded on a world with constant rain. The only hope is reaching a sun dome before they go deaf from the noise of the rain. A tattoo of two closed lips shows The Last Night of the World in which a couple discuss the news that the world would end later that night after some undisclosed earlier tragedy has eliminated most of the world’s population.

The Illustrated Man is an interesting film. As an adaptation of Ray Bradbury’s work, I consider it for the most part successful. Given time constraints and budget constraints, not every single story from the collection is covered. My favorite story from the collection, Kaleidoscope, was left out along with fourteen others. Therefore, this film only scratches the surface of the story collection. The adaptations are faithful to the source material and create a mood that seems to distrust the technologies and space explorations of the future. This distrust of technology has not been outdated and still feels relevant today, but the stories themselves are very much of the time in which they were written by Ray Bradbury in 1950. In many ways our future is dramatically different from what anybody could have guessed in 1950. Who would believe that NASA would stop manning explorations to other planets with human beings so quickly after we landed a man on the moon? Who would guess that most people would willingly put every aspect of their life on Facebook for people to see whenever they like? This film stands as a good example of some of science fiction’s greatest successes and failures as a medium to predict future outcomes.

Rod Steiger, Claire Bloom, and Robert Drivas are all enjoyable in the numerous roles they inhabit in the film. Each time the hitchhiker looks into the tattoos the characters in the stories are played by the three actors above. The direction by Jack Smite is capable and very much of its time utilizing the same soft-focus techniques of many films from that time period. I think the production and art design on the film are enjoyable despite owing a lot to Kubrick’s 2001 and Planet of the Apes which had both been released the previous year.

I enjoyed getting to watch the film after all those years and recommend checking it out if you are a fan of the short story collection. Replay value is somewhat limited on this release, so a rental is recommended.

Have you been dying to see Rod Steiger in full HD? Warner Archive have provided a brand new 1080p HD transfer that was remastered specifically for this release using an MPEG-4 AVC encode. The film was shot in 2.35:1 and is presented in an 2.40:1 aspect ratio. This film has a softer focus look that is reminiscent of other films of that time. The film was capably shot in Panavision by Philip Lathrop (who was cinematographer on the classic Point Blank amongst other films.) This film benefits from the distinct changes in setting that show off different colors – white interiors in The Veldt, blue rainy exteriors in The Long Rain, and fairly normal green and yellow exteriors in The Last Night of the World. Fine detail is good for the most part, but the soft focus techniques occasionally will make the film look a little muddy. I did not notice any big discrepancies in the color correction or large compression artifacts. Overall this is another good transfer from Warner Archive.

The Illustrated Man has been given a solid enough DTS-HD MA 2.0 track but it is dragged down by what it has to work with. This track is true to the original sound design, sometimes with a bit infuriating results. The film itself has been transferred to allow clear dialogue, but the original soundscape from then has been preserved as well. This means that when the sequence based on The Long Rain occurs, there is a crackly and somewhat awful sounding rain track that will come out of your speakers for a good fifteen minutes. My wife was losing her mind during this sequence, so I would guess it will annoy some other people. Overall, this track is limited by the original sound design but a good transfer of what was originally intended.

The Illustrated Man is a solid piece of Fantasy and Science Fiction from one of the most talented fantasists of the Twentieth Century. I really love the short story collection on which the film is based and I think the adaptation, despite some minor short-comings, is still an effective film. Rod Steiger and the other actors turn in capable performances in their roles. This movie will obviously only hit a niche crowd, but for those that remember the film it is a lot of fun to see it in high definition. With solid technical specs but lacking any in depth special features, this is going to be for fans of the film and story collection only. For curious viewers, I recommend a rental prior to a purchase.