If Beale Street Could Talk (Blu-ray)

When Barry Jenkins went to accept his award for Best Picture for Moonlight, it was probably not how he wanted his acceptance speech to be remembered. Warren Beatty and Faye Dunaway had awkwardly read out the wrong film as having won – La La Land – and Damien Chazelle and his cast had promptly come up to take the award. Then, they had to give it back to the people that made Moonlight. Barry Jenkins was cut short and the ceremony ended in spectacular fashion as one of the most bonkers moments in Academy history. To follow up his award winning film, Jenkins decided to adapt a novel from one of his personal heroes James Baldwin. The novel was If Beale Street Could Talk.

The film opens with this passage:

“Beale Street is a street in New Orleans, where my father, where Louis Armstrong and the Jazz were born. Every black person in America was born on Beale Street, born in the black neighborhood of some American city, whether in Jackson, Mississippi, or in Harlem, New York. Beale Street is our legacy. This novel deals with the impossibility and possibility, the absolute necessity, to give expression to this legacy. Beale Street is a loud street. It is left to the reader to discern a meaning in the beating of the drums.” – James Baldwin

The film is set in Harlem, in the Seventies. Alonzo (Stephan James,) lovingly known as Fonney, finds out his girlfriend is pregnant from behind the glass of a penitentiary. Alonzo is twenty two and his girlfriend Tish (Kiki Layne) is 19. Tish lets her mother (Regina King) know the news and then tells her father and sister at dinner time. Alonzo’s mother looks down on Tish and her family. She wields the Bible like a weapon to try to criticize Tish. When she is particularly cruel regarding the fate of the unborn child, her exhusband slaps her out of outrage. Her daughters are just as judgmental and callous. Alonzo was wrongly charged as a rapist despite overwhelming evidence that he was not anywhere near the victim at the time of the crime. The victim of the crime has fled to Puerto Rico. As Fonny faces an upcoming trial, Tish and her family do all they can to help him. Tish’s family scrapes every dollar together that they can to pay a lawyer and try to track down the victim that pointed out Fonny in a lineup. As that story unfolds the love story of Tish and Fonny is told through flashbacks.

If Beale Street Could Talk is a well-made film. The storyline is interesting and the characters are all believable. The cinematography by James Laxton who also worked with Barry Jenkins on Moonlight is very pretty. Regina King gives an excellent performance, an excellent which won her an Oscar. She is fantastic in the film. All of the supporting players in the film do the film justice. Stephan James and Kiki Layne are both pretty good in the film, but for some reason I felt like I never fully believed them in their roles. I am having trouble putting my finger on it, but they just seemed too soft spoken to me. Their actions at times in the film really felt like I was watching “acting” as opposed to “actions.” A scene where they yell in the streets after finding a place to rent comes to mind, but it is not the only moment that seemed to overreach.

All of the parts of a great film are there. But… the film suffers from something that is not uncommon in up and coming director’s films after they have had a triumph. The film pushes a little too hard to be an artistic statement. For me – I felt like the film suffered from overindulgence. There are too many scenes of characters just staring at one another. Too many scenes where the film tacks on an unnecessary beat of a few seconds. The film suffers from an artist unwilling to cut out a pretty shot. He fell too in love with doing his dream project, and I can not blame him. Adapting James Baldwin for your third film? That must have been a dream come true.

There are a lot of elements that work in the film. The soundtrack to the film is excellent. Equal parts jazz and string instruments with some beautiful songs from the era mixed in. I would listen to this soundtrack on my own time. The setting of the film really comes to life. It definitely manages to capture a time and a place well, transporting the viewer to Harlem. The film also makes a statement that is still resonant today. Innocent people are still arrested every day in this country. There is still racial discord that needs to be fixed. The film does an excellent job of exploring those issues.

Presented in the somewhat unusual aspect ratio of 2.00:1, Fox’s Blu-ray pulls no punches. This has a silky smooth vibe to it that seems to translate very well to the screen and certainly showcases the gifts of Barry Jenkins and cinematographer James Laxton. The film has a lot of earthy tones, though the dark scenes are never challenged with blocking or inconsistency. It’s a new to Blu-ray film, of course, but this is just one of those movies that seems to have been made for a home theater. It’s gorgeous.

This might be the textbook example of “less is more.” Fox’s DTS HD Master Audio track might only contain 5.1 channels, but how they’re used is really the key differentiator. Vocals are smooth, rich and textured. There was no distortion and the general ambiance that we were greeted with in the opening never seemed to cease. It’s got a few moments that will challenge the speakers, but all in all it’s a great-sounding mix that’s sure to please.

If Beale Street Could Talk is a good movie. I enjoyed the storyline and it has a great performance by Regina Hall. The film is beautifully shot and the soundtrack is incredible. Its thoughts on racial injustice are still very valid and worth exploring on film. That said, it is a bittersweet film that may leave audiences wanting to only see it once. It also could have probably shed another ten minutes of running time and been an even better film. I definitely recommend checking it out, but you may want to rent prior to a purchase. 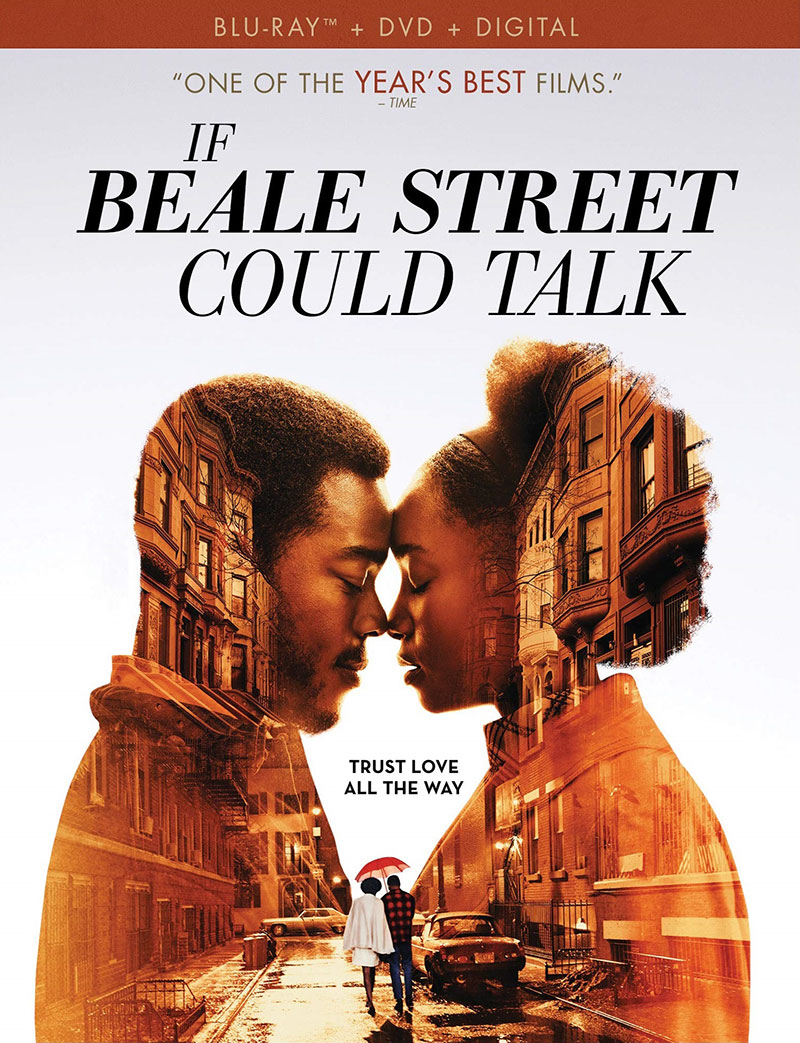