Margaret Ford (Lindsay Crouse) is a successful psychiatrist who has gained a lot of acclaim, but even she has inner problems to deal with. She lives a rather dull life and longs for some adventure, but she can never bring herself to tackle some excitement. So when she starts to fall for one of her patients, it can’t be seen as much of a surprise, as she longs for danger and things she’s never seen before. Mike (Joe Mantegna) is pretty much a shady character, with some criminal history and a serious gambling problem, but Margaret can’t help but be taken in by him. In an effort to add spice to her life, she asks him to allow her into his gambling career, which he agrees to after some time. As she ventures with him into these high stakes card games, her mission is simple and one well suited for her. She is to watch his opponents and learns their tells, or their mannerisms that reveal their hands of cards. The two strike an odd match, but perhaps they balance each other out, or perhaps Margaret is just allowing herself to be used.

I like House of Games a lot, but it doesn’t have the elements of a typical great film. The performances are good, the writing is good, and the direction is above average, but it the film ends up as rather subtle and simple at heart. I don’t think the film is thin by any means, but it just doesn’t spring to mind when I think of powerful films. I think that is because it all seems so natural, so real, that it is less like a movie and more like a slice of real life. Writer/director David Mamet plots a basic visual style that allows the dialogue to take the spotlight, which works to utter perfection here. The dialogue is sharp and very smart, but it is so natural in form, it just works in subtle touches. The pace is slow at times and things take some time to get rolling, but House of Games is more than worth the time and effort. I think fans of David Mamet will be most interested in this release, but I think anyone who wants a solid drama will be pleased as well. This new edition from The Criterion Collection has an improved transfer, plus some supplements, so this is the best release available.

I am not usually a fan of Joe Mantegna’s work, but in a few cases, he has really impressed me and this is one such turn. Mantegna is dead on within this role and in truth, I think this is his finest work to date. He has done some solid dramatic work other than this and also worked well in comedies, but here he seems to become his character. Even though he plays a rather dark character, Mantegna is able to bring across a certain charm, which is vital for this film. I don’t think this is an Oscar level performance, but this is a terrific turn and Mantegna’s finest hour.

House of Games comes to Blu-ray sporting a new transfer, looking a bit better than Criterion’s previous effort. If you want/need it, here is some of the specific technical jargon included with the disc.

I can only assume that means “this is the best we could do.” Comparing it with the previous Criterion DVD, there is an immediate uptick in image quality, improved contrast and overall look to the film. That said, it’s not one of their best efforts. But having reviewed Criterion titles for a couple decades now, if it’s put out by them, then it’s the best the film can look. The 1.78:1 AVC HD image does tend to look a bit soft at times giving it an almost dated look and feel, but it’s a step above their previous effort.

Included is an LPCM mono soundtrack, but the dialogue based nature of the film ensures that the mix is adequate. The focus here is dialogue without a doubt, so it was crucial to the film that it comes through in fine form. And it does, the volume is always proper and the level of clarity is always high, very crisp as well. That pretty much ensures a positive score, as music and sound effects are minimal at best. This film doesn’t need an intense sound mix, so this rather basic effort is acceptable.

The included extras appear to be identical to Criterion’s previously-released DVD (2007). At the time, these supplements were new, now they seem a bit dated.

I’m a fan of David Mamet’s films and written work. I don’t know, he just speaks to me. While I don’t think that House of Games is his one of his better films, especially in the realm of the “con” movie, it’s still pretty good. For me it begins and ends with The Spanish Prisoner (see Steve Martin play a bad guy!). Criterion’s offering of this Blu-ray is essentially identical, cover art and all, to the 2007 DVD. Yes, there’s a bit of improvement in picture quality, but aside from that – it’s identical. 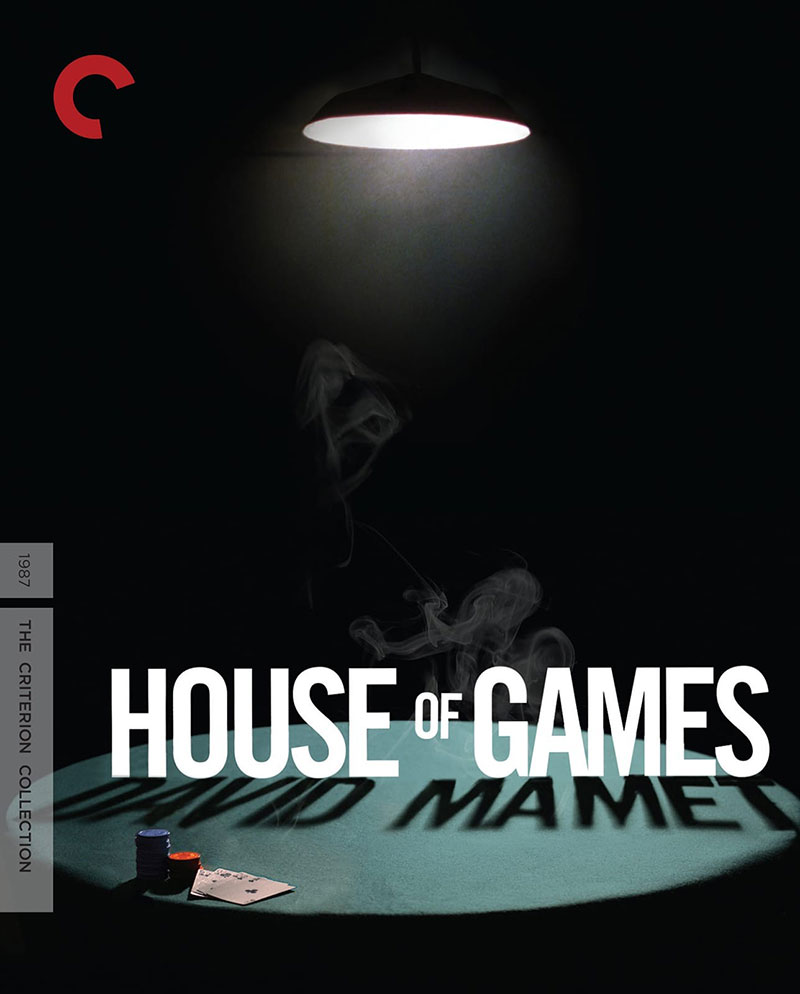