In 2010, Criterion decided to release the Japanese horror-comedy-art film-experiment House. It was an interesting move and one that I applaud. In more recent years, Criterion Collection has been veering closer towards releasing better received films and has seemingly abandoned releasing “cult” films with the exception of the occasional Japanese exploitation film (Lady Snowblood, Lone Wolf and Cub.) It’s a shame that they don’t release more of these types of films, because they do n excellent job on preserving the films and filming engaging supplements. Luckily, distributors like Arrow Video, Olive Films, and Shout Factory have picked up the slack.

The plot revolves around schoolgirl Gorgeous who has just found out that her father is remarrying a woman named Ryoko. With school break coming up she decides to go to visit her aunt in Karuizawa. Her friends are planning a vacation of their own with Mr. Tojo, but unfortunately it falls through. All seven of the girls (Gorgeous, Fantasy, Sweet, Kung Fu, Melody, Prof., and Mac) embark to visit her aunt. They bring along their enigmatic cat, Blanche. Along the way they meet an ominous watermelon vendor. At the house, Gorgeous’ aunt is wheelchair bound but shows them around the house. Then, one by one, the girls begin to meet their demise in strange fashions as the aunt seems to gain strength.

If that sounded strange, wait until you watch the movie! I have seen almost three hundred Criterion films, and this ranks up there with Branded to Kill as being one of the most batshit-crazy movies imaginable. First off, the film relies on all sorts of different effects such as animation, in camera tricks, matte-drawings, etcetera. There are more outlandish ideas presented in the first twenty minutes of this film than most films can jam into hours. There is slapstick that makes no sense such as a man falling onto a bucket that skirts him around. There are the wild transitions that all seem like they are out of other films.

Then there are the deaths of characters that are wildly imaginative. These deaths seem childlike and strange because they were based upon the fears of director Nobuhiko’s own ten-year-old daughter. Add in the awesome score by Asei Kobayashi and Mickie Yoshino with songs by Godiego that are strangely exuberant and upbeat, and you have a recipe for one of the strangest (most enjoyable). Out films I have seen in a long time.

As with any cult film, this will not be to everybody’s liking, but compared to seeing the same old thing, this movie is a breath of fresh air.

This was first released on Blu-Ray by Criterion in 2010 using an MPEG-4 AVC encoding with an aspect ratio of 1.33:1. The video quality for the most part is fairly high-quality, but it does suffer a little bit of softness from the way films were shot in the Seventies, especially low-budget Japanese films with tons of in-camera effects. I would love to see what this picture would look like with a 4K scan and how far Blu-ray has come since back then. I really love the look of this film, but the Blu-Ray is not going to be the same quality as more recent Criterion releases.

Similar to the video, this LPCM Mono track is high quality. There is nothing bad to report whatsoever in this department although dynamic range is limited, because the film was originally recorded in Mono. Dialogue is incredibly clear and crisp. The amazing music in the film by GoDiego and Asei Kobayashi and Mickie Yoshino sounds great and the lossless track opens up the soundtrack a bit. I did not notice any pops or hiss or distortion. This Mono track does not have any directionality whatsoever and may come off somewhat flat, but I believe this is going to be the best that this film can sound.

House is a really crazy film. One of the most over-the-top balls-to-the-wall experimental (art?) films ever made. I thoroughly enjoyed it. The supplemental features are almost as interesting as the film itself and come highly recommended. This movie needs to be seen to be believed. Highly recommended. 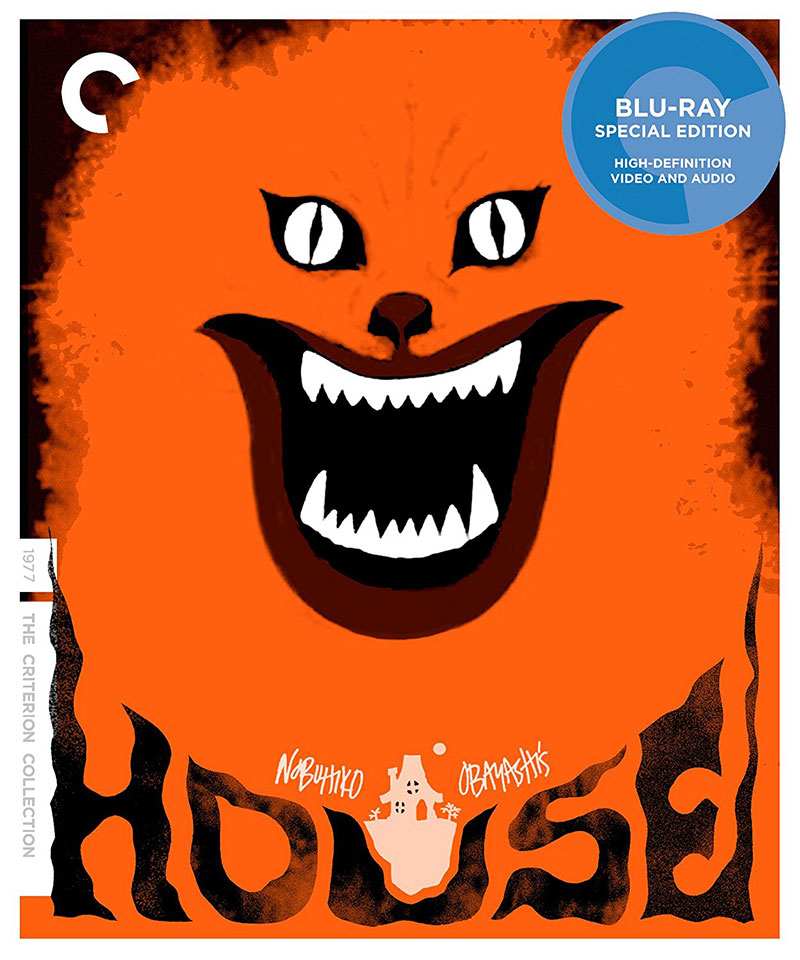