I’ll confess that I’ve never seen the first two Hotel Transylvania films. It may seem funny to start with the third chapter of a film series, but so be it. Adam Sandler leads the voice cast here, along with several others including Kevin James, Andy Samberg and David Spade, to name just a few. The film was another Box Office hit, which means we might be seeing a 4th chapter before long. I will more than likely sit that one out as this one did very little for me. I imagine it offers more of the same when compared to the first two, but having never seen them, I can’t confirm. I will say that I think the young ones, the intended audience will find plenty to enjoy here.

It’s 1897 and Dracula (Adam Sandler) travels to Budapest along with some friends. We see than Van Helsing (Jim Gaffigan) is on the train and hopes to defeat Dracula once and for all. Dracula manages to escape to safety, but Van Helsing hasn’t been stopped for good. We then cut to present day where Dracula is managing his hotel and has a daughter, Mavis (Selena Gomez) and her son Johnny (Andy Samberg). Mavis books a cruise for her father to try and cheer him up since he’s a bit down. Dracula soon falls for the ship’s captain named Erika (Kathryn Hahn). We learn that Erika is Van Helsing’s Great-granddaughter. Van Helsing’s plan is to ultimately kill all the monsters and eventually, Dracula as well. We then follow this trend of Erika and Van Helsing trying to defeat Dracula as he continues to try and win her over.

The plot should offer no surprises to anyone, but if you’ve followed the films this far, maybe this will do more for you than me. I felt this one was more of a cash grab before anything else. There were some mildly amusing bits, but this became a pretty touch endurance test before long. The animation is at least visually pleasing and some of the characters are fun to watch, but that’s about all the enthusiasm I can muster. While I can’t speak for the first two, I certainly hope they’re more rewarding than this one. I suppose young ones will enjoy it, but all others be warned.

Sony is dedicated to putting out some of the best looking Blu-ray transfers out there and they usually succeed. Truthfully, there’s not a lot that could make this one look bad. Generally speaking every computer animated film will look amazing and this is no exception.  The 1.85:1 AVC HD image is jaw-dropping in its presentation.  Colors are vibrant, subtle textures are so lifelike (pardon the pun) that you feel they’re in the room with you. Detail is accurate and black levels and contrast are solid. Likely you’ll know what you’re in for when you put the disc in your player, but in case you don’t – let me assure you that this looks the part.

The included DTS HD Master Audio soundtrack has a depth and presence to it that I really wasn’t expecting. While the front stage handles the action without a second thought, it’s the use of the surrounds that really made this a great experience. Channel separation made for a great viewing experience.  Vocals are crisp and clean and though the LFE don’t have many chances to strut their stuff, I caught a few instances. All in all it’s a great-sounding movie.

Feeling like nothing more than a cash grab, Hotel 3 became a chore to sit though. Having never seen the first two, I can’t compare, but surely they’re more enjoyable than this. I think one thing to take into consideration is that the intended audience may enjoy it, but it did little for me. Proceed with caution. There’s far better animated fare out there. 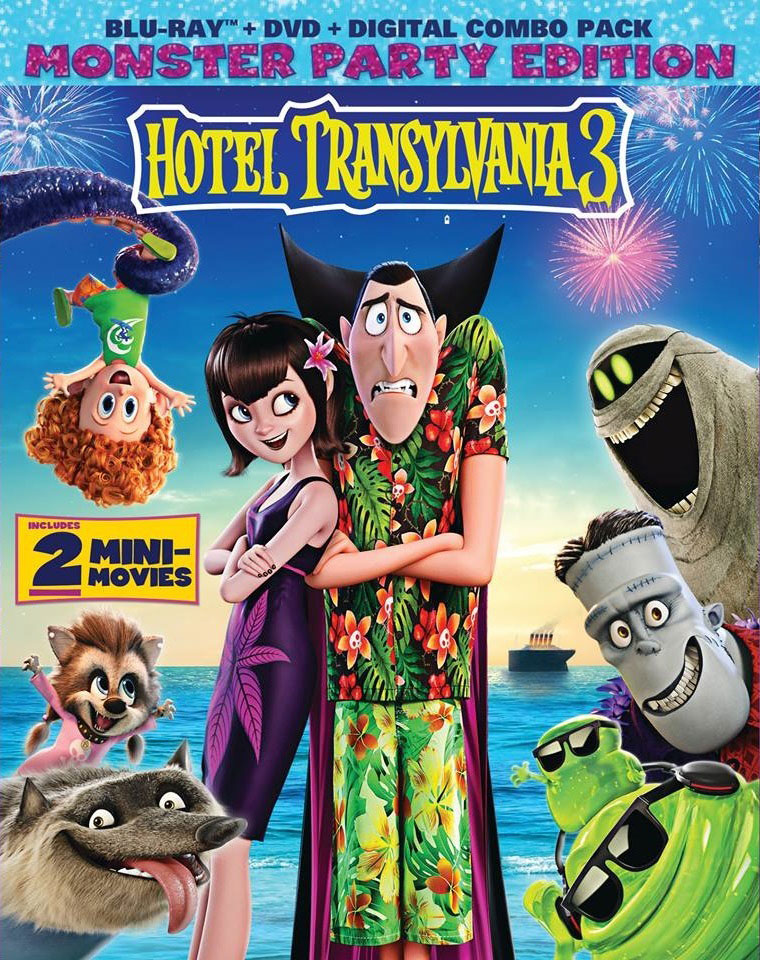