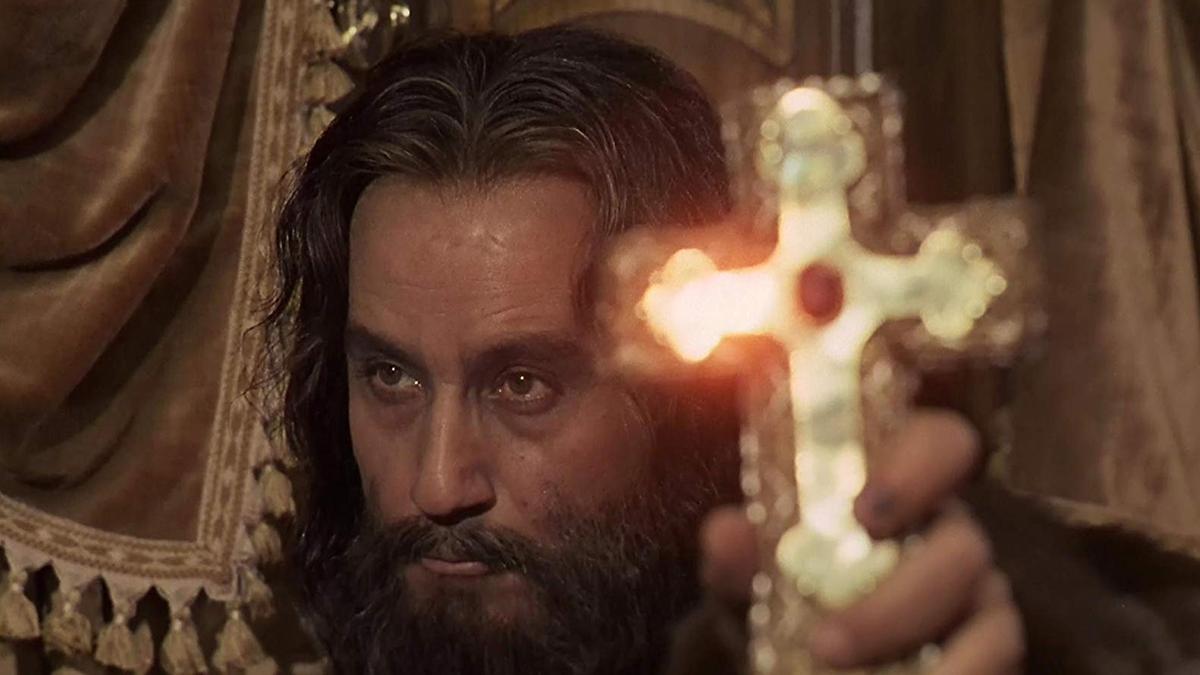 Arrow Video consistently supplies cult film lovers with a steady stream of worthwhile films. I was glad to see that they were bringing the fun and offcenter Peter Cushing and Christopher Lee vehicle Horror Expressonto the label. This film has been around in an amazing amount of renditions since VHS when it was thought to be a public domain film. Severin Films released it on Blu-ray several years ago, but I did not purchase a copy at that time. I was excited to see what Arrow did with the material.

The film begins in 1906. British anthropologist Sir Alexander Saxton (Christopher Lee) discovers a mummified fossil in a cave somewhere in China. At the Shanghai train station, Saxton bumps into Dr. Wells (Peter Cushing) and they exchange pleasantries. Wells introduces Saxton to Dr. Jones who has been assisting him. Saxton is informed that General Wang has requested his presence which clears up a small dispute in the ticket office. Meanwhile, a young thief drops dead on the train platform near the crate which Saxton was transporting. He had opened the lock to the case. His eyes had turned white and rolled into the back of his head. A priest named Pujardov proclaims it the work of the devil. He says that whatever is in the case is unholy and must be destroyed. When he tries to write the sign of the cross in chalk on the crate, nothing happens. Once the crate is loaded onto the train and the train departs, Saxton and Wells hear a noise emanate from the crate. When Saxton opens the crate the mummified remains are unchanged. When questioned by Wells on the noise, Saxton denies hearing it. When asked if he will need to feed what is in the crate, Saxton replies that it has not fed in two million years. Saxton and Wells then meet the Polish Countess Petrovski (Silvia Tortosa) and her poodle, Alinka. Alinka is frightened of the crate. On board the train is an engineer who can not understand why the chalk refused to write on the crate. Wells offers some money to the bagman to drill a small hole in the crate to see what’s in there. Saxton and Wells are booked in the same cabin when they meet a woman without a ticket attempting to escape Shanghai. With all the characters assembled, the red eyed monster soon unlocks his chains and makes its supernatural qualities known by killing a bagman, hiding his body in the crate, and locking the chains. The bodies begin to pile up as the train makes its journey and Inspector Mirov (Julio Peña) tries to find the murderer.

This movie is a lot of fun. The film is a mashup of so many different things. There is the familiarity of Peter Cushing and Christopher Lee from the Hammer Horror films, but in the film they are not playing nemeses of one another. The film has supernatural elements, a setup like an Agatha Christie novel, and even some takeaways from the classic short story “Who Goes There?” In other words, Horror Express is a wild (and occasionally bumpy) ride.

The film has some great character actors that I listed above, but the third act of the film belongs to an amazing turn of events that includes Telly Savalas. When he shows up in the film, it breathes life into the third act that sustains the film to the finish. This should serve as a screenwriting lesson to anybody who sees this film: it is okay to introduce a character in the last thirty minutes and make it a big deal. When you see what I’m talking about, you will know what I mean.

The film was made on a tiny budget independently, but due to some clever use of elaborate models and some excellent set dressing the film looks pretty great. Of course, Peter Cushing and Christopher Lee help sell the settings. Interestingly, Peter Cushing was grieving at the time of filming. His wife had just passed away and his heart was broken. As you can hear in the special features (and will hear three times) Christopher Lee had to convince him that the film would be fun and get his mind off things. Their friendship comes across in the film.

One of the best aspects of the film is the great score by John Cacavas. The score is beautifully done. In the special features Cacavas talks about how he took less money on the project so that he could hire a small orchestra for his pieces in the film. The final result was a theme that sounds as good to my ears as any iconic picture of that day.

Overall, Horror Express is a fun and ridiculous PG-rated film. Not everything in the film works and some will dismiss its “everything and the kitchen sink” approach, but I liked the film’s tenacity. It has something for everybody and on top of that it has Telly Savalas.

Arrow Video have provided a really good looking 1080p transfer of the film using an MPEG-4 AVC codec of a brand new 2K restoration from the original camera negatives and an interpositive. Here is what the booklet details:

“Horror Express has been exclusively restored by Arrow Films and is presented in its original aspect ratio of 1.66:1 with mono audio.

The original 35mm camera negative element was scanned in 2K resolution at Video Mercury, Spain, while an additional 35mm interpositive element was scaneed at R3Store Studios for Reel 5, which has been lost from the negative. The film was graded on Digital Vision’s Nucoda Film Master and restored at R3Store Studios in London. The mono mix was remastered from the original mag reels at Deluxe Audio Services.

All materials for this restoration were made available by Ignite Films.”

This film has existed in numerous incarnations since the VHS format. I have not seen the Severin release, but I can say that it is amazing how far this film has come from the shoddy public domain versions of it that were (and probably still are) floating around on DVD over the years. The film has a pleasing look and it is impressive what they were able to accomplish on such a small budget. This film has several scenes that take place in the dark that would be all but unwatchable if it were not for the Blu-ray format. Fans will want to upgrade if they have a DVD copy.

Arrow Video has provided an English LPCM Mono Track for the film. As can be expected, the film’s dynamic range is limited. There is some hiss that I picked up in my viewing, but overall it sounds pretty good. One of the best aspects of the film is its delightful soundtrack by the late great John Cacavas. The theme is fantastic and worth seeking out regardless of whether or not you watch the film.

Horror Express is a fun film that has a lot going on. It is all over the place and all the better for it. While the film will not appeal to some people, I enjoyed it a lot. It is just ridiculous storytelling played with a straight face by some great actors from Hammer’s golden age guest starring Telly Savalas and a killer soundtrack. It doesn’t take itself too seriously, and that is part of the fun. Arrow have provided a transfer that is a huge improvement over the public domain versions from yesteryear, but collectors with the Severin Blu-ray may want to do some research before double-dipping.