I can only imagine that one of the most frustrating things about being an actor and having had an “iconic” role is that you’re forever associated with that role. Now that’s not always a bad thing, but I’m sure Mark Hamill would have liked to have been known for something other than being Luke Skywalker. I’d say the same goes for Daniel Radcliffe who will probably forever known as Harry Potter. Sorry Dan, it’s a fact. Now, again, I don’t think that’s a bad thing. After all, that little wand and those glasses made him a very rich man and gave him the freedom to explore other options. He’s done Broadway and is doing his best to try and distance himself from being “the boy who lived.” But let’s face it – he’ll always be Harry Potter. To his credit, he’s trying. He really is. With his latest effort, he’s the antitheysis of Harry by being, well, a person with devilish horns growing out of his head. Director Alexandre Aja is noted for his visual flare, so let’s see if this is worth it.

We meet Iggy Perrish (Daniel Radcliffe) who is the prime suspect in the murder of his girlfriend, Merrin (Juno Temple). The media harasses Iggy seemingly non-stop and Merrin’s father (David Morse). What to do?  Drink!  Iggy over-indulges and awakens to find, well, horns growing out of his head. However, he soon finds that this new “gift” (if you could call it that) has actually driven people to confess their sins and give into their own desires. Yes, really. It’s here that the film could go a lot of different ways, but Iggy wants to use this newfound power to find out the truth as to his girlfriend. It’s also here that the story spirals off into never never land…

Admittedly this is a good concept for a movie, but to me it just seemed like it lacked focus. Certainly Radcliffe is good in his part and I respect that he’s trying to take some chances with some of his roles. I think what really confused me the most is that even the genre of the film seems to be all over the map. Is it a horror story? Revenge? Murder? Supernatural thriller? After the closing credits rolled, I really don’t know how to best classify this film. The supporting cast does a fine job, I’ve long been a fan of David Morse, though I felt he was a bit underutilized here. Still, it’s a pretty visually aggressive film that makes for a rather interesting watch. I’d recommend a rental first before taking the plunge to buy.

As perplexing as the film itself is, I have to say that the visuals are rather interesting and unique. The 2.39:1 AVC HD image clearly (pun fully intended) has that “pop” that really left an impression on me. The film has some dark moments, but some surprisingly light moments as well (part of the juxtaposition I suppose). Flesh tones seem very washed out in some scenes, but the detail is really first rate with the texture on the horns seeming so real that you could reach out and touch them. Again, it’s another fine effort and what we’ve come to expect from a new to Blu-ray film.

Oh yeah! This is what I’m talking about here! You want some muscle? I have to say that Horns has some really knockout scenes that really make use of each and every speaker in your house. Vocals are rich and pure, the LFE get plenty of use (more often in the third act than the first two) and the surrounds are constantly churning out something here and there. The front stage handles the majority of the mix, but with everything working in concert and firing on all cylinders, this is really one top notch DTS HD Master Audio presentation. Nicely done! 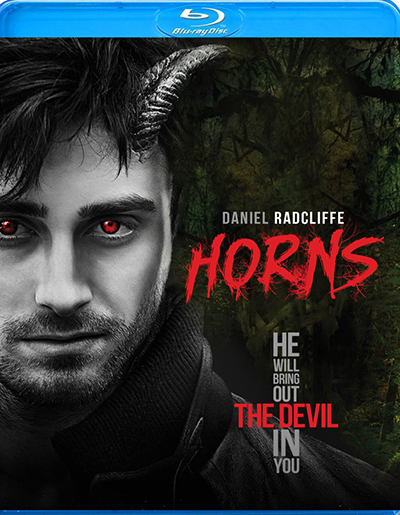