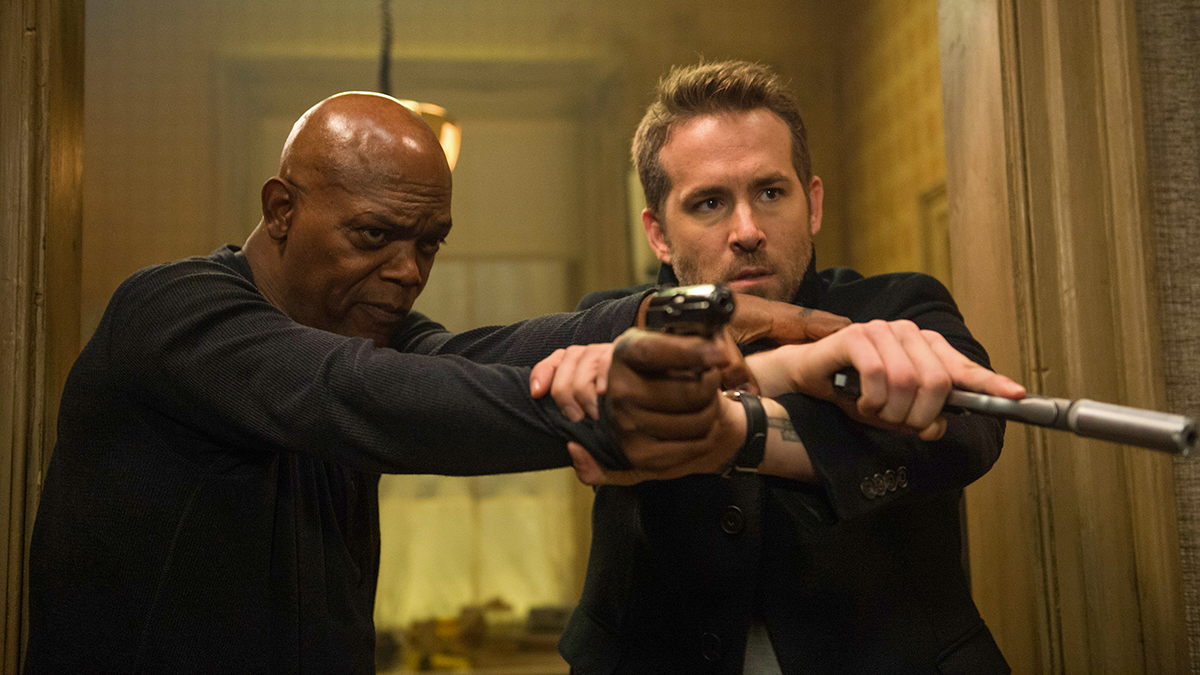 The Hitman’s Bodyguard would feel right at home had it been released in the late 80’s or 90’s. It has the staple of the standard buddy film that we used to get on a frequent basis. Two big stars? Check. A plot that finds them having to connect despite their differences? Check. An R rating with plenty of profanity and violence? Check. An enjoyable way to spend 2 hours of your time? Well, let’s not get carried away here. I think a lot of one’s enjoyment of this film will depend on how tolerant you are of Ryan Reynolds and his usual antics. Of course there’s Samuel L. Jackson as well, but indeed Reynolds is an acquired taste, if you will. My feelings on him are still mixed, and I find him more irritating than amusing most of the time. I did enjoy him in Deadpool, but that was a unique superhero film to say the least. It doesn’t help that the majority ofHitman does feel recycled from better movies of the past.

Bodyguard Michael Bryce (Reynolds) is hired to protect a Japanese arms dealer, but things turn problematic when the man is shot in the head and killed. We cut to two years later where Michael’s life has changed considerably. He used to be a well-praised bodyguard, but that incident didn’t help matters. We learn that a ruthless dictator of Belarus is going to trial for several of his crimes. Gary Oldman plays Vladislav Dukhovich. He’s widely hated by many, but the trial is pretty much an open and shut case as most the witnesses are executed. That is until Darius Kincaid/Evans (Jackson) shows up on the scene. He’s one of the world’s most notorious hitmen and stands to testify against Dukhovich. It’s up to Bryce to get him to the court with no interruptions, but things are never that easy.  Kincaid and Bryce are aware of each other and plenty of time is spent with the two of them bickering back and forth. Oldman is always an actor I enjoy watching, but he’s somewhat wasted here in the clichéd villain role.

As mentioned, your appreciation for this flick will really depend on your thoughts about Reynolds himself. I enjoyed moments of the film, but feel it was on auto-pilot too much of the time. The action sequences were routine and uninvolving and I never found the film that amusing at all. The constant bickering between the two leads grew old rather fast. I do appreciate getting an action flick today that earns its R rating and goes for it, but the script needed some work. It’s all too formulaic to garner much interest. The chemistry of the leads can only take it so far. I would’ve preferred maybe Ryan Gosling in the lead over Reynolds. There were scenes where I wasn’t sure what the filmmakers were trying to go for. The tone was a bit off during much of it, leaving it at odds with itself.

We get a quality transfer here as details are sharp throughout. This didn’t surprise me since it’s such a recent film, but you never know how things might turn out. There is indeed some bloodshed and the colors are deep and rich with no over saturation. The transfer is AVC encoded with a 2.39:1 ratio and will satisfy fans of the film. Background shots remained strong as well. I noticed that Oldman’s face looked quite bad in this film, but the details were even more evident here. There was a quick scene that might’ve explained this, but I’m unsure if it’s the actor himself or was written for his character. Regardless, I wanted to mention it.

Lionsgate is one of the few studios that doesn’t give you the shaft when you buy the Blu-ray. This, along with the 4K counterpart, contains a very active Dolby Atmos mix that’s sure to please. I’m still amazed at how good these Atmos mixes can sound. And this has just about everything that you’d think would be included in the movie – car chases, plenty of gunfire and just about everything in between. Bullets whiz by, tires screech and vocals sound superb. It’s everything a Dolby Atmos soundtrack should be and it’ll give your system a jolt of adrenaline while watching. A nice effort.

I can’t recommend this film even for fans of the two leads. It just goes through the motions and sits there. There are some good parts, but they don’t add up to a satisfying whole. Skip it.