It’s impossible to know how Hitman: Agent 47 might’ve turned out had the late Paul Walker been able to star in the leading role. Walker was originally attached to the role until his tragic death in November, 2013. Rupert Friend takes over, but I really don’t think it matters who plays the Hitman since there seems to be so little acting required. Many might vaguely recall the 2007 film with Timothy Olyphant in the lead role. I hardly recall that film outside of the fact that it did little for me. Agent 47 attempts to reboot the series, but with minimal results. Just like the recent Transporter reboot, it’s doubtful that many people demanded another Hitman film, but the powers that be saw potential. The film does have its charms so long as one doesn’t expect too much.

The film begins with a prologue where a Dr. essentially creates a super solider type of program. The goal is to create genetically superior warriors out of clones. The Doctor has disappeared, but a group known as “The Syndicate” hopes to mimic the Doctor’s program, and they begin a search for him using their own super soldiers. The soldiers use the Doctor’s daughter Katia (Hannah Ware) essentially as bait to find the Doctor. Enter: Agent 47 (Friend). Ultimately, he teams with Katie to try to protect her and uncover mysteries of her ancestry. A mysterious man named John Smith (Zachary Quinto) shows up, but his motives are murky at best. From here on out, we get several chase sequences and plenty of action as the “Syndicate” searches for 47 and Katia.  Admittedly, it is nice to see an R-rated action flick like this make something of a return even though the action itself is the largest selling point here. The acting is wooden, and there’s a bit of repetitiveness to the whole proceeding. Still, for those in desperate need of an action dose, the film should at least whet the appetite a bit.

If you’ve ever seen an action film, pick one, then you’re already familiar with Hitman: Agent 47. And if the title rings a bell, well that’s been covered above. I will say that the visual presentation is pretty darn good and it does embody what we’ve come to expect to be the “norm” on Blu-ray. The 2.39:1 AVC HD image is sharp as a knife, offering up detail so realistic you’d feel as if you can reach out and touch it. Of course the film has meaning, so some of the more stylized scenes rely on some camera tricks, but do give a very unique look and feel. Black levels are solid, contrast is fine and I was really scratching my head to find much, if anything to complain about here. I was left out in the cold. Your opinion of the film might be low, but I will say that it looks amazing.

Accompanying the visuals is a kick ass DTS HD Master Audio soundtrack. I will say that this is one that you can turn up the volume, sit back and be amazed. The experience is an aural orgasm with sounds creating a dizzying experience that certainly fits the theme of the film. Vocals are pure, surrounds play a big part as do the LFE which earn their keep here. The sound of a bullet through flesh and the screeching of tires never sounded so good. Like the visuals – this is amazing.

So long as you’re not expecting too much, Agent 47 can be a bit of fun. The film moves at a quick enough pace, and offers a good dose of R-rated action that should please a certain demographic. Rent it. 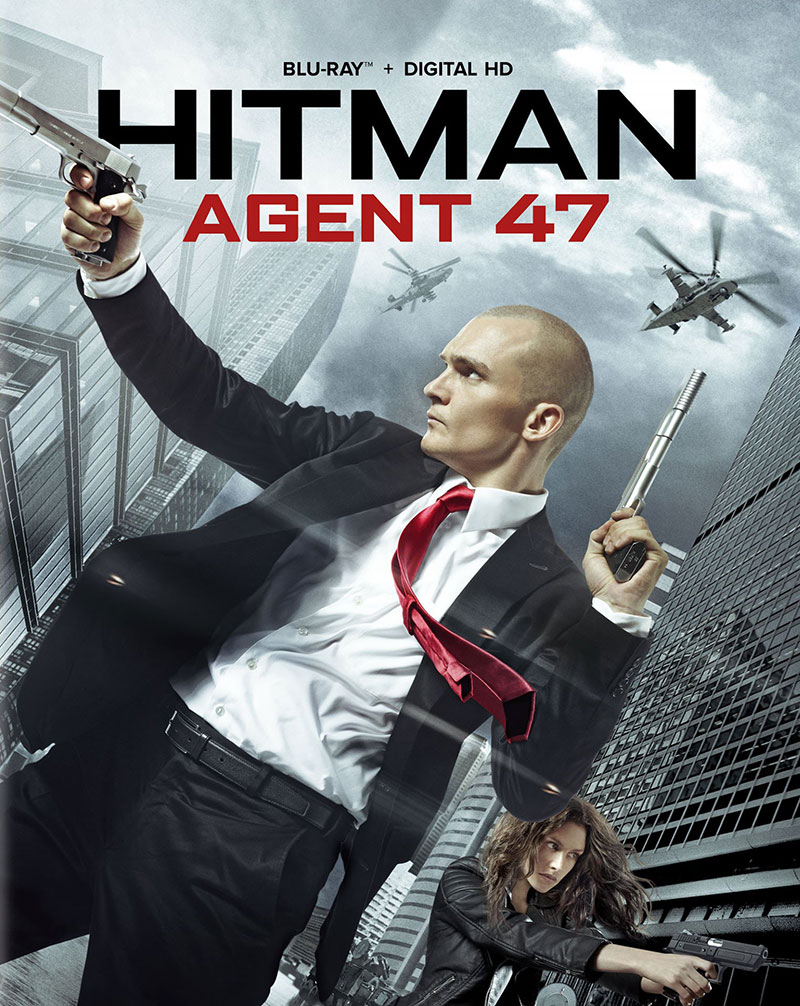