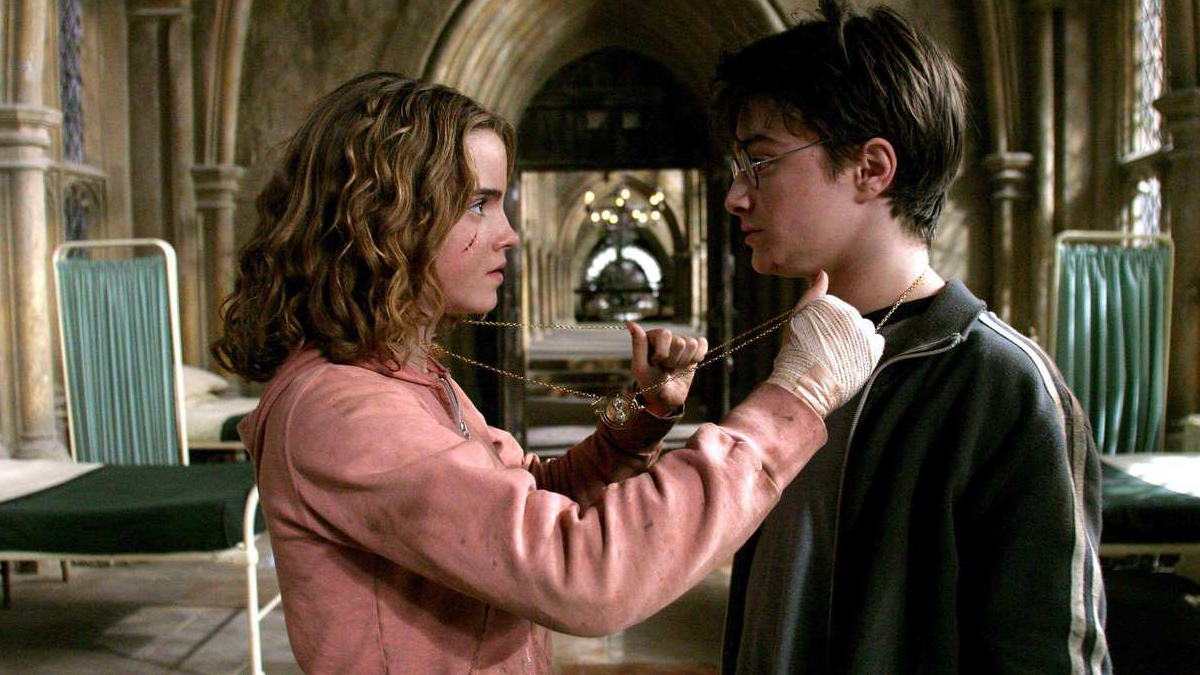 Harry Potter (Daniel Radcliffe) is about to start his third year at Hogwart’s, but there is a dark cloud around the school. This year, Harry has to contend with the usual worries, like his magic, his Quiddich games, and his friends, but he also faces grave danger. The madman Sirius Black (Gary Oldman) has escaped from the Azkaban prison. The prison was supposed to be impossible to escape from, thanks to bonds and obstacles of both physical and magical varieties, but Black managed to leave Azkaban behind. And the buzz is that Black will come to Hogawart’s and seek out Harry, but not with good intentions. Potter is told that Black will arrive to finish off his master’s work, which was to murder Harry and his family. At the school, new teachers arrive and so do wraith like guardians, all while Harry prepares for Black’s arrival. As all of the students adjust to the new precautions and the faculty changes, Harry tries to learn more about Black. This leads him to Black’s past and as he learns more, he finds out more about himself. But what is the real connection between Potter and Black, the stories he has been told, or some unknown connection?

The books in the Harry Potter series have been blockbusters, so of course, cinematic versions have followed. The films pulled respectable box office, but were panned by critics and even loyal book readers were often disappointed. The first two Potter films were overly long, meandering, and in some scenes, out and out dull. The productions were well funded, but sported low rent special effects and the much promised magic was, well…as flat as a pancake. This third installment marked some serious changes in the series however, as we were promised a darker, more polished effort, complete with a new director. I have to admit, Prisoner of Azkaban is better than the first two movies, but this sequel still falls short of expectations. The darker tone is there, but only by a few shades, as this is still a film aimed at a younger audience. I suppose younger fans will see it as much more dark, but blue tinted visuals and mean expressions aren’t enough. If you’re a diehard Potter fan, then you’ll probably force yourself to like Harry Potter and the Prisoner of Azkaban, but the fact remains, this is not a good movie. The same bargain basement special effects show up, while story is limited to short bursts that don’t always weave together. But rest assured, more films in the series will follow, as long as the books sell. Warner’s disc looks and sounds good, but is stuffed with short, useless bonus materials. So for Potter nuts, Prisoner of Azkaban is worth a look, but a rental is the best option.

If the producers want to make all of the books in the Harry Potter series with this same cast, then the pace has to be quickened. This is only the third film and lead Daniel Radcliffe is too old for the part, which demands a year between volumes, not two or three. So by the time the seventh book is rolled into production, Harry Potter will be in his thirties, or at least close. But in truth, the reality of the entire run being produced is slim, as the cast is aging much faster than the material allows, which means bad news. The producers have to pick up the pace and rush the productions, or cast new stars in the later volumes. In the case of Radcliffe, that might be good news, as his performances in the series have been dismal. He might bear a slight resemblance to the artwork of Harry in the books, but he brings a flat, lifeless presence to the screen. A more potent, skilled actor could inject more life and yes, magic into the role. Rupert Grint is as unfunny as a comedic sidekick can be, but he returns for this third installment. The lone bright spot is Emma Watson, who has decent presence and stands out compared to her lame costars. The adult cast members are solid however, with Alan Rickman, Michael Gambon, Ralph Fiennes, Brendan Gleeson, Jason Isaacs, Maggie Smith, Miranda Richardson, and Gary Oldman all involved.

Harry Potter and the Prisoner of Azkaban has perhaps the most unique visual presence to all of the Harry Potter movies to date. Director Alfonso Cuarón took a few liberties with the franchise and it paid off. The films encompass the entire palette, but this one seems to shift a bit towards the darker side (figuratively and literally) as evidenced by the presence of the Dementors. This 2.35:1 HEVC 4K transfer has been given new life. Colors are bold, detail is amazing (there’s always something going on in the background at Hogwarts) and flesh tones are right on the mark. Contrast is also nearly perfect. Like the rest of the films in the series, if you’re looking for the best visual presentation then this is where it both begins and ends.

Admittedly when watching this film I wasn’t expecting that much. Why? I don’t know. All of the Harry Potter films have very robust soundtracks and this DTS X mix is no different. Vocals are strong and well-centered and the surround effects occur early and often. Take, for example, the dementors – their approach activates the rear surrounds and you can almost feel the cold that their presence symbolizes. While the majority of the action takes place in the front stage, the LFE do come into play as well adding some surprising depth to the mix. Case in point, when Harry first yells “Expecto Patronum!” you’ll feel it. Literally.

In spite of what I’d written earlier (and this was written some years ago), I now consider Harry Potter and the Prisoner of Azkaban my favorite of the series. It somewhat loses the “childish” motif of the first two, but is nicely nestled before the series became dark that led to the final installments. Alfonso Cuarón’s direction is impeccable. I love the look and feel of the movie as well as the new characters that are introduced (Sirius Black and Remis Lupin). If I could only own one Harry Potter movie, this would be it.