Harley and the Davidsons (Blu-ray)

I have to admit that I have absolutely no interest in motorcycles. None. I used to live in an apartment complex and every Sunday a biking club would crank up their Harley’s and ride by my place and they’re loud. I mean really loud. And heaven forbid if you get into an accident on one of those things. I’ve not seen many motorcycle accidents in my day, but I’m willing to bet that the ones I’ve seen the rider walked away. I just don’t see the appeal. Now, having said that, I can appreciate the beauty of some of these machines. I watched the reality television series American Chopper for a few years and the detail and design of some of these bikes is simply amazing. But, let’s face it, when you think of a motorcycle, you think of Harley-Davidson (or at least I do). And I’ll freely admit that I only requested this set as my Dad watched it and loved it. So much that he actually went out and purchased a motorcycle after seeing it. How’s that for influential? We’re all in the process of trying to convince him to change his mind as we fear he’ll end up on the side of the road. Still, we’ll hopefully never have to cross that bridge and let’s get on with the review, shall we?

The series consists of three episodes, each running about 80 minutes and we meet the main players very early on at the turn of the 20th century. Walt Davidson (Michael Huisman) has just lost his land to the railroad and his brother, Arthur (Bug Hall) is trying to make ends meet. Bill Harley (Robert Aramayo) is an engineer with aspirations towards college. The three manage to put together a rudimentary bike out of spare (and stolen) parts in a shed. The series actually follows the trio as they continue to improve their design, garner some attention to the name and try to outpace their main competitor – Indian. We follow the company through highs and lows, see World War I and Harley-Davidson’s role in that as well as how they cope with the Great Depression. It’s important to note that this isn’t a totally factual re-creation of what really happened. There have been some creative liberties taken for television, but by and large it’s all true.

This is the first miniseries produced for the Discovery Channel and if the ratings were any indication, we’ll see more original programming in the future. Admittedly it was an interesting watch to see the history of one of the most iconic names in motorcycles. I still have no interest in riding, ever, but this goes to show that if a story is told correctly – anything can be interesting. The performances are all generally strong and we don’t get too many familiar faces. One name that I recognized was Dougray Scott, but aside from that, I haven’t seen these actors in much else. I would imagine that anyone who has even a passing interest in riding or simply how companies get built and the inherent risks involved in “making a go of it” will get a kick out of this show.

The three episodes are all presented in a 1.78:1 AVC HD image that looks pretty darn good. The entire series seems to have a more natural look and feel to it, like it’s got a brownish filter over it. That’s my way of explaining it, of course, but I had no real complaints with the way this looked. Detail is adequate, some of the scenes looked amazing and others the tweed suits seemed to have a bit of moire to them, but it’s easily dismissed and I thought nothing of it. It’s new to Blu-ray and looks every bit the part. Viewers won’t be disappointed.

I feel that there might have been some missed opportunities here and though we get a DTS HD Master Audio soundtrack, I was expecting a bit more. I mean, what’s more exhilarating than the roar of a motorcycle as it revs up? There are several race sequences which give a good sense of range, but the majority of the series is dialogue and it sounds the part. I realize this wasn’t supposed to be the epitome of what your home theater setup can do, but I feel that some of the more technical scenes could have benefitted from a bit more “heart.” Still, no real complaints here.

Not a lot to choose from here, which was kind of disappointing.

Harley and the Davidsons is, no doubt, euphoria for anyone interested in motorcycles. But it also tells the tale of how a company got started and persevered through adversity. The Blu-ray both looks and sounds good and though the lack of any substantial extras is a bit off putting, it’s a great watch. 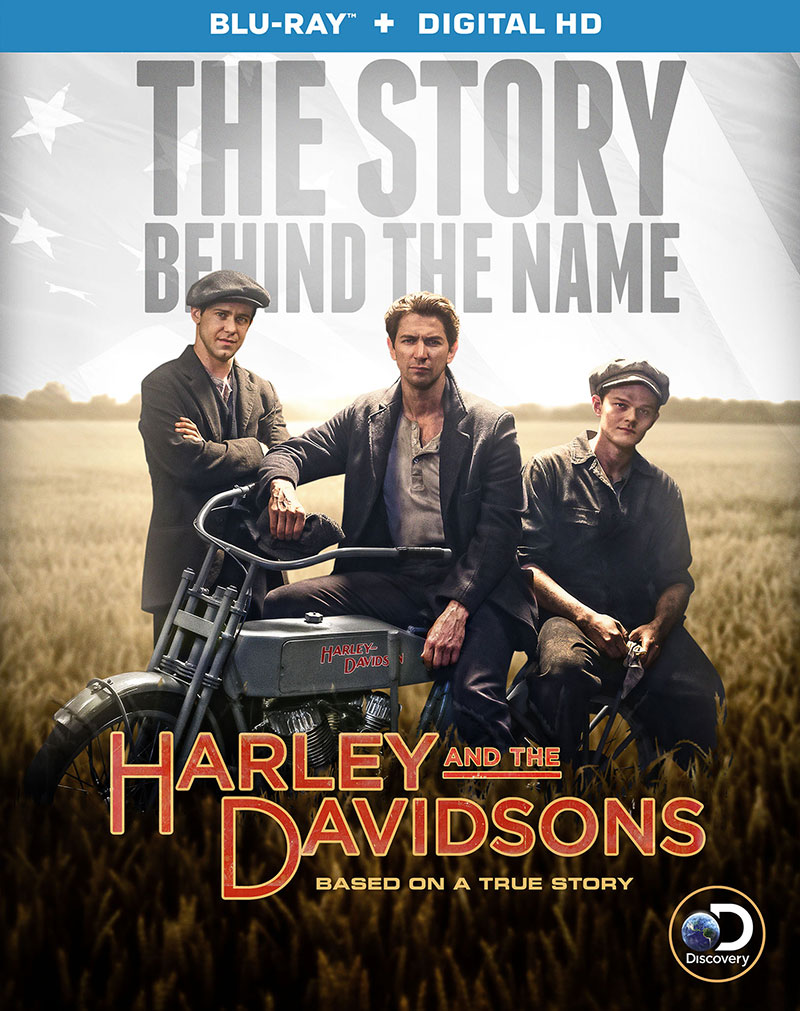