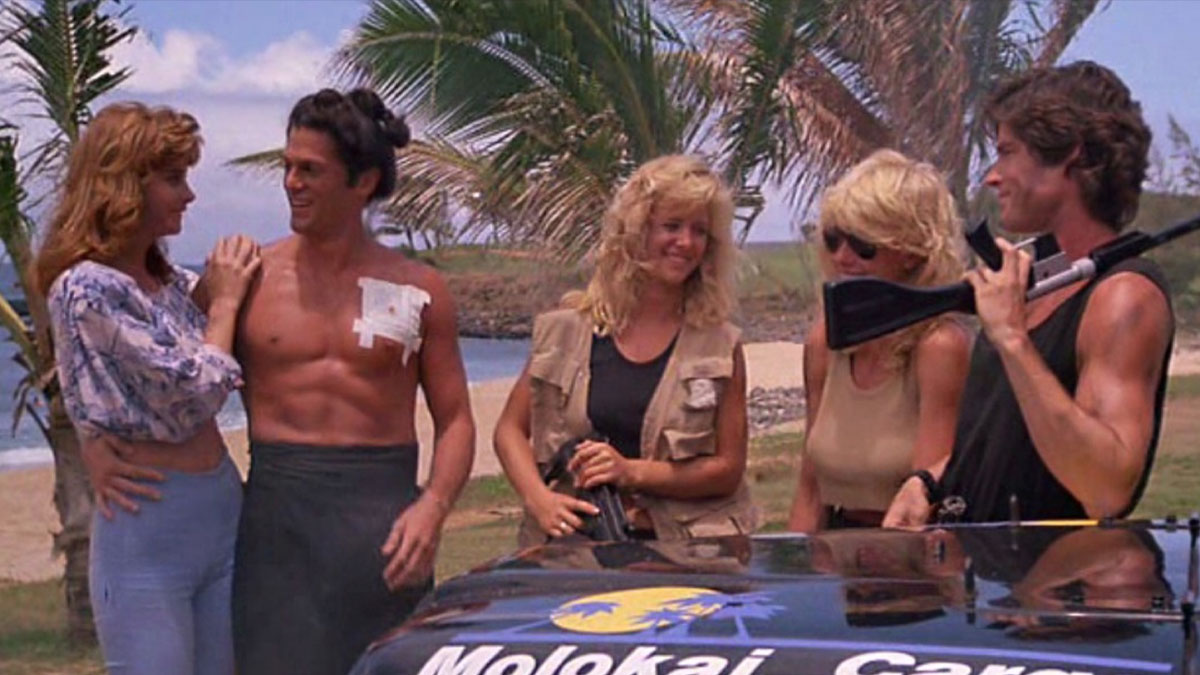 After viewing Malibu Express, another film directed by Andy Sidaris, I had more of an idea what to expect with this film. Hard Ticket to Hawaii should please fans of Malibu, and those who’ve seen that film should at least know what they’re in for. I imagine most viewers who sit down to watch this new Blu-Ray will be already established fans just happy that the film is available in HD. While these two films have given me my fix of Sidaris films, I felt hard ticket was a bit more enjoyable. Once again the plot is mainly an excuse for action and nudity, but I felt it went down a bit easier this time. It could simply be that I was more accustomed to how things would play out, but who knows.

Set in Hawaii, we follow two undercover federal agents who free a killer mutant snake by accident, while also discovering a large cache of diamonds. This sets in motion a bunch of henchmen after our two female leads to obtain the diamonds. It’s all a bit straightforward, but again, it’s largely an excuse for the endless mayhem and nudity. The Malibu Express yacht is even seen briefly in this film, adding a nice continuity. Cynthia Brimhall and Patty Duffek both star as the two leads. The film embraces its B-Movie roots as it never pretends to be more than that. The mutant snake can be frightening at first, but the more we see it, the less frightening it becomes. Things move along nicely that we can hardly stop and think of the silliness of it all.

I enjoyed this film OK even if my thoughts were the same as Malibu Express. It’s nothing I feel the need to revisit, but I’m aware it has its fans. Still, it’s nice to see a film not take itself so seriously, something that’s sadly forgotten with more modern films lately. If all this sounds appealing to you then perhaps you should visit Hawaii and give the film a try.

I was less than impressed by the visuals of Malibu Express, but thankfully the results here are much more pleasing. The case mentions a 4K restoration and the results impressed me much more this time around. The background shots and details more much sharper here than with Malibu. The transfer isn’t perfect as there are some traces of grain, but otherwise there’s a welcome clarity that’s very welcome here. I feel fans will be pleased overall with the results here. The image is AVC encoded with a 1.78:1 ratio.

The DTS HD 2.0 track works fine, but a more robust track would’ve opened up the sound field a bit. Still, it works well enough that it never became a worrisome track. Vocals have the clarity I want and it keeps us involved. While not as strong as the transfer, this track works well for the film at hand.

I won’t lie, Hard Ticket to Hawaii didn’t do much for me, but I understand it has a good cult following. Fans will be happy to know that the disc is solid, with a good clean transfer and some decent extras. I don’t need to see it again, but for fans, this will be worth picking up.