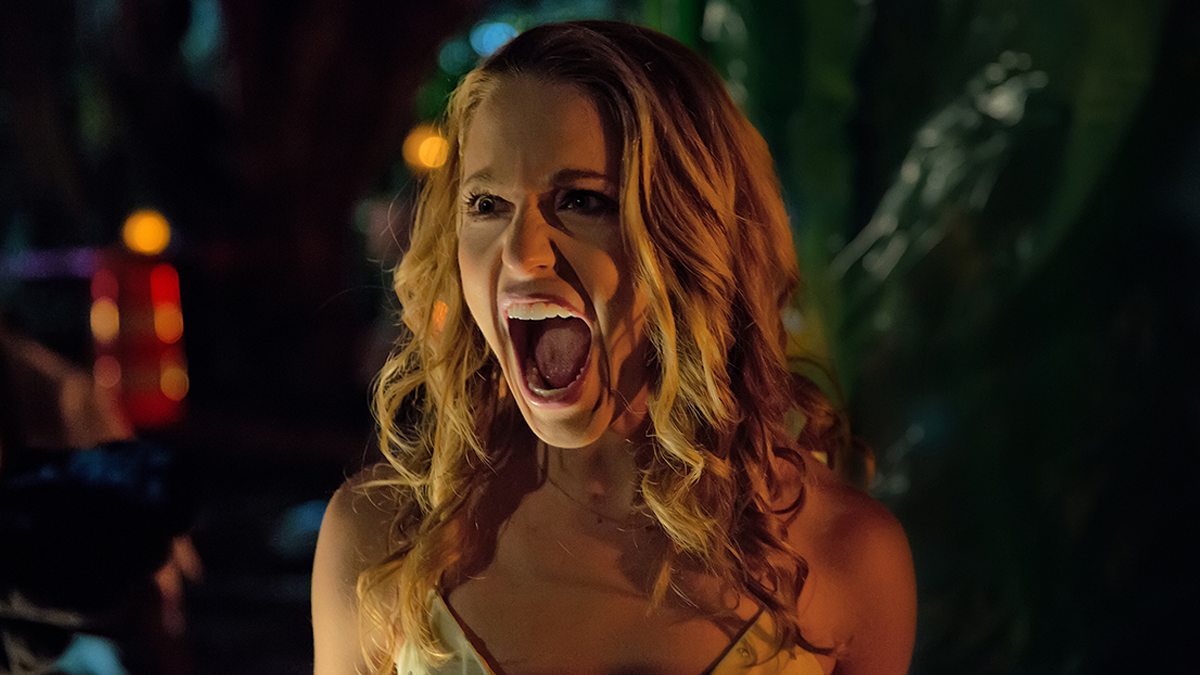 I’m willing to bet that there are certain genres that will never go out of style. Horror is certainly among them. People love to be scared. But people also like to laugh. Horror/comedies are nothing new, but what is new is the concept of a “second chance.” Anyone with a passing interest in this film knows that it takes the Groundhog Day approach meaning the main character gets to live the same day of his or her (her in this case) over and over. The “benefit” of this is that the character will eventually come to the realization that something is wrong and they’ll finally find a way to circumvent it by having a “perfect day.” In the real world we don’t get that chance, so it’s somewhat voyeuristic to witness a film like this (and the list continues to grow).

Tree Gelbman (Jessica Rothe) isn’t the nicest person on campus. She’s an arrogant sorority girl who thinks she’s better than everyone else.  When we first meet her, she awakens, hungover, in a dorm room of Carter (Israel Broussard). And it’s her birthday. Not a good start. We follow Tree through her day as she manages to offend and isolate those around her including her sorority sisters, her teacher (who she’s also having an affair with) and a would be suitor. Her special day culminates when she’s, well, murdered. She awakens again and as we know by now, she’ll repeat the same day of her life trying figure out who’s killing her and why.

There have been a few movies that have taken this approach and I’m a fan of it. But even I have to admit that the “genre” is a bit tired and I think these need to be fewer and further between. Earlier in 2017 we were treated to Before I Fall, which took the same “living the same day over and over again” approach, though I did enjoy it. Tom Cruise and Doug Liman teamed up with Live.Die.Repeat: Edge of Tomorrow with similar results. So maybe I do like these films and want to see more of them after all? This approach does give us a unique perspective and the film’s saving grace is that it doesn’t seem to take itself too seriously (pay particular attention to the last line). Rothe (La La Land) carries the film from beginning to end. We’ll be seeing much more of her.

I’m running out of ways to say this, but for the sake of this review I’ll indulge! Universal’s Blu-ray finds its way to the format sporting a very good-looking 2.40:1 AVC HD image. By and large, the color palette used is very colorful, save for a handful of nighttime scenes. I don’t know where the movie was filmed, bu the campus seems bustling with life and color (pardon the obligatory pun). Definition is razor sharp, the color spectrum is in full force and none of the usual ailments that might detract aren’t present here (artifacting, shadow noise, etc.). Suffice it to say this is another winner and with it being a new to the format disc, we shouldn’t be surprised.

The included DTS HD Master Audio soundtrack has a few moments to shine and the usual “jump scares” that are a part of any horror movie got me a few times. By and large, the soundtrack is used to promote some ambiance with the surrounds at a party of a car chase scene. The vocals take front and center here and with great effect. It’s a pretty standard offering here and one that’s sure to please.

There’s a lot to like about Happy Death Day. If you can parse out the subject matter and have a good time with it (as the filmmaker’s did), then it’s a joy to watch – dare I say it…again and again! Universal’s Blu-ray both looks and sounds good, though the supplements feel a bit by the book. Nevertheless, enjoy the ride.