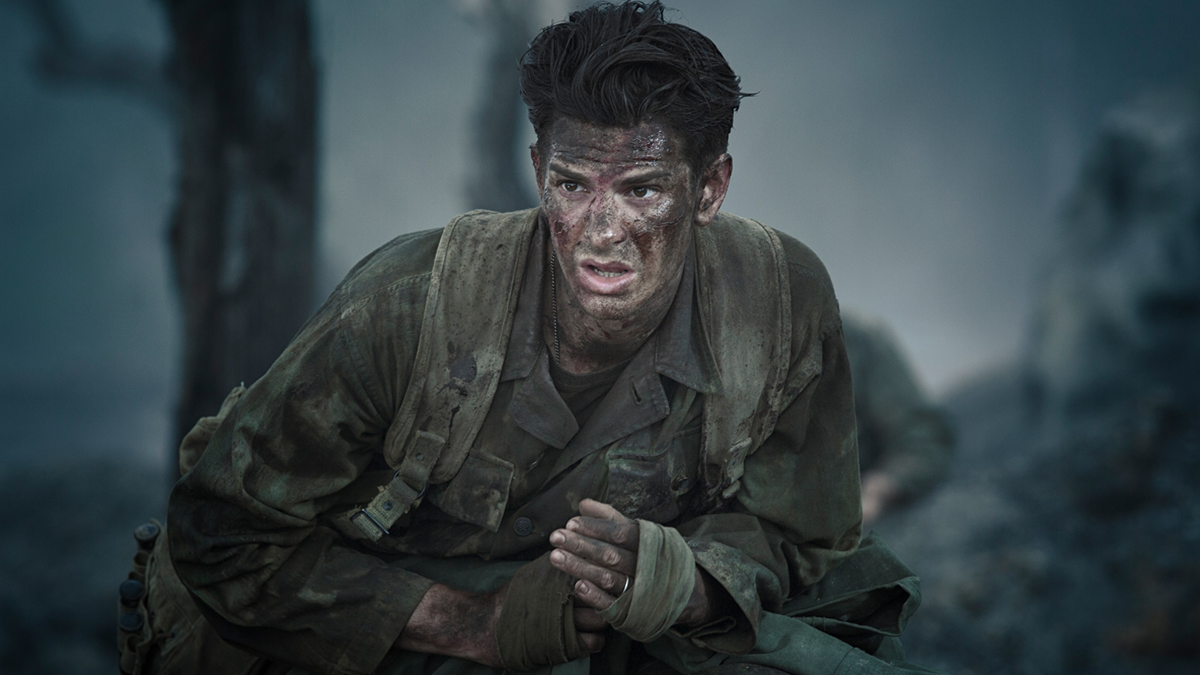 I admit to being more than a little intrigued when I heard of Hacksaw Ridge. It’s a story I knew nothing about, but was deliberate in not learning more. I wanted to go into the film as fresh as possible, choosing not to research the real life subject, Desmond Doss. To add to my excitement, it’s a war film that we don’t see much of these days, and directed by Mel Gibson. He knows a thing or two about delivering a good war flick. For those unfamiliar, Desmond Doss joined the army with zero intentions of ever taking a life. He saved several lives without firing a single bullet. An act that eventually earned him the Medal of Honor. Indeed, this is a story that needed to be told.

We begin with a young Desmond Doss playing with his brother. Their father, Tom Doss (Hugo Weaving) is retired from the army and clearly suffering from old war memories and PTSD. He also drinks a lot. One day as Desmond and his brother are fooling around in their front yard, Desmond nearly kills his brother and feels immediate guilt. We see him stumble upon a picture in the house where he sees the commandment “Thou shall not kill”, this added to words from his mother plant that seed in Desmond’s mind. We then flash forward to Desmond in his later years, not played by Andrew Garfield. He still carries around that mentality. One day there’s an accident and Desmond takes his friend to the hospital and is informed by a Doctor that he likely saved his friend’s life. Desmond donates blood and begins to fall for a nurse at the hospital. They start dating and eventually they’re to marry. Desmond decides to join the army, despite his father’s reservations about it. We then follow Desmond’s journey as he meets other soldiers and goes through his training. Vince Vaughn does nice work as the drill sergeant and there are plenty of amusing moments with the follow soldiers as well. It soon becomes clear that Desmond won’t fire a weapon and refuses to ever take a life. How can he fight a war without ever firing a single shot? Well the film is good at not making this decision too easy for Desmond. We see the long tribulations of this choice, but eventually he’s allowed to go forward as a conscientious objector. It takes Hacksaw a good hour or so to actually get to the battle stuff, but that’s more than OK. Everything leading up to that is finely paced and carefully constructed. Nothing here feels rushed or forced. It makes a strong case for why Desmond feels the way he does about not taking a life.

Some of the battle scenes indeed get a little violent, but I anticipated that going into the film, and was more than OK with it. Your mileage may vary, but this is a war film after all. I enjoyed a lot about Hacksaw and really can’t find much of anything to fault about it. The acting, especially from Andrew Garfield is top notch. He makes us really care and emphasize with Desmond. It’s an authentic and nicely understated performance that makes it hard to picture anyone else in the role. I also appreciated that it never gets too heavy with its message. Desmond prays a lot and we hear some of the prayers over the film, but it never beats us over the head with it. Instead, this is simply a character who stands behind his beliefs and I liked that element. Even if we agree or not with his decision, we can at least appreciate why he feels that way. Some of the battle scenes do get a bit long, but that’s a minor nitpick in an otherwise solid flick.

We get a virtually flawless transfer as right off the bat, things are presented strongly. From the now classic vehicles to the clothing and background shots, things look smooth. The transfer is AVC encoded with a 2.39:1 ratio. As the battle approaches near the end of the film, there’s quite a bit of blood splatter. It’s all delivered with sharp contrast. There’s nothing to fault with this transfer. It serves the film nicely.

The Dolby Atmos track is also strong. The vocals are clear with no issue, but it’s the last hour that really cranks things up. We really feels surrounded in the mayhem as bullets fly left and right. There’s a wide range to the track that only enhances the experience. All in all, this is a great track and accompanies the strong visuals nicely as well.

With a strong lead performance from Andrew Garfield and a story worth telling, Hacksaw Ridge is one of the better films of 2016. It’s well worth checking out and great to see Mel Gibson direct a worthy film. There’s a sweetness to the lead character and the film makes his case for not carrying a weapon a strong one. The Blu-Ray delivers great A/V quality along with a nice Documentary to accompany it. Strongly Recommended.