Guardians of the Galaxy (Blu-ray) 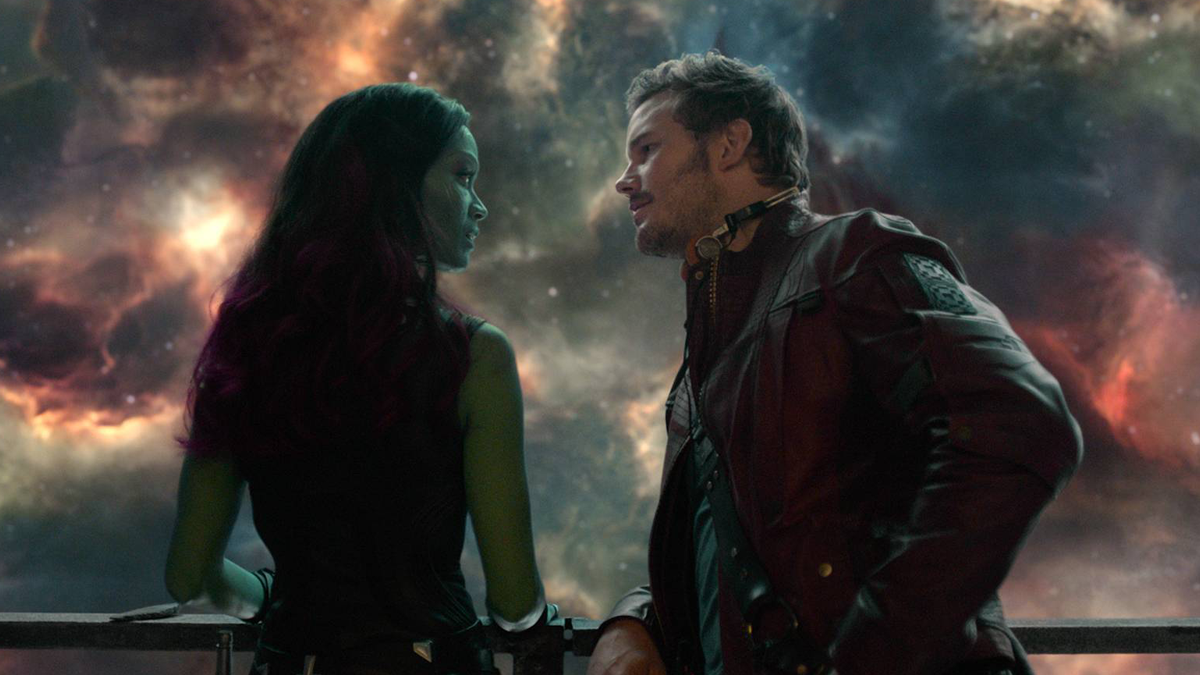 Hey kids, have you heard about the Marvel Universe? It’s expanding!  As someone who read comics as a kid, I didn’t think that some of these heroes would be the main focus of feature-length films when I was 40 years old. Turns out you can add that to the list of things I was wrong about. In case you’ve been hiding in a cave for the last decade or so, you’ll know that just about every major (and minor) Marvel superhero has appeared in a film. And with the success of other franchises like The Avengers (and all of their team members), X-Men and Spider-Man the bigwigs at Marvel are reaching further into their pockets to give us some “not so common” superheroes. Ever heard of Guardians of the Galaxy? No. Don’t worry, not a lot of others have either. I’m willing to bet that’s a thing of the past now. If you’re a bit tired of costumed superheroes fighting Norse Gods or red skulls, then take a look at Star-Lord and his band of merry men (and women). Want a machine gun wielding, genetically engineered raccoon? How about a tree that has a three word catch phrase?  Then, my friends, Guardians of the Galaxy is right up your alley. Let us begin.

Peter Quill (Chris Pratt) was born on Earth, but after his mother passed away, he was abducted by an alien spacecraft. We don’t know why, but flash forward 25 years and Peter has become somewhat of an outlaw. And not a very good one at that. He’s been tasked to find a orb and, unbeknownst to him, it’s an item of extreme power. Quill’s boss, for all intents and purposes, Yondu (Michael Rooker), then places a bounty on his head and Peter only narrowly manages to escape. T’o further complicate matters, Ronan (Lee Pace) also wants the orb so that he can wield its power and will allow him to defeat the ultimate badass, Thanos. As if that weren’t enough, two bounty hunters are after Peter and the orb, Rocket (voiced by Bradley Cooper) and Groot (voiced by Vin Diesel), but once a new price has been set, they form an unlikely alliance with Peter. Peter’s also managed to pick up Gamora (Zoe Saldana) who just so happens to be Thanos’ daughter. How’s that for a weird, vicious circle? Of course, things never go as planned and Peter and his entourage have to duke it out with nearly everyone in the galaxy. If they don’t kill one another first.

Guardians of the Galaxy epitomizes the science-fiction/action film like no other. You don’t have to be familiar with the characters and their roots in the comics (though it helps) to enjoy the fun on the screen. Everyone delivers here and does it well. If Rocket’s antics aren’t your cup of tea, then you can gaze into Groot’s mysterious eyes or laugh at Quill, who is bold enough to refer to himself as Star-Lord, a moniker that no one other than himself, has heard of. This was actually a good move by Marvel as audiences are still flocking to the theaters to see The Avengers, but this provides a good segue for some of the lesser-known titles that are slated to come. It literally paid off as the film was the #1 movie of the summer raking in over $300 million at the domestic box office. And Chris Pratt is now a bona fide movie star, accept it. There’s really no way to dislike the movie, it’s got a groovy soundtrack, good performances all around and is entertaining from opening shot to closing. I mean, really, what’s not to like? Highly recommended.

This was one of, count ’em, four Marvel movies that came out in 2014 (Captain America: The Winter Soldier, X-Men: Days of Future Past and The Amazing Spider-Man 2 are the others) so to say that the bar was set high is an understatement. Truthfully, there’s nothing to complain about. The 2.40:1 AVC HD image is perfect in every way. Detail is razor sharp, color and saturation are spot on (or as “spot on” as a talking raccoon and a living tree can be). Flesh tones, well, there are only a hand full of human “flesh tones”, seem warm and natural. Other characters sport green and blue skin tones, and I suppose we’ll just have to assume that Gamora and Rondu look like their respective races. There is so much detail in the film it’s sick – the beauty of space, nebulas everywhere and even the little beads of light that extrude from Groot’s…roots (?) look spectacular. Suffice it to say that Guardians of the Galaxy looks as good as anything I’ve seen yet.

Oh come on, what would you expect? If the super sounds of the 70’s don’t blow you away then odds are that anything and everything else will. There’s really nothing to complain about here. Vocals are rich and pure, Groot’s one line (regardless of his tone) resonates, and Bradley Cooper’s Rocket Raccoon sizzles like that of  New York cabbie. Yes, a New York cabbie. There are enough action sequences to make use of each and every speaker you’ve got and while the front stage handle’s them with the greatest of ease, it’s really the surrounds that make it that much better. Of course, the LFE have a lot of time to flex their muscle as well. It’s not often that a character’s voice activates the sub, but when Thanos speaks – you listen.  Perfect in every way.

The movie comes in a two disc Blu-ray version as well as a 3D version, though the supplements on both are identical.