I will admit that one field I have zero interest in is the medical field. I’ve always had a weak stomach, and will get grossed out fairly easy. Needless to say that treating people who aren’t well isn’t a career made out for me. And that’s fine. I have great respect for doctors and surgeons alike, but different strokes for different folks. Still, I had never seen Gross Anatomy before, and figured I could kill two birds with one stone and watch and review it at the same time. Let’s face it: we really don’t get a lot of films like these anymore. While he might not be a household name, Matthew Modine has no shortage of credits to his name. This film seems well suited for him as he possesses the easygoing nature of him character with ease. While I don’t feel the film is some late 80’s classic, it tells a sweet and honest story about students just trying to make it in the medical field as they move toward their career.

Joe Slovak (Modine) is a bright first-year med student that isn’t one to play by the rules and conform. He isn’t a troublemaker, mind you, but he is something of a jokester. He enrolls in Gross Anatomy, the toughest course in medical school. His new professor, Dr. Rachel Woodruff (Christine Lahti) wants nothing to do with his rebellious attitude. She questions if he really has what it takes to be a doctor. Joe is partnered with a few other students and we follow their journey over the course of the film as they grow closer and try to help each other. This proves helpful as some of them get a bit discouraged before long. Joe also begins to fall for his partner Laurie (Daphne Zuniga), who has more interest in her education than she does with romance.

I won’t say Gross Anatomy isn’t predictable, with a few surprises, but I was more forgiving of this film, because it has a sincerity that is missing from a lot of films of this sort. In short: it has its heart in the right place. Thinking back over it, the plot really is straightforward, but that’s ok as we are simply looking in on their lives. The cast all create believable and likable characters, and I cared about the outcome. If you haven’t seen it, check it out.

When you watch as many movies as I do, you begin to have certain expectations, whether good or bad. I probably shouldn’t say bad, but I could pretty much predict my thoughts on this transfer before I even put the disc in. Despite some early grain and a print scratch or two, this transfer mostly satisfies. By no means is it something that will blow you away, but it presents the film in a great way. The opening moments showed some grain and there was a noticeable flaw in the print about midway through, but otherwise things look clean, with no other serious issues detected. The image is AVC encoded with a 1.85:1 ratio.

We get a straightforward DTS HD track that came across as I expected. Vocals had the crispness I like and there’s some music on occasion that kicks things up a bit. At no time did the sound field blow me away, but I didn’t expect it to with this film. It presents the film as we should expect.

I enjoyed Gross Anatomy despite the plot being a bit predictable. I didn’t mind, because the film has its heart in the right place, and moves along nicely. It’s also the type of film that we don’t see much today when remakes and superhero films flood the market. Recommended. 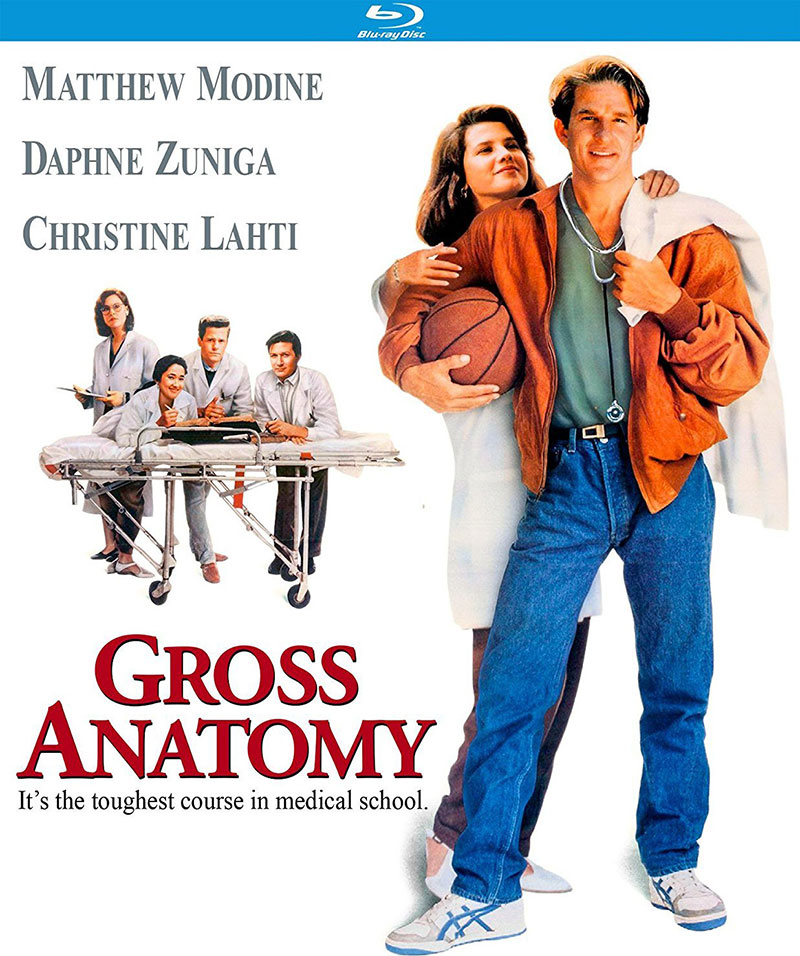