I’m one of those people that can only hear how good (or bad) a movie is so many times. When Gravity hit theaters last Fall, it was instantly critically-acclaimed and why not? It had all the right elements: George Clooney and Sandra Bullock – two Academy Award winning actors, and Director Alfonso Cuarón. Cuarón is probably best-known for his film, Children of Men and Harry Potter and the Prisoner of Azkaban. However with award season in full swing, we can see that the film was no fluke with 10 Academy Award nominations and wins across the board at other award shows.  Like another film I recently watched, All is Lost, the cast of characters isn’t that robust. In fact it’s just two: George Clooney and Sandra Bullock. You don’t need an ensemble to have a good movie if you do it right. The day has finally arrived and I get to see what the fuss is all about.  So…how was it?

Dr. Ryan Stone (Sandra Bullock) is a medical engineer who’s a part of a mission to repair a piece of equipment in space. Mission commander Matt Kowalski (George Clooney) is the grizzled vet who regales her and those on the ground with his stories. But when a Russian satellite is destroyed, the debris is hewing their way.  Not good. The debris takes out their craft, leaving Ryan and Matt to head to the International Space Station. If they can get there, they can reach the Chinese space station that will allow them to get back to Earth.  We follow them in a close approximation of real time as they try to avoid the debris, save what little oxygen they have and literally try to see another day.

I didn’t divulge too many things about the plot for a couple of reasons: I don’t want to ruin it for anyone and it’s not that complicated. While watching Gravity, I felt calm and relaxed. I don’t know why. Maybe it was the soundtrack that kept me at ease.  I didn’t feel like I was watching a movie, to be honest – it’s like watching a symphony in space if you will.  Clooney says it best in one of the features that this is Sandy’s movie. It is. He’s there, but he’s just a recognizable face.  We can see the trials and tribulations of being in space and though it’s calm and peaceful, it can be just as dangerous as walking on a minefield.  Cuarón’s writing and direction are beyond reproach and it’s made me want to go back and revisit some of his earlier films.  For me, Gravity is the best movie of 2013 with some special effects that are so realistic – you’ll forget you’re actually watching a movie.  Highly recommended.

The look of Gravity is one that’s constantly changing and though the backdrop for the majority of the film is outer space, the landscape in the background is ever-changing. The 2.40:1 AVC HD image is one that’s perfect.  The deep blacks of space are contrasted with the white of the suits, the yellow of the sun and the detail of the Earth in the background. Detail is amazing, we can see each and every bit of space debris, the forehead wrinkles on Clooney’s face and the little lights on the instrument panel.  Seeing as how this movie is so dark in places, it would be easy for there to be some crush or banding. There is none. Given that the majority of the film was processed in the digital realm, it’s one of the most beautiful and excellent examples of a live action Blu-ray.  Stunning.

The previous Blu-ray contained a very rich and robust DTS HD Master Audio track. For this Diamond Luxe edition, a new Dolby Atmos version has been included. I, however, do not have a Dolby Atmos setup, so I’ll instead point you to a very comprehensive review found here.

As is the case with all Dolby Atmos soundtracks, if you’re not physically equipped, then it defaults to a TrueHD mix. Having said that, I could detect no discernible difference between that and the previous DTS HD Master Audio track, so my comments remain the same regarding the mix.  This is perhaps one of the most interesting films I’ve watched regarding sound in that it’s so unlike any other traditional other film. Each channel is used to the utmost degree, we can hear dialogue clearly coming out of the right rear surround and then the front left channel. It creates a dizzying effect that somewhat mimics what it must be like free-floating in space. And that was the intent.  From the smallest chirps to the loudest explosions in the film, the DTS HD Master Audio soundtrack is an exercise in perfection. Couple that with Steven Price’s remarkable, natural and organic score and this is one soundtrack that left a remarkable impression.

Gravity wasn’t exactly a bare bones release when it first came out and those same supplements have been ported over to this Diamond Luxe edition. Admittedly, this is the first of Warner’s Diamond Luxe editions that I’ve reviewed and this seems to be the best of the bunch to date. In addition to the pre-existing features, we get a new Dolby Atmos sound mix (which was covered above) as well as some new featurettes and a “Silent Space” version which we’ll cover below.[alert type=”alert” title=”Warning”] Some of the features below might contain possible spoilers for the film. Proceed at your own risk.[/alert]

The Hues of Space – This segment focuses on the lighting, how it was visualized as light would appear in space, how most of the film was pre-lit in the computer and some of the various challenges that lighting posed.

Space Tech – The filmmakers discuss how this film wasn’t trying to be a “science fiction” movie in the literal sense and how the technology involved was that of modern day. We learn of the process that they went through to do the film, the opposite of most films in that they started in the computer and then radiated outward towards the more physical aspects.

Sandra and George: A Pair in Space – As Clooney states “This is Sandy’s movie…” we see the energy and life that Clooney injected to the cast and crew during his stint on the set and the gaping hole that was gone when he leaves.

Final Animation – As the film nears its completion, we see some of the final aspects of getting everything just right. Sandra Bullock does some of the final bits of acting to comply with what was already set in the pre-visualization as the pieces finally start to come together.

Complete Silence – The catch phrase for the movie Alien was “In space no one can hear you scream.” And that’s true. So the literal sound is explored here, what components needed to be where and how they could best convey the sound (and lack thereof) while still maintaining the integrity of the film. This is explored a bit more below in “The Sound of Action in Space.”

Fire in the International Space Station – For this pivotal scene, we see how the effect was created, how it was organically motivated and rendered and finally the final product in the film.

Dr. Stone’s Rebirth – Seeing Sandra Bullock sitting on a bicycle seat with one leg in a brace didn’t look like fun, but we see the shot, the organic nature of it and its representation of life itself. Truly seeing how they made this key sequence is one of the more interesting in the movie.

The Sound of Action in Space – As we saw in the “Complete Silence” sequence, the score and action cues make the film and as composer Steven Price explains to us, the sound design for the film was very different in that it’s a total immersion. Different channels and effects make for a very dizzying and interesting viewing and we even see the rather interesting instruments used (hint: wine glasses) used to make some of the more organic sounds.

Splashdown – We get a look at some of the scale models used for the final scene, the effects used and how the underwater sequence came to fruition.

There are very few Blu-rays that deserve to be purchased twice, but this might just be an exception to the rule. Warner has taken their previous Blu-ray version and given it enough supplements to warrant another dip. Certainly if you don’t already own this on Blu-ray then this is the version to get. As for the film itself, Gravity was just as gripping and tense as it was the first time I saw it. I loved it the second time – perhaps even more. This gets my highest recommendation. 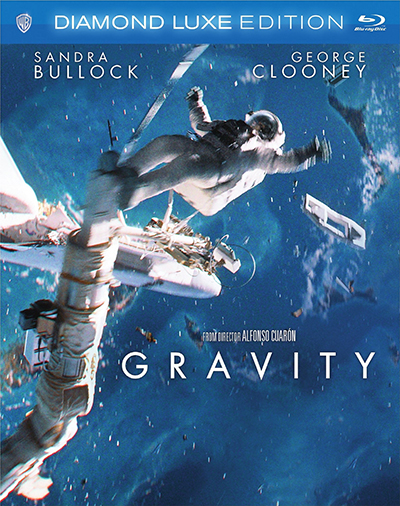