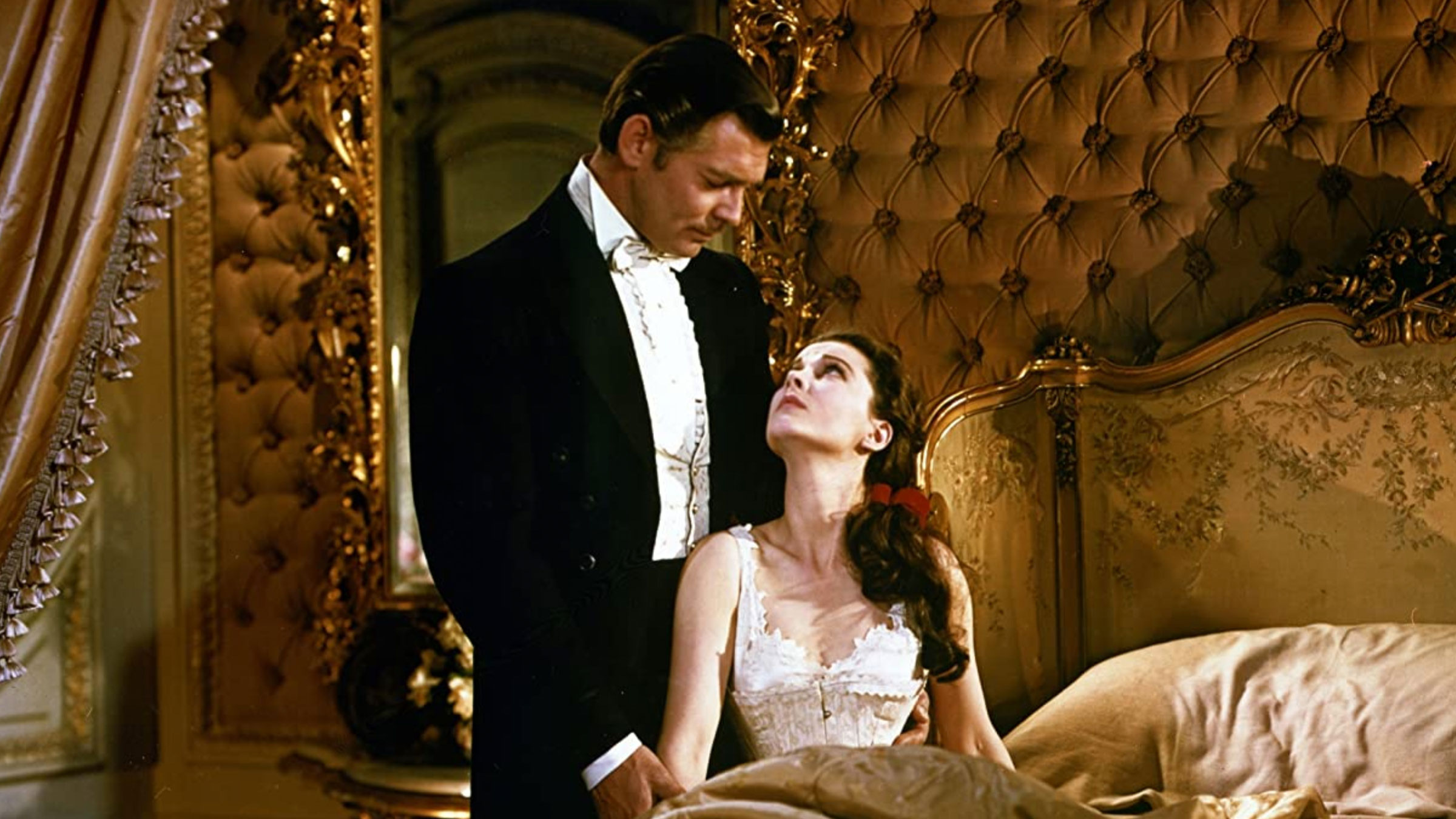 MGM’s monumental film about the fall of the Old South is no less breathtaking today as it was upon its initial release back in 1939. That it stands the test of time this incredibly is a testimony to virtually every aspect of its inception, execution, and near-impeccable production value. For all the fruitless attempts at recreating a film in the vein of the long lost Hollywood epic, “Gone With The Wind” stands today as a film as cherished as any, arguably outreaching in classic status films the likes of “Ben-Hur” and that other indispensable Fleming cultural staple of the same year, “The Wizard Of Oz”. So just what is it that makes this such an enduring piece of cinema after nearly seven decades? There’s no simple answer to that question, but this is only the case because there are far too many reasons to list here in three brief paragraphs. The short and easy explanation is that the film simply breathes with life. Colors, sounds, and overall atmosphere simply transcend the screen. Performances are top notch. Even the score is a legendary achievement. There is not a false beat or awkward transition to be found in the nearly four hour film.

To paraphrase Leonard Maltin’s video guide, “If not the greatest film ever made, [“Gone With The Wind” is] certainly one of the greatest examples of storytelling ever filmed”. I contend to this day that, while Scarlet may get her strength from Tara, this movie has always gained its through sheer craft of storytelling. Though not always about a subject that lends itself to edge-of-your-seat excitement, this is one of the most well-paced films ever made. Much must be said for a film of this vintage that holds up so well today, especially when said film is really little more than a bloated soap opera set in historic times. It takes quite a steady hand to put together a piece like this that consistently holds fast to its audience through literally generations of drama, and yet Victor Fleming did just that. The irony is that, as it seems to be with all films destined for future greatness, the movie was riddled with production problems and almost didn’t get made at all, and Fleming wasn’t even the film’s original director. But then, that’s a story for you to learn yourself through this DVD release’s positively grand extra features.

“Gone With The Wind” has had its share of releases. Back in the days of VHS tapes, one could pick up the film for a cool hundred bucks if you were willing to fork over the dough. And for that, you got a box with two tapes inside that housed the film – and nothing else. Later on, if you had the finances to support your obsession, you could pick up the film in a special edition CAV laserdisc offering that split the film up every half hour or so (ouch). There was even an ill-conceived attempt at releasing a widescreen version of “Gone With The Wind” on the obsolete twelve-inch platters. The problem is, the film wasn’t shot for widescreen! My, how times have changed. Now you can watch the film on a shiny, five-inch disc with one intermission, dramatically improved visual and audio quality, and loads of worthwhile supplements. And all of this at a substantially reduced price. The first release of the film left a lot to be desired as it contained virtually none of the extras fans had been clamoring for for years. Fortunately, however, the powers at be at MGM have definitively retired the earlier disc with this incredible four-disc release commemorating the film’s 65th anniversary.

Five years ago we were treated to a 70th Anniversary Edition (and I’m sure that in five years we’ll be presented with an 80th Anniversary Edition) that looked stunning. Warner pulled out all the stops for that version. It sported a new 8K VC-1 encoded transfer and is, by far, the best the film has ever looked. Looking at this version, the two are identical. I guess if it ain’t broke (anymore, that is) then why fix it?  Having said that, Gone with the Wind has never looked better. The 1.37:1 image won’t fill your screen like today’s films, but colors are rich and robust, blacks are dark and deep and contrast gives the film a very 3D like look and feel. Did I say that this is the best the film has ever looked? Because it is. Even considering the gargantuan running time of the movie (232 minutes), there’s still ample room on the disc and it’s never challenged. I could go on and on, but for a film that’s now 7 decades old – this looks amazing.

Again, the previously-released 70th Anniversary Edition contained a very robust Dolby TrueHD 7.1 mix that’s present here. Is there any other way to hear “Frankly my dear, I don’t give a damn.” than in uncompressed sound? No. No there isn’t. Everything about Gone with the Wind is epic and this soundtrack is no exception.  The fire in Atlanta, the score, the effects – all sound amazing. Now don’t go and think that this will in any way, shape or form compare with today’s modern soundtracks as it won’t, but given the age of the film and the elements available, well, you get the idea. Honestly I could go on and on, but this soundtrack has been reviewed by many five years ago and I was amazed at how good it sounds.

Ok, now this is where it gets fun!  Warner obviously had to provide some incentive for folks to once again pony up their hard-earned cash, so there are a few new supplements that have been added for this release. We’ve also lost a couple of things. There’s new cover art as well if that matters to anyone. Since the 70th Anniversary Edition wasn’t covered here, we’re going to dig into all the supplements. Fasten your seat belts, it’s going to be a….wait, wrong movie. Essentially what we’re lacking here is the soundtrack CD which has been replaced by a new Blu-ray with the newer supplements. It’s easier (for me, anyway) to just list what each disc has, so we’ll do it like that. Let’s get started.

Disc One (Blu-ray)* – This is the exact same disc that appeared in the 70th Anniversary Blu-ray release and nothing new has been included.

Disc Two (Blu-ray)* – This is the exact same disc that appeared in the 70th Anniversary Blu-ray release and nothing new has been included.

Disc Three (Blu-ray)* – This is the exclusive to the 75th Anniversary Blu-ray set.

Disc Four (DVD)* – This is the exact same disc that appeared in the 70th Anniversary Blu-ray release and nothing new has been included.

Though not included with the set, Warner also sent along a book: Ruth’s Journey: The Authorized Novel of Mammy from Gone with the Wind. I didn’t read it, but I guess it’s a good companion piece to the film. And if you’ve braved all of these supplements, I’m willing to bet that a 370 page book is child’s play.