And So It Goes (Blu-ray)

If you were exhausted from the endless sequels and superhero movies this past summer then And So It Goes just might be the change of pace you need. I love a good summer blockbuster as much as the next guy, but every now and then, it’s nice to get a quieter diversion for a change. Oren Little (Michael Douglas) isn’t the kindest of souls. He is a Realtor who is perfectly content with his simple life. Things becomes complicated, however, when his son shows up and informs him he is about to go to prison. His son has a daughter, and he declares Oren take care of her while he’s away. Obviously, this isn’t Oren’s preferred arrangement, but he takes her in. After all, it is his granddaughter.  Oren has put his house on the market; trying to move on after his wife has past. He lives near the ocean in small condo type of home where he doesn’t treat the other tenants very well. Diane Keaton plays Leah. She isn’t too fond of Oren at first, but eventually, she starts to look after his granddaughter and take care of her when Oren has work to do. There’s not much here in terms of plot, but the character of Oren is the most interesting. Douglas and Keaton play a large part in the film’s success.

The film may not reinvent the wheel, but I still enjoyed it throughout its brief running time. Sure, it’s predictable, but it’s the kind of film that they don’t make a lot of anymore. I also cared about the characters here. The destination might be obvious, but it was a fun journey getting there. There are similarities to As Good as it Gets among other films with not the most likable protagonists. I was even reminded of the more recent St. Vincent. Sure, Oren will eventually come around and become a changed person, but that’s OK. His arc is fun to watch during the film. Rob Reiner directed the film, and it might not be one of his best films, but it’s a worthy entry and is well worth seeing. It was a pleasant surprise last summer and a good change of pace from the bigger budgeted films that invaded the market. Check it out.

Presented in a 2.40:1 AVC HD image, And So It Goes looks just as we think it would – good. I’m often hard-pressed to find new and exciting ways to try and describe a new to Blu-ray film, and that’s the case here. It’s a Rob Reiner movie, so the set design is colorful, cheery – all the outfits are color coordinated…just as you’d expect for an adult comedy. While there’s nothing really “wrong” with the way this looks, it falls just short of perfection with a few scenes on the softer side. Nothing distracting, of course, but detail is impressive (when did Michael Douglas officially bemuse “old”, by the way?) and it sets the stage for a good-looking film.

The sound stage has a few moments of glory, but by and large this is a pretty standard mix. Granted, the DTS HD Master Audio track has a few chances to flex its muscle (when Keaton sings, for instance) and surrounds chime in a few times for some extra pizazz, but this is a pretty front-heavy mix. Vocals are strong and crisp, Douglas’ voice resonates through the center channel with the utmost authority.  It’s a pretty standard, yet forgettable, offering. Again, no complaints here. 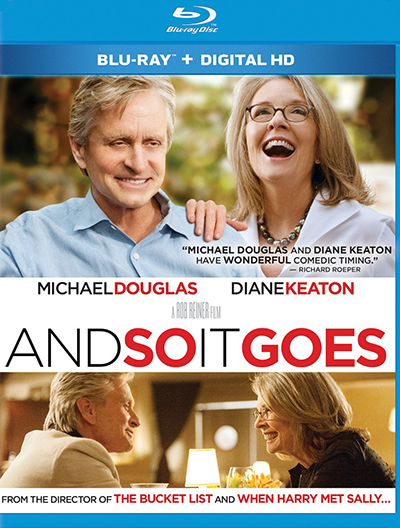