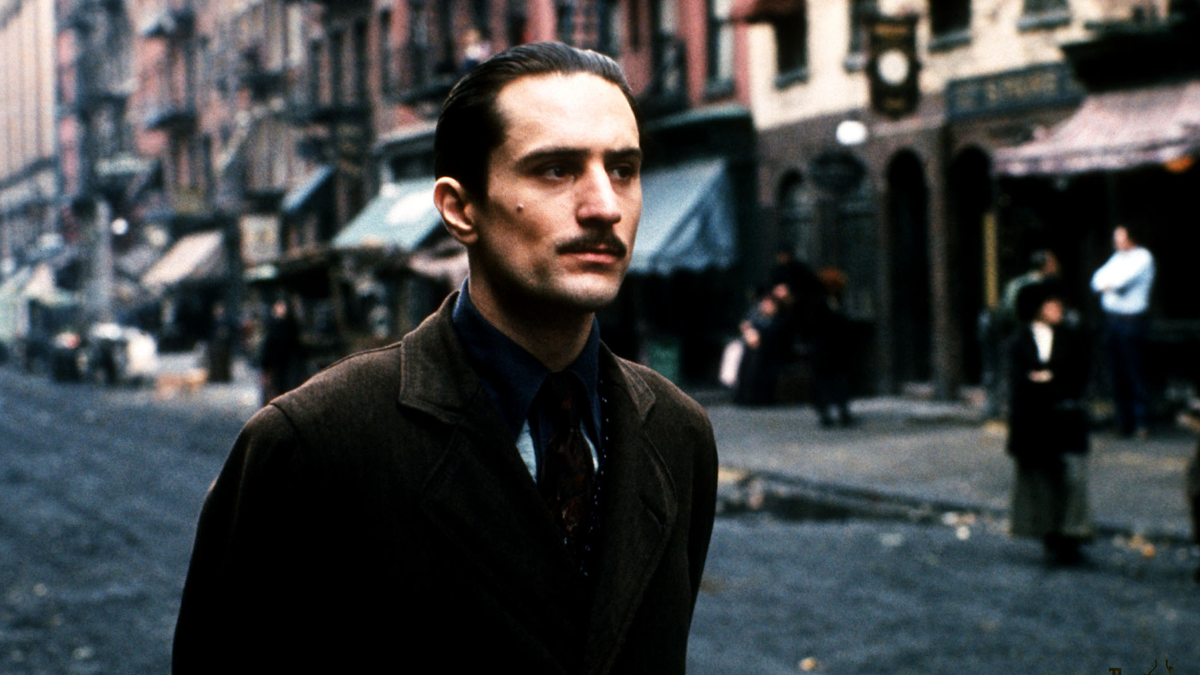 It’s quite obvious right from the start that Part II is a more personal film for Coppola. It’s much more an art house picture than the first installment, and yet it somehow retains just enough of the successful ingredients of the audience-pleasing first to once again attract mainstream appreciation while satiating the appetites of those who craved a more thoughtful, cerebral second entry in the series. The film is ingeniously inter-cut between a turn-of-the-century young Don Vito (pursued my a local chieftain in Sicily and eventually ascending to power in New York City) and the increasingly splintered psyche of a 1950’s Michael, now ascending to ever-greater levels of power, paranoia and corruption. Again, there are subplots and double-crosses enough here to fill up several more films, but it’s the performances that sell the production. Robert DeNiro somehow channels the feel and weighty presence of Marlon Brando, even though he bears little resemblance to the actual actor. It’s inspired casting that won DeNiro a well-deserved Oscar. Pacino is once again marvelous as Michael Corleone and plays him this time as someone so bent on obtaining and maintaining power and control that he eventually gains both at the expense of his family and perhaps even his own humanity. By contrasting the two men, Coppola sets up a chilling commentary on two vastly divergent paths toward a shared goal and how one path leads to prosperity and the other self-destruction.

These are lofty themes to be sure, but the film is still easily accessible to those who choose to see it simply as a continuation of the Corleone family’s story. For me, it’s the film’s apparent ease with working on those two very different levels that has made it the enduring classic that it is today. The second entry also takes a perfectly self-contained film in Part I and expands and enriches it by effectively presenting not only Act III, but Act I as well, making it perhaps the first “prequel” ever made. I can’t think of a single other movie that manages to both logically advance the story of the first film and also enrich the original with a back story that gives it more meaning than before. The second film, in effect, works effortlessly to bookend the first on both sides. The two together are an intimate, provocative, and ultimately devastating portrait of the Corleone family’s rise and fall.

This description has been taken from our review of The Godfather: The Coppola Restoration Blu-ray. This 45th Anniversary disc features the same technical specifications as those included on those discs.

As anyone reading this is no doubt aware, The Godfather: Part II has never looked very good on home video. In fact, that’s a pretty drastic understatement. Virtually all of the previous releases of the films, be it on the various laserdisc versions back in the 1990’s, have been extremely disappointing, ugly affairs that showed off pretty much every video issue imaginable. They were overly dark (even for inherently dark films), sported detail that was fair at best, contained a distracting amount of artifacts, showcased variant black-level issues, and even threw in a little edge-enhancement for good measure. Though these films will likely never look as though they were filmed yesterday (short of corrupting the source with excessive amounts of DNR and unwanted digital manipulation), this new AVC presentation is nonetheless quite revelatory in its own right. Those used to the dirty, dingy quality these films have always displayed at home will undoubtedly find the most to appreciate here. Artifacts have been nearly (if not completely) eliminated this time around, and the contrast has been given a boost for a much “warmer” feel in general.

Fine detail is vastly improved over any previous version of the films, and black levels are thankfully deep and dark, with not a single waver into gray or blue to be found, even in the trilogy’s numerous, previously problematic fades. The edge enhancement that plagued the previous DVD has been fully eradicated here. These improvements, while perhaps small on a point-by-point level, have a cumulative effect of giving the entire saga a fresher, cleaner, and more refined look and feel. This Blu-ray release finally does that experience justice in a home environment. While none of the films sparkle with that HD clarity that comes from newer features, those expecting that are quite frankly being unrealistic. These movies aren’t exactly new, and though they aren’t top-tier demo-worthy presentations, kudos must go out to Zoetrope Studios and Robert Harris for staying true to the spirit of what a good restoration is supposed to be without resorting to the evils of DNR. Grain has been meticulously and gloriously preserved here, yielding a surprisingly film-like appearance. A side-effect of this is, of course, a softer-looking image than on some HD titles. The source materials, for all the obvious work done to them, are still not in the best condition, and some scenes do betray this fact. Take, for example, the scene in the first film in which Michael greets Kay after returning from Sicily. This scene definitely looks sub-par, but then, that’s the nature of the beast, and the new HD presentation does reveal the limitations of the material in similar moments throughout the trilogy. Conversely, the many of the scenes of the Italian countryside are much more well-defined and lifelike.

Now, admittedly, there have been some rather obvious liberties taken here with the color timing, most noticeably on The Godfather Part II. For example, the scene in which Michael testifies before the committee is now awash with sepia tones that are almost overwhelming if you’re not expecting the change from previous home video versions which employed a more natural scheme. Also, the contrast (as I mentioned) has been pumped up substantially in several sequences which lends to a hotness in the image that was never there before. No doubt this was an artistic decision, and I will not question Coppola’s visual judgment in this review. Suffice it to say that hardcore purists may take issue and might want to give this set a rent if they think it may be a deal-breaker. For me, it was not. In my opinion, the numerous benefits of the new restoration far outweigh any questionable, revisionist color timing decisions. This is unarguably the finest presentation of the Godfather films ever released and, barring a miracle, I can’t imagine this series looking any better than it does in this collection.

As impressive as the video is the audio honestly impressed me even more. This isn’t an “impressive-sounding” mix per se, but again, those used to the previous releases will certainly notice a definite difference in overall fidelity, clarity and ambiance in these new TrueHD soundtracks. The gunfire is now just as jolting and loud as it should be, with directionality and ricochet effects that cascade all over the sound field. No doubt, this is how the scene was intended to sound. It’s as surprising an audio experience as the scene is from a storytelling standpoint. But then, that’s what I find so wonderful about the mix on all three films: they compliment the onscreen action impeccably. The quieter scenes, though mostly dialog-driven, have a fullness to them that simply wasn’t there before, and I never got the impression (as I always have before) that the sound was either tinny or limited in dynamic range.

Words and sound effects are equally intelligible, and there’s an air of atmosphere that now fills the proceedings through the employment of lossless audio that is more a visceral perception than a definite, technical aspect of the sound itself. All in all, this is an absolutely top-notch effort (especially for the two films that originated with mere mono mixes). Now, again, these movies will never sound like the best demo discs out there, and they’re not meant to. But as with the video, the audio presentations here are nothing if not respectful of the respective films they support. The best accolade I can bestow upon the new audio is that they never sound forced or gimmicky in the slightest bit. It’s instead as if the saga was always meant to sound this way. Even the purists should find something to admire in the faithfulness afforded here to the original source tracks. Having owned all three films on VHS, laserdisc, DVD, and now Blu-ray, I can say with assuredness that you have never heard this trilogy sound this clean and natural. Excellent.

Like The Godfather, this is a single disc re-release that loses most of the supplements found in the Coppola Restoration disc. If you can handle that, this is the version to get as it features the same great visuals and audio and we keep the Coppola commentary track. If supplements are your thing, this might not be the one to pick up.