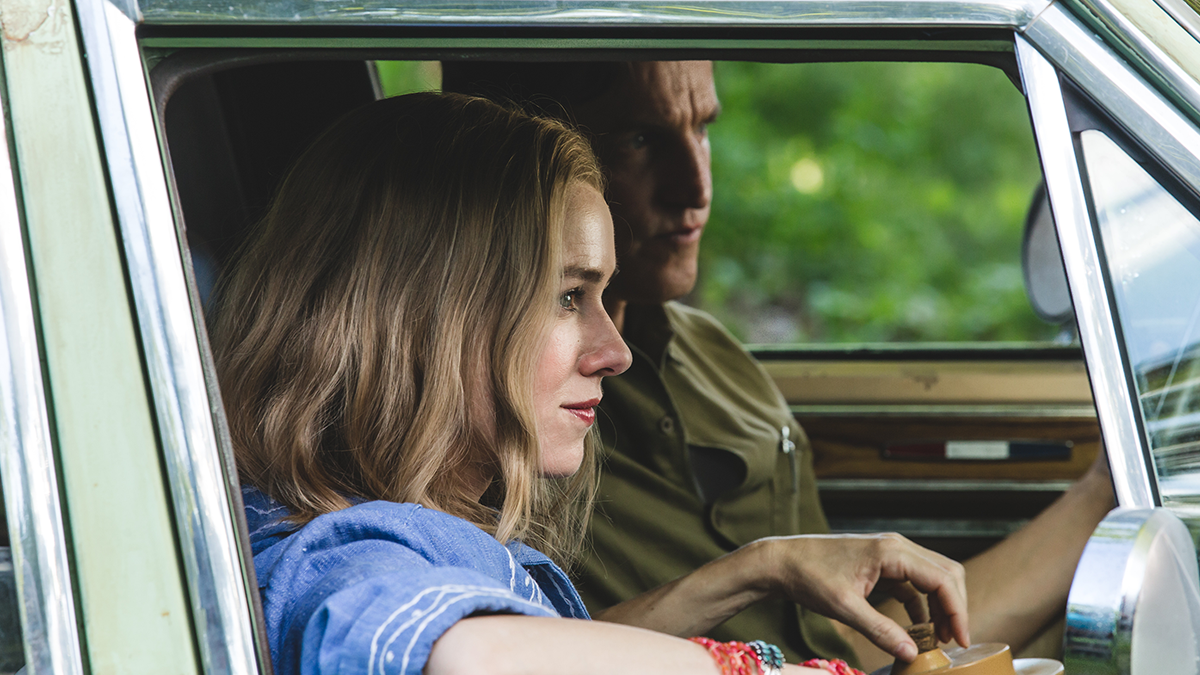 Maybe I don’t pay attention to what’s happening in the theaters these days.  Or maybe the rise of DVD and Blu-ray’s have made it that more films are seeing the light of day without a major release? In any case, I can’t say as I remember hearing or seeing anything about The Glass Castle until it showed up from Lionsgate.  Certainly, the cast is top notch and I assume it must be competing for Oscar nominations as the main three actors: Brie Larson, Woody Harrelson and Naomi Watts all have the coveted “Academy Award Nominee (or winner in Larson’s case)” above their names. Ooooh, it must be a drama! Nevertheless, even though I’m guilty of judging a book by its cover (actually my wife has read the book by Jeanette Walls), so let’s dive in.

The film follows Jeanette (Brie Larson) who’s just become engaged to David (Max Greenfield), someone who works in the wonderful world of finance. Told in flashback form, we see Jeanette’s childhood where she and her two sisters live somewhat of a nomadic existence. Her father, Rex (Woody Harrelson), doesn’t seem to trust the world around him and he’s got a problem with alcohol. He’s not the typical “abusive drunk”, rather he keeps it contained and does show love and compassion for his family. Rosemary (Naomi Watts), is more of a free spirit and happily supports whatever outlandish idea that Rex has. We follow the family a they go from house to house and flash forward as to how Jeanette has escaped her rather frightening childhood.

There’s a lot at play here and it’s done well. I have to admit that I wasn’t expecting a lot when watching this film, but Harrelson and Larson really do make it work – in particular, Harrelson. And in the world of dysfunctional family films a few come to my mind: Captain Fantastic and Little Miss Sunshine. Those are a bit on the quirky side, but the message is the same regardless: it’s possible to love someone in spite of their flaws. I should know, people love me! The film might not be one you watch time and again, but the fine performances and overall message did resonate with me. I was duly impressed.

There’s not a whole lot of color in the film. Well there is, but it’s not a colorful movie – I think that’s a better way of saying it. Lionsgate brings the film to Blu-ray sporting a 2.40:1 AVC HD image that’s sharp as a tack, but looks a bit bland in the same breath. Make sense? The muted palette gives rise to a bit of grain in a few of the outdoor scenes, but it’s not distracting. Contrast is sharp, some of the visuals are truly beautiful and it really freaks me out to see Woody Harrelson in a movie where he’s got hair (and dark hair at that). Suffice it to say this looks fine and I don’t imagine anyone nitpicking it too much.

Lionsgate is throwing us a curve! Yep, it’s natural to assume that most every Blu-ray will have a standard DTS HD Master Audio track. Nope. Not this time. We get a Dolby TrueHD mix that’s got a few moments of intensity. Take that DTS! Kidding aside, it does get the job done and I’ve always preferred Dolby tracks to DTS – don’t ask me why. Vocals are strong and rich, directional effects are few and far between, but this manages to convey a real sense of desperation in a few of the earlier scenes (you’ll understand when you see the film). It’s a good effort, to be sure.

It wouldn’t surprise me to see Harrelson get an Oscar nod for his role of Rex. It’s been a while since the Academy has looked Harrelson’s way, 2009’s The Messenger and 1996’s The People vs. Larry Flynt are his only previous nominations. He’s fantastic here. The movie might prattle on a bit for some, but I found it moving and fairly inspirational. This is a rare gem of a film.