Ghosts of the Abyss (Blu-ray 3D)

This picks up where Titanic left off. This is true, but also a bit misleading. “Ghosts of the Abyss” is an IMAX movie that was shot in 3-D and has now been released on DVD in a 2-D version. But what of Titanic? It’s still there, resting in the North Atlantic where it went down over 90 years ago. Director James Cameron won 11 Oscars for his movie and hasn’t really done much since, except continue to dwell on this ship. I suppose that’s not a bad thing as researchers love his interest (i.e. money) in it and they’re constantly trying to find newer and more ways to rummage through the wreckage. Whereas “Titanic” made a leading man out of Leonardo DiCaprio and a star out of Kate Winslet, “Ghosts of the Abyss” has neither of them it it. This is a documentary and though you might recognize some of the faces in it (Bill Paxton is along for the ride, whining all the way), this is almost about as far away from the movie as you could get. “Titanic”, the number one top-grossing movie of all-time, obviously struck a chord with audiences around the world and my guess was that they were seeing if it was the love story (yes) or the interest in the ship itself (no). In any case, here’s what to expect when viewing the disc.

Bill Paxton (himself) has showed up aboard a scientific vessel for the sole purpose of being the narrator of a documentary. His long-time friend, James Cameron, is finding new and exciting ways to go through the ruins of the Titanic and wants us along for the ride. The IMAX documentary was filmed in 3-D and this has been downconverted to 2-D (Cameron believes that 3-D is where the future of movies lie, while most of us think of it as a gimmick). A giant light, called the “chandelier”, will illuminate much of the wreckage and allow two “BOTs” named Jake and Elwood to actually go inside the ship and show the crew what it finds. Now this is interesting, if you have any such interest in the ship and its history, this is for you. But if you liked hearing Celene Dion belt out “My Heart Will Go On”, then you might want to turn your attention elsewhere. This was filmed some two and a half years ago and the September 11th attacks were right in the heart of it, they’re mentioned here as well. They said it best that when something of this magnitude happens, it makes exploring a ship that sunk ninety years earlier something not too important. They just might be right. In any case, for those who love IMAX and their high-quality programs and for true buffs of the Titanic, this is more of what you’re looking for and worth a look.

The movie was originally intended for a large screen in IMAX, but it’s been sized down and even anamorpically enhanced at a 1.78:1 aspect ratio. I didn’t notice a lot of improvement from the standard DVD, save for an increase in the detail.  The material here is pretty close to pristine, as we might expect from anything involving James Cameron. While the majority of the “movie” takes place underwater, we might expect the darkness to incur some artifacting and I’m happy to report that there was none of that nasty stuff swimming around in the transfer.

The previous Dolby Digital 5.1 mix has been upgraded to DTS HD Master Audio.  It’s a bit more robust, but by and large the dialogue, for which most of the film is, is clear and very natural and though there really isn’t that much to offer in the audio department, I did detect the surrounds being used a few times. For the most part, the “action” is limited to the front three speakers and that’s about it. This isn’t like the movie in which we get a very good representation of how it might feel to be on the Titanic, rather this is a good feeling for how it would be to be look at the Titanic. In any case, don’t expect a lot but don’t prepare to be disappointed, either.

There’s nothing new In the extras department, we don’t get a whole lot but then again this is an IMAX film, so we shouldn’t expect a lot. First of all, there are two distinct cuts of the film, the one that played in theaters and the 33% longer “Extended Version”. The longer version does what we might expect, adds some new information into what we already knew. We get a little more of Bill Paxton that we’d like to see, but that’s about it. The second disc houses the rest of the supplements in some featurettes: “Reflections From the Deep”. These are six short featurettes that focus on everything from Bill Paxton’s edginess to the tragedy of 9/11. Though none are too enlightening, they’re good to have on the disc. What was more confusing was the second featurette, an interactive demo, “The MIR Experience” which tried to replicate what it was like for us to be one of the explorers. There are six cameras and you can pick which one you want to display. It was kind of neat, but loses its luster very quickly. In any case, that’s it for the supplements. The DVD version is also included as is the 3D version on an individual disc. 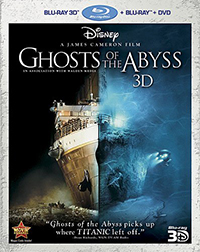