The landscape of Mars has been colonized by mankind, but that doesn’t mean all of its secrets have been discovered. A team of police agents has been dispatched to a remote mining colony there, where a dangerous criminal is be picked up, then transported back to face his charges. One of the team members is Melanie Ballard (Natasha Henstridge) and while she doesn’t know it now, she will be the sole team member to return from the mission. After some time has passed and the team starts their mission, their train arrives back at the station, but not all of them have made the trek back to the main populace. As the search crew examines the ghost train, they discover Ballard is the sole occupant and she has been handcuffed in place. What happened to Ballard and more to the point, what happened to the other members of her crew?

After a dismal run in the theaters and a scathing tour of the critical press, Ghosts of Mars has landed on home video, where it should find an audience. Of course, fans of John Carpenter will check it out, but I think anyone who enjoys action driven sci/fi and doesn’t need a complex, thought provoking premise should look into this picture. Yes, it is plot holes and never asks much of the viewers, but then again, this kind of movie shouldn’t, I don’t think. It is clear this flick was made to dazzle the eyes and provide a nice, fast ride and if you ask me, it succeeds on those fronts and that’s what counts. The pace is brisk, the characters are fun to watch, there’s tons of brutal violence & blood to be seen, plus it has Natasha Henstridge. I know she’s not the best actress out there, but I love to see her in action and as such, her presence enhances the experience for me and I’m sure, many others out there. In the end, this was a very fun movie to watch, but the violence and plot holes could turn some folks off, I think. But if you’re into brutal, action driven sci/fi with some awesome visuals, then give Ghosts of Mars a chance.

Although his career has taken a downturn over time, I still have faith in director John Carpenter, if just because he makes fun movies. I admit some of his recent works have been pretty bad, but he is reliable in some respects and he doesn’t shy away from graphic violence, which a lot of directors seem to do in the current social climate. So even if just because he uses sex and violence in nice doses, I continue to frequent Carpenter’s films as he completes them. I had low hopes for Ghosts of Mars, but as per usual, he delivers the violence and throws in some hot women, as well as a decent enough storyline. This is no thinking man’s movie by any means, but it is rough and pulls no punches, which is cool, I think. I wouldn’t call this a return to form for Carpenter, but it is a step up from some of his other efforts.

I saw the film theatrically and then on DVD, but never in HD. I must say that the transfer here is quite nice. We get an AVC encoded 2.40:1 image that’s consistently pleasing. The print was surprisingly clean and free of flaws, with good and bold colors throughout. There is a darker color palette to much of the film, but it never became hard to decipher what was happening on screen. In short, this transfer satisfies on all fronts.

Also strong is the DTS HD track that not only has the clarity I expect, but a strong and broad soundscape throughout. Vocals are fine, but when the action kicks in, that’s when the track really comes alive and brings us into this world. The track stays reasonably active and like the transfer, serves the film in a positive manner.

The supplements are the same as the previously-released Sony Blu-ray.

I’ll admit it and I don’t care, but I really enjoy Ghosts of Mars. It has a sense of humor about itself and quite frankly, is just a lot of fun. This disc is actually surprisingly good, but fans might want to seek out the supposedly superior Region-Free version from Diablo. Either way, this comes recommended. 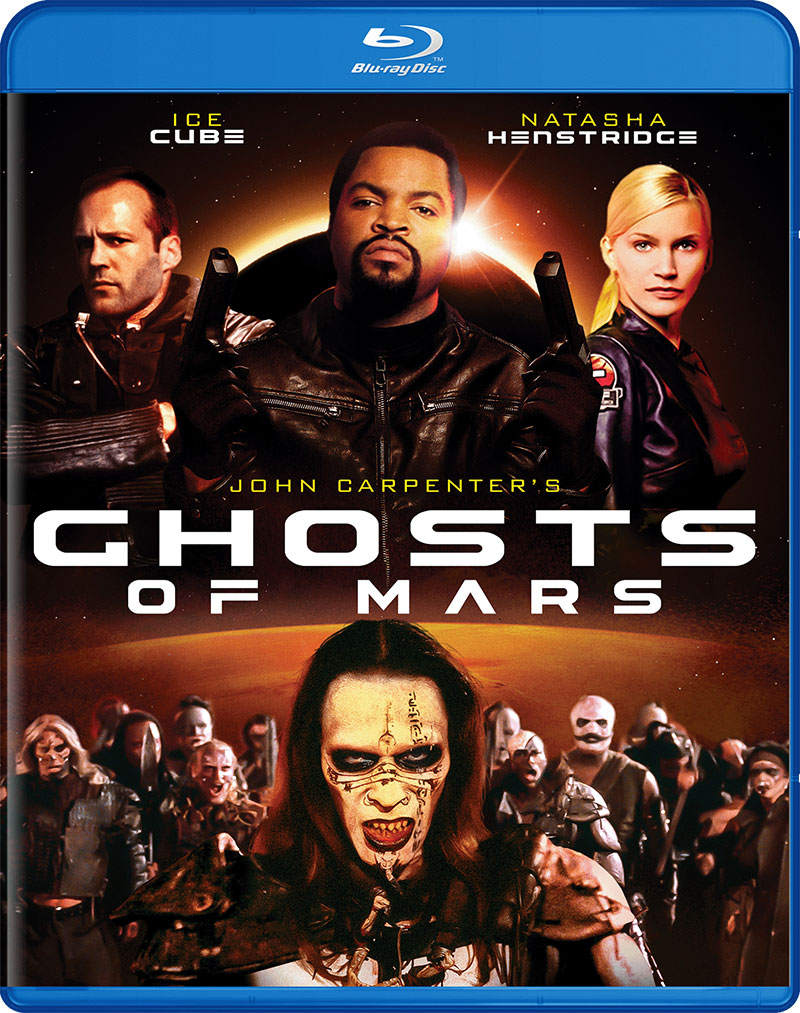