One of the great benefits of dating someone who’s a decade younger than I am is that I get to try to explain 80’s films to her from time to time.  It’s invariably through these talks that I am made aware of just how wildly inventive and perhaps foolishly ambitious some of these films actually were.  I’d try explaining the plot of “Ghostbusters” to the uninitiated, but really, what would be the point?  Suffice it to say that the film stars an absolutely inspired cast, including Bill Murray, Dan Aykroyd, Harold Ramis, Sigourney Weaver, and Rick Moranis – all in fantastic, career-defining roles.  But truly – try explaining the plot of a film like this to someone who’s never heard of it without sounding like a nutcase.  It’s rather difficult.  but then, thats what made the 80’s such a remarkably fun time for movies.  They took chances, told fantastical and (gasp) original stories, and were made at a time when not everything was entirely possible just yet, allowing for just enough of the seams to show to let the viewer behold the humanity behind the magic.  But as this section is about plot, I’ll take a crack at this one.  The narrative, such as it is, involves a group of failed scientists catching ghosts and storing them in the basement of a building in downtown Manhattan, a green blob that slimes people it doesn’t like, the playful trashing of a snooty hotel, a giant marshmallow man attacking the city, a foot-and-a-half sponge migration, people turning into demonic dogs, a gateway to hell opening right over New York, a scared-out-of-her-socks librarian, a really big twinkie, dogs and cats living together, mass hysteria, and every molecule in your body exploding at the speed of light.  Sounds like a great time at the movies, doesn’t it?  As countless fans of this film already know, it definitely is.  Somehow, against all odds (and perhaps reason), this wild and crazy mixture of science fiction, comedy, and comic horror got just about everything right and cemented itself firmly into the social consciousness for decades to come.

Now, there’s been a lot of talk (I might more accurately say grumbling) online about these new “Mastered in 4K” Sony Blu-rays.  For those who are a bit jaded by all this newfangled tech and formats that seem to become obsolete just as they get a firm foothold, let me simplify this matter right now.  This disc is “Ghostbusters (Remastered)”.  That’s it.  You won’t need a new player to watch this disc.  You won’t have to even go near a 4K television.  The disc is not 4K in any way.  We’re talking plain ol’, run-of-the-mill 1080p here, people.  The fact of the matter is that these titles were newly transferred from a 4K SOURCE.  Now, that is hardly a new feature for Blu-ray Disc, nor should it be marketed as such.   Many, many films are regularly mastered from 4K sources and then down-converted to 1080p resolution.  That’s just standard practice, and it has been for years now.  The campaign that Sony is pushing here is misleading at best and downright dishonest at worst.  When I went to tried to find this particular release at a local big-box retailer (a feat in and of itself, I assure you), I finally located it near the back of the store, housed in a display under a 4K television, touting these discs as the next great thing in home theater technology.

I’m not going to sit here and say that this re-release of “Ghostbusters” has no merit.  Far, far from it (see video section below).  But what I do need to use my soapbox to say is that studios need to stop assuming that the consumer is some low-information schmo out here who can’t tell 4K from VHS, and prefers to view movies at home on TV’s set to vivid mode with the sharpness cranked to maximum.  Maybe I’m exaggerating a bit, but the principle is sound.  All my life, I’ve seen people in positions to sell the latest and greatest technology to unsuspecting people take advantage of ignorance.  An employee of a large chain electronics store once attempted to sell a close friend of mine a $100 HDMI cable, gambling that she wouldn’t realize that she could get the same cable online for a tenth of the cost.  I regularly hear Plasmas bashed in favor of newer LED’s, despite the former being the superior home viewing technology.  Now, I wouldn’t liken these new “Mastered in 4K” discs to practices quite THAT underhanded, but it still smacks of banking on people not knowing any better but thinking these discs are, in fact, 4K software.  Such tactics undermine a potentially great new development for home theater before it even has a chance to take off.  Imagine if people assume these ARE 4K discs and get them home.  The consensus then will undoubtedly be “what’s the big deal deal”?  While I personally think that phrase will ultimately become synonymous with even true 4K in the end for anyone not watching their movies on a 100″ television, I’m never one to root against bigger or better – especially where film preservation and presentation is concerned.  People interested in these releases should consider them what they are – and what Sony, responsibly, should have marketed them as: remastered.  Does this disc look outstanding?  Absolutely.  But it’s nothing more or less than what the best of Blu-ray can offer WHEN DONE WELL.  Perhaps if more studios invested the time, effort and care to release their films in the best possible quality THE FIRST TIME, people wouldn’t be so jaded with these re-issues.  And maybe you wouldn’t see so many people not be able to discern the difference in a low-quality Blu-ray and a high-quality DVD.  The entire landscape of home entertainment could be altogether different than what it is.  And it still could be.  It’s all in how we choose to move forward.

In a word, freaking spectacular.  Okay, so that’s two words.  But honestly, if you can come away from this presentation being any kind of videophile and not just involuntarily spew out superlatives describing it, then you’re just not as passionate about film as I am.  This transfer is simply jaw-dropping.  Every shortcoming of the previous disc, from the blown-out contrast levels and solid-white fog clouds of the Gozer scenes to the rampant digital noise and gamut anomalies in dark scenes have been utterly busted on this Blu-ray.  I absolutely cannot stress enough that this (barring REAL 4K, of course) is THE definitive presentation of “Ghostbusters”.  I’ve owned this film on pretty much every home video format on which it’s ever appeared, and this disc leaves every single one of them in the dust, looking like the antiquated efforts they now are and evidently always were.  I threw in my old Blu-ray just to do a few side by side comparisons, and the difference was startling, profound, and instantly noticeable, even for the most undiscerning of viewers.  The old disc demonstrated a jitteriness in the image that I honestly never noticed until I compared it to this version, which is absolutely rock-solid and still.  The rampant and excessive grain that caused so many to gripe the last time around has been VASTLY improved here.  And by improved, I don’t mean scrubbed clean.  What I mean is that it’s far, far better resolved and film-like than before, without ever appearing remotely digital or artificial.  This is the single finest presentation of grain I’ve seen on any title this side of Criterion, folks.  It’s that good.  And as for the rest of the image?  It’s not an exaggeration at all to say that it’s nearly flawless.  So very nearly in fact that, considering the film’s vintage, I’m giving it a perfect score.  Colors pop without any trace of bleed, skin tones are spot on, and black levels are as inky as I’ve seen on a catalog title in a long time.  Detail level is positively outstanding.  There’s an establishing shot of the ghostbusters’ headquarters at the start of one of the chapters, and I couldn’t help but pause and marvel at what I was seeing.  Every bit of graffiti on the walls was perfectly legible and crisp.  And as I mentioned, the contrast issues of the previous disc have been corrected to such a degree that it should make anyone seeing the two discs side by side wonder if the director of photography (who personally approved the last release) needed some corrective lenses.  If it sounds like I’m gushing over this release, well, I am.  This is how “Ghostbusters” always could have and should have looked in HD.  This is a video upgrade so well worth the double dip that I’m foregoing knocking the overall score due to the lack of extras, because really, this transfer is why you should be buying this disc.  My advice is to hold on to your old Blu-ray for the extras if you want them and watch the film on this disc from now on.  We can fault Sony all day about how this release was marketed, but the results are indisputable.  Subtitles are available in English, English SDH, Arabic, Dutch, French and Spanish.

This new Blu-ray contains the exact same Dolby TrueHD 5.1 audio mix that came with the prior release.  Unlike the video, however, the quality of the TrueHD track was always fairly good to begin with, with a playful presence that is actually quite lively (and bassy when called upon), especially for a mid-80’s comedy.  But as my editor would say, we’re not here to reinvent the wheel, so here are his thoughts on that first disc’s audio track: “I was fairly impressed with the results.  The sound in movies has improved exponentially since the release of this film, but “Ghostbusters” hasn’t really ever sounded better.  The surrounds really kick in when the weapons are activated in the film and the constant whining of the siren is pretty cool too.  Dialogue sounds a bit on the “dated” side in that some of the parts are a bit hollow but, on the whole, it’s a good track”.  There’s also a French Dolby TrueHD 5.1 track available for those just dying to hear Venkman’s “so be good, for goodness’ sake” line dubbed into the Romance languages.

Well, first up we get the same spiffy opening logos that Sony’s been throwing on Blu-rays since the birth of the format.  Then there’s that nifty green electrode thing that lights up from left to right when you’re waiting for the extra-special animated menu screen to appear.  But that’s not all!  We’ve also got the exact same scene selection chapter breaks as on the previous Blu-ray!  Did I mention the “Play Movie” feature?  Well, I should have, because it’s there.  Am I blowing your mind with all these terrific features?  I am, aren’t I?  I know you’re excited, just sit down and breathe.  Now, as for the rest of you with ridiculously high expectations who came to this disc looking for any of the trailers, commentary tracks, deleted scenes, featurettes or documentaries that have shown up on prior releases of “Ghostbusters”, you’re going to come away just a slight bit underwhelmed by this disc.  That’s because it’s barer bones than your average trip to the Museum of Natural History.  It’s the Superbit era all over again, folks, and it’s back with a faux-4K vengeance! 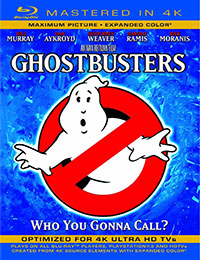