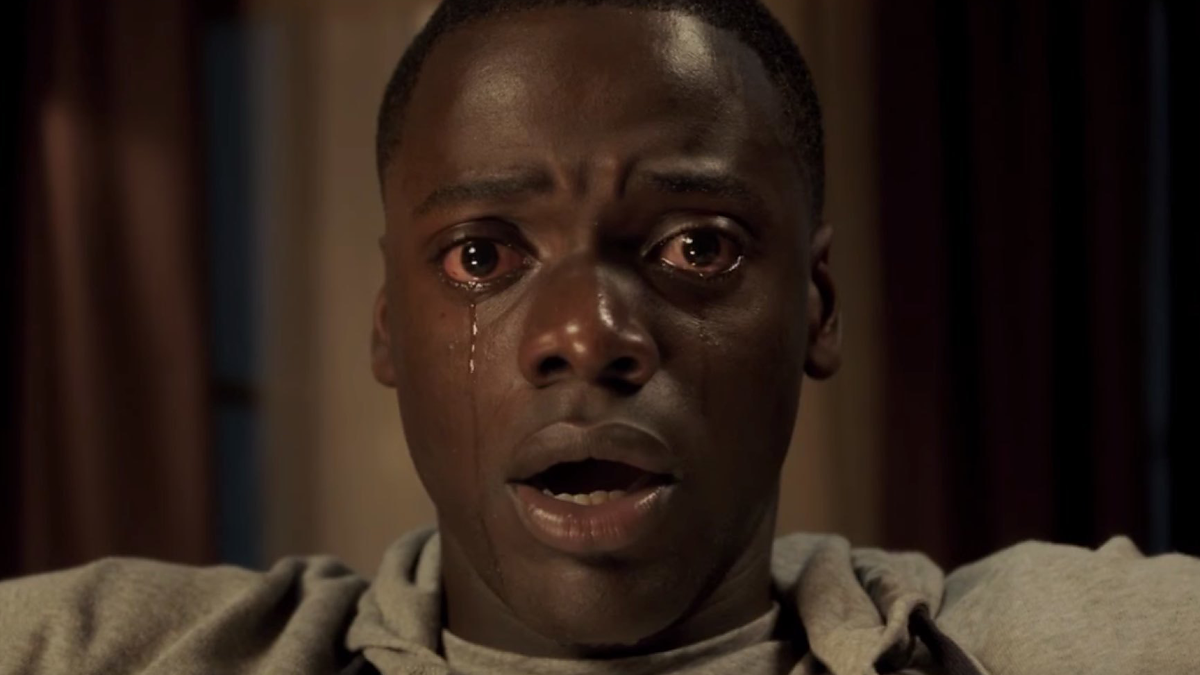 A surprise hit with both critics and audiences, Get Out is likely to make an impression on the viewer, whether good or bad. It’s the kind of film that leaves its mark for sure, even if it won’t be for everyone. It had some serious legs when it opened theatrically just a few months back. It just kept bringing in the cash week after week. I can say that overall I enjoyed it even if I find it a shade overrated. It’s still a film that’s worth checking out at least once. Written and Directed by Jordan Peele, most famous from his work on Key and Peele. The film can’t be labeled as comedy or horror, but is probably best described as horror with comedic elements. It wouldn’t be unfair to call it a bit of a satire as well.

Chris Washington (Daniel Kaluuya) is planning a trip to meet the parents of his girlfriend, Rose (Allison Williams). He feels a bit nervous about it since he is black and she is white, unsure how they’ll react to this. She assures him all will be fine, and off they go. There’s a bit of a mishap on the way there which results in minor damage to their vehicle. Almost immediately, Chris observes that the officer who takes their report is acting strange toward him, somewhat racist as well. They continue onward, but the strangeness doesn’t end there. The groundskeeper and housekeeper (both black) act more than a little strange. Chris takes note of this, but he seems to be the only one who’s aware of it, while everyone else shrugs it off. Chris is big into photography and notices that the groundskeeper gets a nosebleed after Chris takes his photo. What exactly is going on? Let’s not mention that Rose’s parents are also a little strange as well. Often trying to sound overly hip with their language and actions toward Chris.

I didn’t love Get Out as much as the many critics, but it definitely kept me intrigued and maintained my interest. Mostly, I should say. I feel the film lagged a bit in the middle and could’ve lost about 10 minutes or so. Still, it works well enough to keep us guessing until the very end. I admit that I had no clue where it was all headed, but it all adds up by the time the final credits appear. It has some pretty frightening moments, but is also quite funny at times as well. I especially enjoyed Chris’s TSA friend named Rod (Lil Rey Howery). He provides plenty of laughs in his more limited role. All the actors do fine in their respective roles as well.

With the Blu-ray having only come out a few months ago, the 4K release was a bit of a surprise. And Universal’s transfer for the Blu-ray (also included in this set) wasn’t exactly begging for a re-master). Still, there is a slight uptick in picture quality and with the added benefit of HDR, it does show. Being a horror film, there are plenty of darker scenes with shadows and contrast being no problem. Detail is sharp and the overall color palette ranges from bright and colorful to dark and “shadowy” (for lack of a better word). I couldn’t really find fault with anything, save for a few trace elements in a couple of scenes. This is a good-looking picture.

Universal appears to be going the DTS X route as opposed to Dolby Atmos – and that’s fine. Like the video presentation, the audio has a bit more added emphasis and depth to warrant an eyebrow raise out of me. I felt that it’s got enough “boom” to pack a punch and I have to admit there were a few times when I took notice. Vocals are clear and sharp, surrounds effectively used and the LFE have a few moments to shine. It’s not as “in your face” as some other horror movies, but what’s included do sound the part. No complaints here.

The audio commentary has been ported over to the Ultra HD disc with all the other supplements residing on the Blu-ray. There have been no new added supplements.

Get Out proves to be an enjoyable film with something to say. I liked that it never becomes a “message movie” or heavy-handed in what it has to say. I don’t feel it’s quite as good as most of the critics made it out to be, and it also lags in the middle. Still, it has a strong story to tell and keeps us intrigued by where it’ll all go. Recommended.