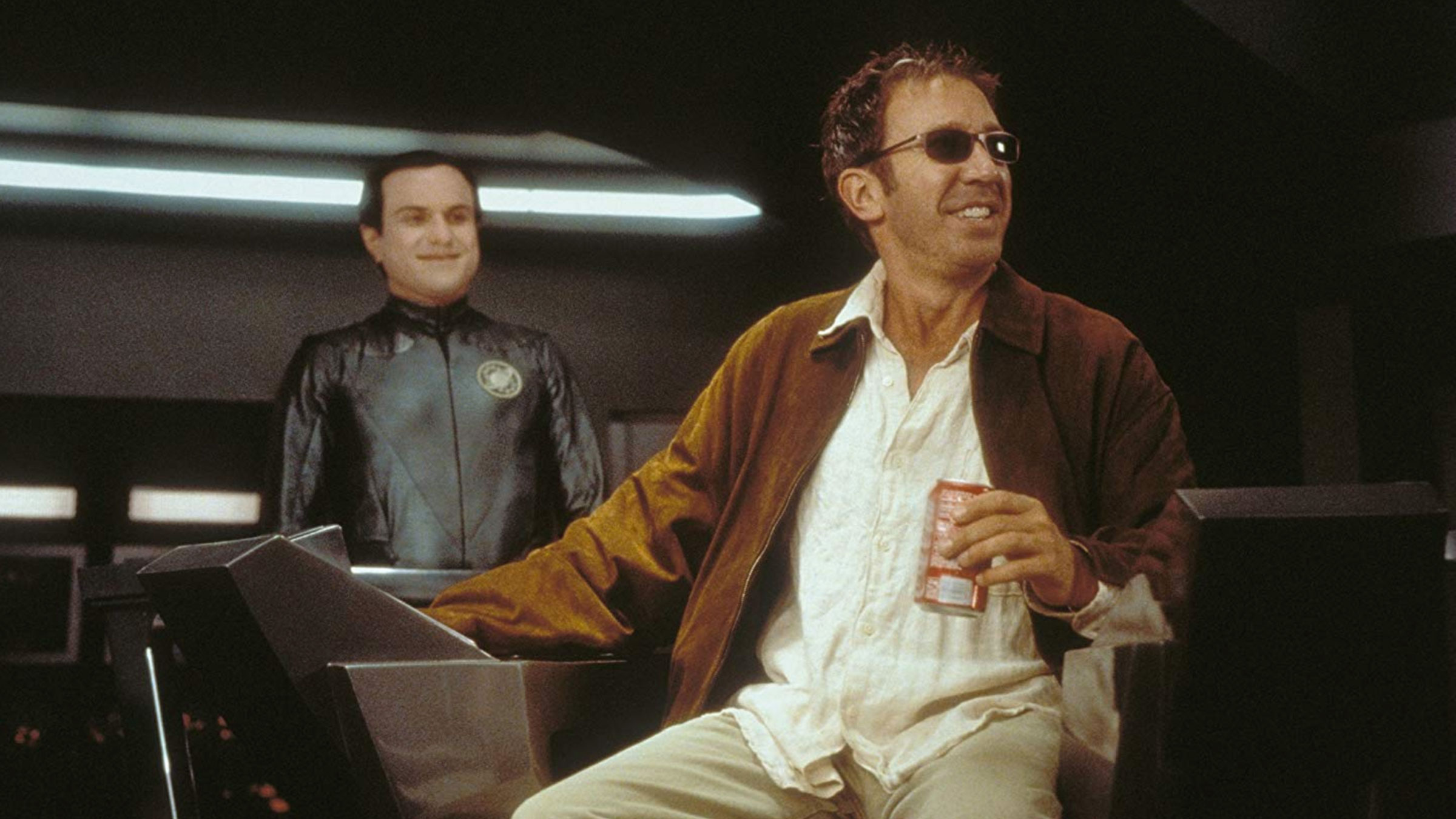 When Galaxy Quest, a science fiction space adventure television show was on the air, it enjoyed much success worldwide, even years later fans line up at conventions to meet the stars and obtain autographs and memorabilia. While the show was a success, the actors on the show weren’t able to extend that success into other areas of their careers and make their living by attending conventions and other publicity opportunities. Most of the crew seems unhappy with this idea, but not Jason Nesmith (Tim Allen) who seems to have become the cocky character he played. At a convention Nesmith meets a team of Thermians, whom he believes to be fans looking to book an appearance with him. So Nesmith agrees and soon finds himself inside a spaceship which he thinks is an elaborate set and he takes on Sarris, a mean and ruthless alien enemy of the Thermians. What Nesmith soon discovers is that Sarris is real and so are the Thermians…and they believe Nesmith is the man he played on the show. Nesmith quickly rounds up his fellow cast members and the team assumes the roles they once played, and they all find out that the Thermians have been watching their show and believe it to be real, historical documentation of their missions. Soon the crew finds themselves in a battle for survival, with their only hope being to remember as much as possible about the show and try to be the heroes they’ve always wanted to be.

If you’re a fan of science fiction movies, this is one movie that you cannot miss. I think all viewers will find plenty to like with this film, science fiction buffs will discover a wealth of inside jokes and spoofs, which make the movie twice as funny. While not an all out satire, Galaxy Quest does look at some of the conventions of science fiction, especially Star Trek both on the screen and off. If you’re a die-hard Trekkie, you’ll need a sense of humor to withstand some of the humor at the expense of convention goers, but it all seems to be in good fun. So this is more of a loving spoof instead of a mean spirited satire, which I feel was the correct choice. Aside from the hilarious dialogue and situations present, you’ll also find some excellent computer and make up effects. From the panoramic space shots to the rock monster, it all looks terrific, especially the make up effects that create Sarris. I also feel the cast was perfectly chosen as all seem to have fun with their roles and be believable in their parts. I give this movie my highest recommendation and the disc is also a top notch release, so whether you choose to rent or buy, Galaxy Quest is a worthy investment.

This hilarious and witty film was directed by Dean Parisot, who has limited experience behind the camera for both television and feature films. The visual impact of this film is tremendous and the movie captures the essence of the science fiction genre to perfection, so Parisot knew what he was doing with this one. He seems to have a knack for the comedic arts and I hope to see him back with a new film very soon. His other motion pictures include Home Fries and The Crew, while television projects include Get A Life! and Northern Exposure. This is an ensemble piece to be sure, but Tim Allen and Sigourney Weaver seem to take center stage on several occasions.

Galaxy Quest soards onto this new Blu-ray with…the same transfer it had for its previous Blu-ray release. That’s not bad, but when touting a new release (or at least one with metal packaging), it’d have been nice to have a new transfer and maybe even a 4K release. But Paramount is sometimes (read: usually) lazy when it comes to things like that, resting on their laurels and simply giving fans a new case and/or new cover art. All this aside, the film doesn’t look that bad. I remember my first viewing on DVD oh so long ago and was impressed at the way it looked. Colors dazzle, detail is spot on (required for viewing Sigourney Weaver’s ample bust in this film) and an overall filmlike sheen add to what was (and still is) a good-looking picture.

The DTS HD Master Audio track is also the same as it was before and we get a few moments when it shines. Vocals are top notch, though I kept waiting for Tim Allen to say “To infinity…and beyond!” I know, wrong movie. Some surround effects, particularly in the final act, make for a good-sounding track. I did notice some directional effects that didn’t seem to be present before, but knowing me I probably had my surround sound set up wrong. At any rate, this is a fairly standard DTS track that’s sure to satisfy.

Twenty years later Galaxy Quest still manages to entertain. Or as my wife says “That’s a cute movie.” And it is. It’s enjoyable and it’s even been somewhat parodies, albeit a darker version, on Black Mirror. This Blu-ray steelbook is neat, but it’d have been nice for some new features, new audio or a new transfer. Sadly, none of those made it. Maybe the 25th anniversary?