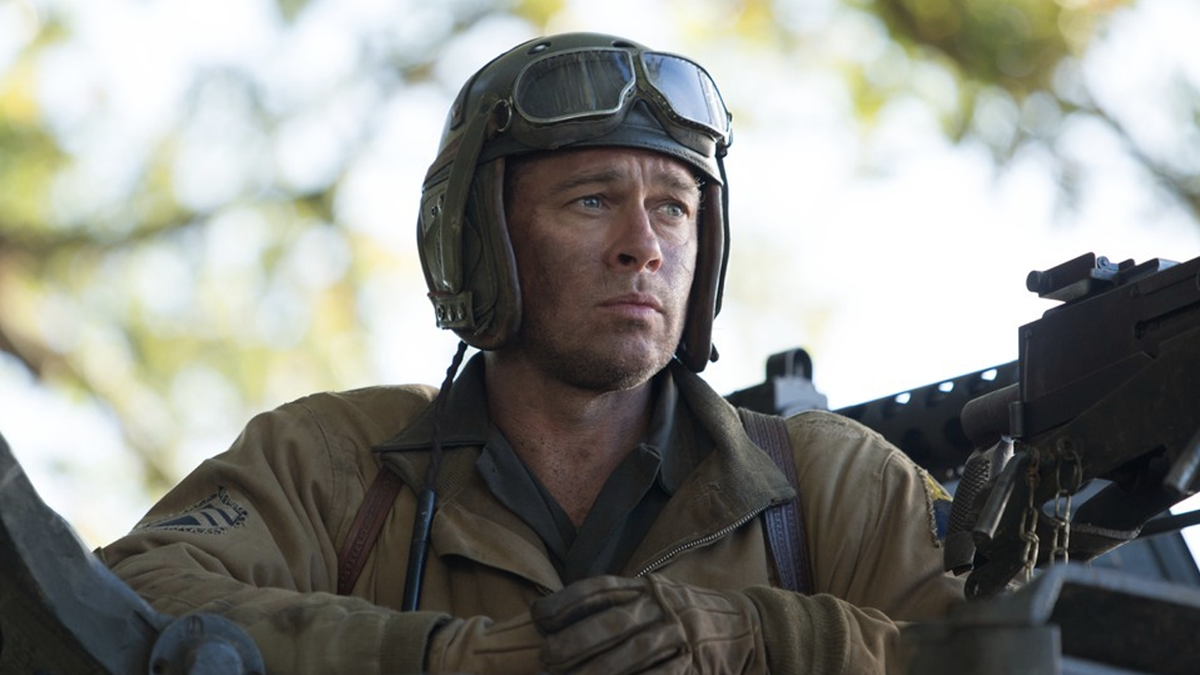 Brad Pitt stars as Sgt. Don “Wardaddy” Collier in Fury. Other members of what will eventually become a 5 person team, include Shia LeBeouf as Boyd “Bible” Swan, Michael Pena as “Gordo”, and Jon Bernthal as “Coon-Ass” and Logan Lerman as Norman “Machine” Ellison. At first, he’s surprised to be placed inside a tank since he’s only a typist, but desperate times call for desperate measures, and ultimately, he becomes a pro in the tank. The film is set in Germany in 1945. Their situation becomes much more severe when an attack leaves the five of them left against an army of Nazis. You might have seen the ads for Fury and think you have a general idea of how it’ll all play out. That’s only partially true as the film offers several “Fresh” elements, so to speak. For one, the entire middle act comes to a screeching halt when the soldiers find themselves getting some rest in a secluded, bombed-out area. Usually, this decision might’ve really hurt the film, but I think it benefits it as it offers a nice change of pace for a war film. We see a softer side to the film as Norman falls in love with a German woman. Some of the other men mistreat her and disrespect her, but “WarDaddy” eventually puts a stop to this, and she and Norman continue to grow closer. Don’t expect a happy ending to this scenario, though. Before long, the film is back to business.

It’s been a while since we’ve seen a good old-fashioned war film like this. It has its heart in the right place, but the intensity to the action sequences are what also help elevate this above other films. Some portions might be more familiar, but the story held me and there was a surprisingly good amount of character development. The cast (led by Pitt) does a great job here. The last two war films that really made an impression on me like this were Windtalkers and We Were Soldiers. This film more than delivers its share of exciting sequences that don’t shy away from the harsh realities of war. Director David Ayer (Training Day, End of Watch) does a nice job of keeping the film moving along, never dragging, but also not letting things feel rushed. The soldiers are faced with an almost impossible scenario to get out of, and that adds to the film. Fans of wars films should definitely check out Fury. It’s a cut above other films in the genre.

Sony has pulled out all the stops for this 4K issue taking an already good-looking picture and giving it the added benefit of HDR. I remember seeing Saving Private Ryan about 15 years ago and remember not only seeing, but actually feeling how somber, cold, dark, bleak and grey everything was. It was war. In much the same way Fury looks and feels just like that. The 2.40:1 HEVC 4K image is grizzly in its depiction of war and with every razor sharp detail, the action seems to become more and more lifelike. The color palette isn’t warm and fuzzy and I wouldn’t have expected it to be. The contrast works well with the black levels on nearly every scene – the dark circles under the actors’ eyes, looking at the battlefields….everything is presented in the most lifelike detail I can imagine. And this isn’t a movie that’s easy to watch, so kudos to Sony for providing a top notch transfer, but it’s nearly a double-edged sword in that it makes Fury all the more real.

There are war movies and then there are war movies. Fury falls in the latter category. The DTS HD Master Audio mix found on the Blu-ray has been replaced by a new Dolby Atmos mix that brings it up a notch.  The LFE make the room quiver after bombs explode, the hissing and whizzing of bullets provide almost a dizzying effect during some scenes as well. Vocals are rich, pure and crisp – the grizzled voice of Brad Pitt suggests the terror and hell that he and his crew are going through.  Certainly this is just one of those movies where you turn up the volume and let yourself become immersed in the aural atmosphere. It’s an amazing track.

Looking back at our original Blu-ray review, it seems that this new 4K version features some new supplemental material that’s located on the 4K disc itself! What a concept! The Blu-ray and its supplements remain intact, as expected.

This Ultra HD version of Fury offers a better picture, more robust sound and more supplements (that are actually located on the 4K disc, not the Blu-ray)! This, coupled with Saving Private Ryan on 4K could make for a very interesting and entertaining one-two punch for gritty war movies.