From Beyond the Grave (Blu-ray)

Back when Hammer Studios was a draw at the box office, there were some small studios that made films that could easily be mistaken to be Hammer productions. One studio that followed the Hammer formula with success was American-owned Britain-based studio Amicus. Warner Archive recently announced that they would be bringing the horror anthology From Beyond the Grave to Blu-ray as Halloween drew near. Fans of Amicus were excited because this was the last of the anthology films from Amicus to finally arrive on Blu-ray with the others having already been released by Shout!Factory, Severin Films, and others. When my copy of the film arrived, I watched it.

In the first story, Edward Charlton (David Warner) buys an antique mirror from a mysterious salesman (Peter Cushing) at a curiosity shop called Temptations Ltd., Antiques. When Edward invites friends over for a party, they hold a seance. The seance summons a man into the mirror that only Edward sees. Soon, Edward begins killing women at the command of the man in the mirror.

In the second story, outside the curiosity shop, Christopher Lowe (Ian Bannen) buys some shoelaces off a former serviceman (Donald Pleasance) peddling wares on the street. After dealing with his unsupportive wife at home, Christopher continues to visit the street peddler. The peddler invites him to have tea with him and he agrees. He meets the peddler’s daughter Emily (Angela Pleasance.) What follows is a story of voodoo and adultery.

In the third story, a man enters the curiosity shop and purchases a snuff box. On the train, he is told by a woman that there is an “elemental” feeding on his very soul. She offers her services and her name – Madame Orloff. He doesn’t believe the woman and heads to his house in the country. Soon the elemental force that has attached itself to him begins lashing out at his wife violently.

In the fourth story, a young man named William Seaton buys a large carved art piece from the curiosity shop. He uses the art piece as a door at his home. The door has a carved face on it. While alone with the door, the door opens, and William finds himself transported into a strange blue room with a strange portrait of a man. It is not long before he realizes that this room holds an evil force.

From Beyond the Grave is a thoroughly enjoyable anthology film. It’s really weird and unique – with enough madness, humor, and violence to make horror fans satisfied without falling into the trap of becoming exploitation. I like that the stories are never extremely scary but they all end with macabre twists. The violence is muted and the film is not very bloody, but I still would probably not show it to kids that are very young. That PG rating is probably a PG-13 today.

The script by Robin Clarke and Raymond Christodoulou adapts some short stories from the notable British horror writer R. Chetwynd-Hayes. I had never heard of this writer but based on a cursory search I found that he had written roughly 200 short stories and was a favorite in the UK. Fans of the show Tales from the Crypt and Night Gallery will enjoy these small vignettes. Fans of the Hammer studio films will enjoy seeing the familiar faces of both Peter Cushing and David Warner in their roles.

After watching the film, I can conclusively say that the moral of the film is simple: don’t buy any antiques or enter curiosity shops. If you like Hammer horror films, I feel safe recommending this anthology. It’s a lot of fun.

Don’t be scared to look! Warner Archive has provided a great looking transfer in 1080p with an aspect ratio of 1.85:1. As is Warner’s custom, the new transfer comes from a new scan of the best available elements. The film has been cleaned up nicely and thanks to its colorful palette it looks great on Blu-ray. Fans of Amicus will be glad to see the work performed here.

Warner Archive has provided a DTS-HD MA 2.0 track. The sound quality is pretty excellent. Dialogue was crystal clear. The film has a great score by Douglas Gramley that sounds excellent in this audio presentation. It’s a great track overall.

From Beyond the Grave is a fun and satisfying anthology film from Amicus Studios. All four of the stories are interesting and quaint and it was great to see Peter Cushing in a small role. The script is well put together and the film doesn’t have any notable weak spots. The new video and audio presentations by Warner Archive are excellent. The only downside to this release is the lack of supplemental material. Recommended! 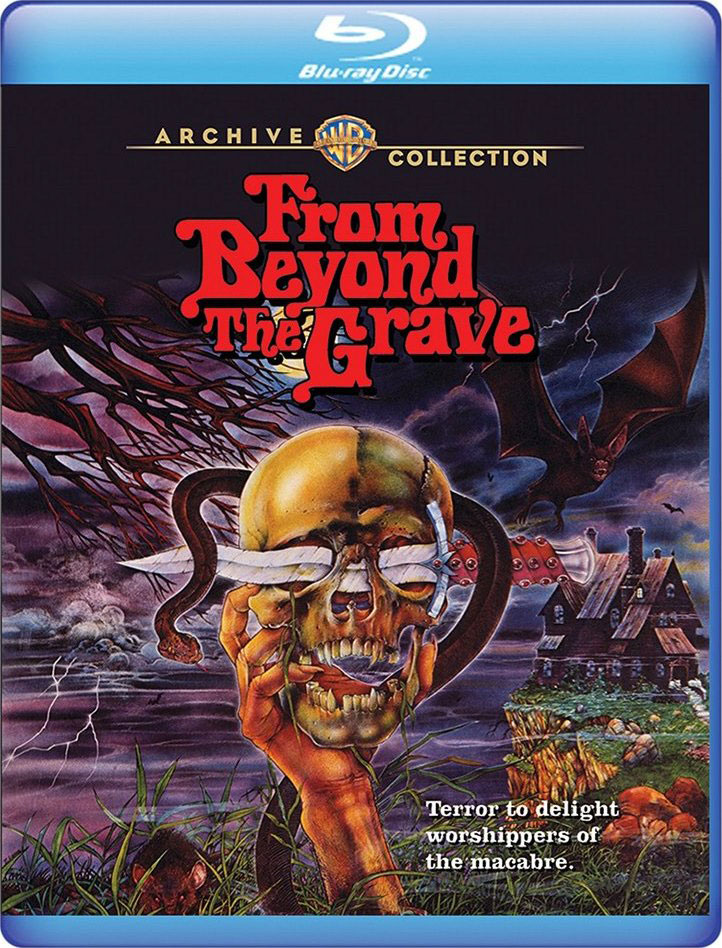