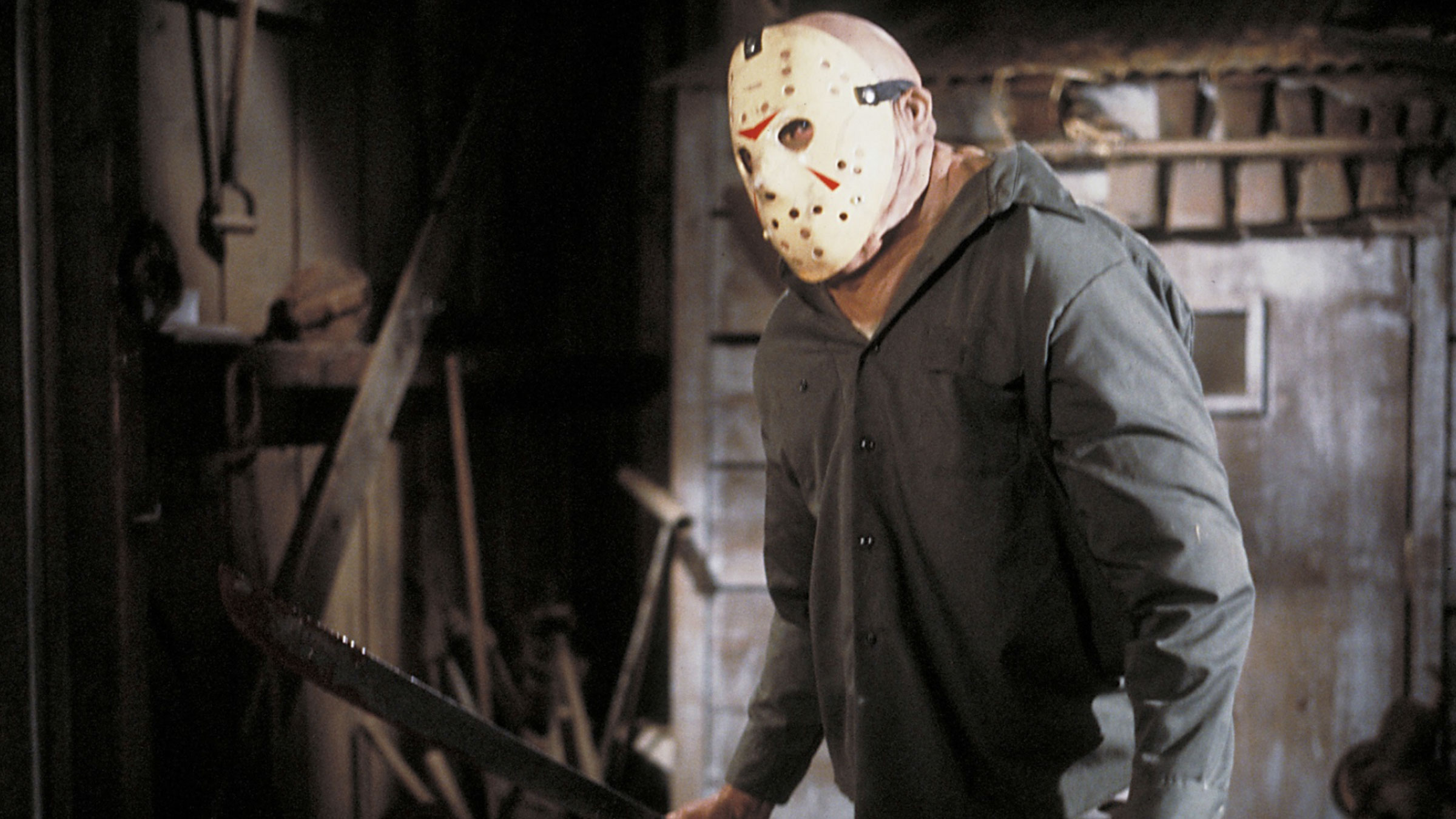 Shout Factory released a massive box set of all 12 films in the Friday the 13th series. This includes the first 8 films (which is what we get in the set reviewed here), along with Jason Goes to Hell, Jason X, Freddy Vs Jason, and the remake. I bring this up, because, for true collectors, that is clearly the set you want to have. However, if budget concerns and lack of interest for the later films as well as more features doesn’t interest you, you could do a lot worse. I have a been a Jason fan for years now. This extends all the way back to the VHS days where my friends and I would scour the video stores looking to rent the next one. I have also owned all the DVDs as well as some of the Blu-Ray discs over the years. Since I am constantly trading up or selling films in my collection, I somehow wound up with far fewer of these films in my collection. I didn’t spring for the big set from Shout (though I was tempted), but I am happy to at least have this one. I will delve into what you can expect from it later, but let’s first look at the films, shall we?

What do I really need to say about the film that started it all? Well, for one it is still very effective and has some genuine scares. We know the basic setup. That is a bunch of camp counselors are suddenly killed off one by one until the final reveal in the last moments of who the actual murderer is. We might hear about the legend of Jason, but we know who is really behind it all. For this film, that is. While the film might be a bit slow for more modern audiences who expect things to hit the ground running, I still find it very effective. I had the pleasure of being able to see it in theaters for its 40th anniversary and it was quite a treat. It should be noted that the disc includes the R rated theatrical cut. The digital copy of this film is uncut, however.

Taking place five years after the Camp Crystal Lake murders, this sequel pretty much follows the template set in place by the first film. For the most part, I think it gets away with it. Jason doesn’t don the infamous hockey mask until the third film but has a creepy looking sack on his head for this film. In one of the features, we learn that some comparisons were made between it and The Elephant Man and that played into them wanting to change his look. So, while not my favorite film in the series, it kept me with it.

Taking full advantage of the 3-D craze in the 80’s, this sequel was released in that format. It is also where the infamous hockey mask made its first appearance. While that element was new, this sequel still refuses to shake things up too much, careful to not try and fix what isn’t broke. We are introduced to another group of camp counselors who smoke, drink, and have plenty of sex, all while awaiting their tragic fate. The blood and gore are in full force, and we’re given pretty much what we can expect. Take that for what it’s worth.

Friday the 13th: The Final Chapter

It should read “The final chapter… until the sequel. Full disclosure: For the longest time this was my favorite of the Jason films and I would still place it near the top if I were to comprise a list. This is the film that introduces us to Tommy (Corey Feldman) who, along with his sister Trish (Kimberly Beck) and Mother Mrs. Jarvis (Joan Freeman) are now neighbors to a group of six renting out the house next door. Tommy is something of a monster geek and creates a lot of masks. Jason is on the loose, a bunch of kids are camping out. What more plot summery do you need here? We know the drill. If you’ve stuck with the films this long, then it should be no surprise what happens next. I don’t know what it is about this one that always stuck with me, but it felt firmly established at this point. We’re used to the hockey mask by now and Jason can do his thing. Not to mention there are some great kills and nudity in this one. It also starts the whole arc with Tommy and that says something.

In what is surely the most divisive Friday film, this one still holds a special place with me. We are introduced to the adult version of Tommy Jarvis (Now played by John Shepard). We can recall the tragic events for Tommy in part 4, and now he is in a mental hospital after having witnessed the things he did. Tommy is sent to a youth development center. While Tommy might seem a bit off and withdrawn, it is nothing compared to some of the residents at the youth center. We see a resident get killed by another, after he becomes frustrated at his nagging. It’s a sequence involving an ax that always stayed with me. The kid is taken away by the cops, but it’s clear that trouble is still out there. Tommy has visions of Jason, and before long the body count rises.

This film is such a product of the 80’s, with the cheesy music and wardrobes to the slang and hairstyles many of the characters exhibit. And then there’s the big reveal at the end. I imagine that is what might’ve turned off some viewers back in the day, but I like the choice and it shows that the series was willing to take some risks, even though the basic framework is intact. Above all else, there are just some outright hilarious moments here. Some are not necessarily meant to be funny, but the cheesy factor takes over. A death in an outdoor toilet is one that rings to mind. Also, some of the residents and their loony behavior scores some mileage.

While this 6th outing gets us back to Jason doing the killings, it still is a rather pedestrian one. I enjoy this one overall, but it isn’t one of my favorites and it isn’t one that I rush to watch over like some of the others. Still, it has its merits. Tommy Jarvis (This time played by Thom Matthews) has an itch to close the chapter on Jason, so he digs his grave. He finds the rotting corpse, but there is a lightning strike which strikes Jason back to life. Jason kills Tommy’s friend, but Tommy manages to escape. Tommy tries to warn the authorities, but they don’t believe him and lock him up. Meanwhile, Jason is on the loose and the killings start. Before long Tommy is released and told to leave well enough alone, but Tommy insists, and mayhem ensues. This entry just felt lacking. Nothing of great importance happens and it seems to be running on fumes much of the time.

For the seventh film, we get a paranormal twist. We see a young girl named Tina arguing with her father. Before long, she wishes her abusive father dead, and he dies on the pier where the argument is taking place. We then flash forward to an adult Tina (Lar Park Lincoln) where she is recalling the incident of her childhood with her psychologist. There’s a nearby cabin and one night Tina is pressed by her doctor, and she wishes that her father would return. Instead, this resurrects Jason. Tina sees Jason return, but in typical horror movie fashion, nobody believes her. Anyway, the killings start to happen, and we can pretty much guess what happens next.

This entry is a middling one, but it has some very effective sequences. We get to see Jason without his mask on, which kind of rubbed me the wrong way a bit. It is both somehow rewarding and off-putting at the same time. I mean that in how it takes away the mystique and is a bit silly and gross. Still, this one works well enough to stand on its own.

And to conclude our box set we have the 8th film in the series. It is probably the cheesiest film in this series, and it seems to be a love-it-hate-it sequel. I just may fall in the middle, but it does have its charms. Over time, it isn’t one of my favorites, but the little moments throughout it always stand out for me. I can think of a moment where a character continually punches Jason to which the killer strikes one blow, knocking his head clean off. It’s an effective kill for sure. Once again, Kane Hodder returns as Jason, and one may recall the events from the 7th film. Jason was left at the bottom of Crystal Lake, but an electric shock brings him back to life. He starts his kills on a houseboat which is taking some High School seniors to New York.

Take away the setting, this one is pretty much more of the same. Manhattan comes into play about midway through and it features the usual killings and what have you. It moves along quickly enough and gets enough right to justify its existence. It may not take full advantage of its premise, but enough works to not feel like a loss.

This set includes remastered versions of the first 4 films. There are varying aspect ratios here. We get some at 2.35:1 and 1.78:1 respectively. I couldn’t do direct comparisons of the first four to older transfers, but the results are very satisfying here. There are strong black levels and deep colors, and the prints all appear to be clean looking. There are some instances of grain and a few print flaws from time to time, but overall, great care has gone into these, especially the four remastered films.

This release includes DTS HD 5.1 tracks and all of them are more than capable of delivering the goods. These are films best enjoyed with a good system and in a good atmosphere to make the most of the occasion, so it helps when the vocals and soundtracks are all up to the modern-day standards. The Shout set is said to also include the 2.0 versions, which is understandable if some like that option, but I will keep with the 5.1 regardless. The surrounds are great for the various kills we find here. Vocals have the expected clarity, but on some occasions the volume might need to be adjusted accordingly. Nevertheless, this proves more than satisfying.

This 6-disc set includes virtually all of the extras found on the previous Paramount editions of the films. The Shout set contains those and boatloads more, so buyers should really decide if they want to get this or opt for the Shout, which I’m sure most would have purchased by now. This edition ships in a red case that is just a bit thicker than the standard Blu-ray case. Be advised that the discs can become dislodged during shipping. My case was actually cracked, but no discs were damaged. There isn’t a slipcover, but we do get digital copies for all 8 films. The features here are spread across the 6 respective discs.

Here it comes. You know by now, but this is simply the more affordable option for those who don’t yet own these and only want films 1-8 and don’t care AS much about features. Make no mistake, we get some great features here, and the red case is neat, but the Shout set is a force to be reckoned with. So while you can’t go wrong with this one, it may be in the back of your head that you should’ve opted for the massive one from Shout.