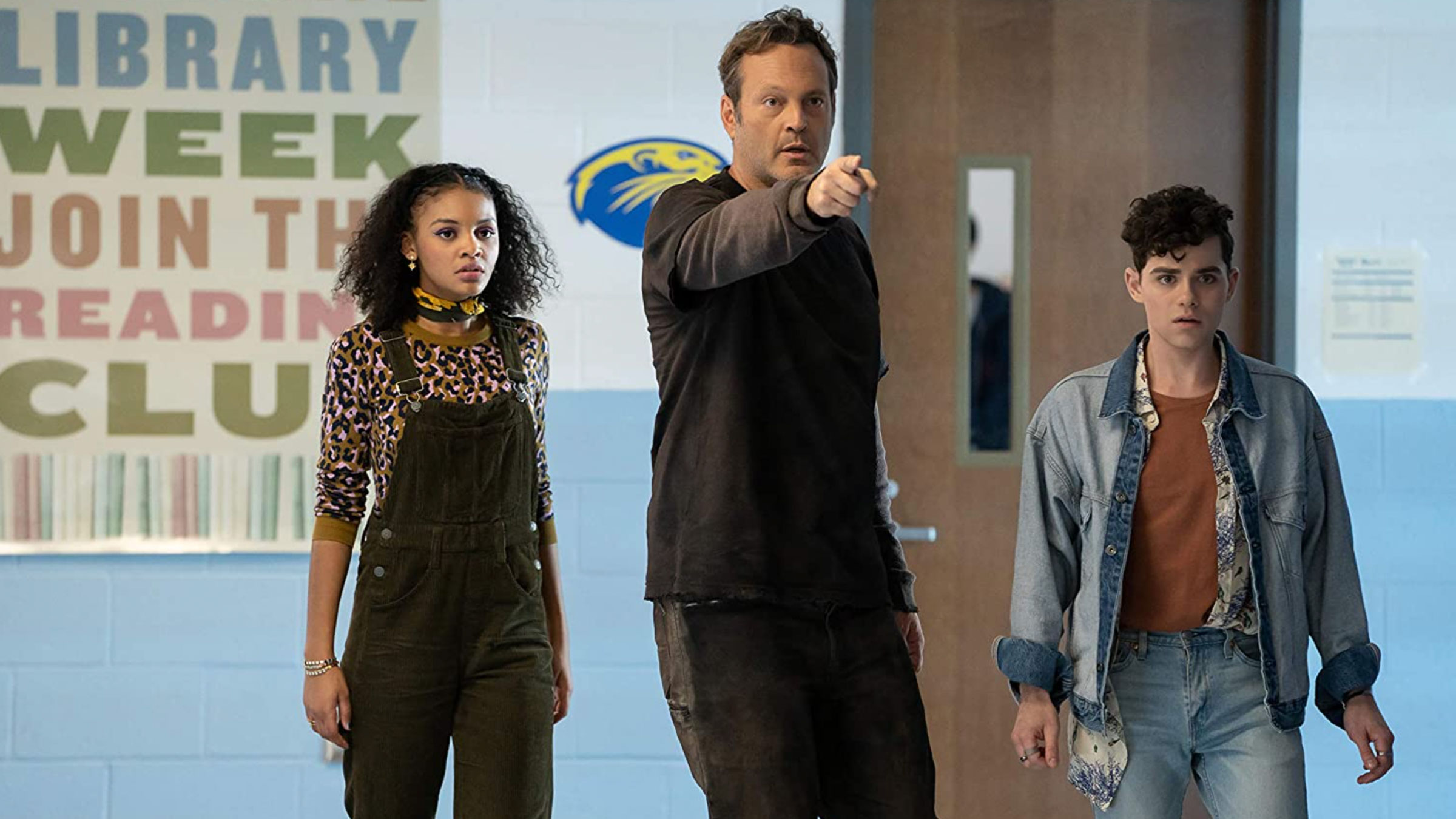 When it comes to horror movies, I think we’ve all seen just about everything that can be offered. So it when we combine genres that things start to get interesting. Director Christopher Landon did this well with two of my recent favorite films: Happy Death Day and its sequel. By taking the Groundhog Day approach and combining it with a murder mystery, it seemed to breathe new life into what was becoming a tired and boring genre. This must have sparked something in a few writers as we now have what can only be described as Freaky Friday meets Friday the 13th (actually that was one of the original proposed titles). This approach puts a fun new spin on something very familiar to us. And that’s most of the fun.

Millie Kessler (Kathryn Newton) isn’t the most popular girl in school. She lives with an alcoholic mother, Paula (Katie Finneran) and sister, Charlene (Dana Drori) who’s a police officer. Her days are spent dueling with her shop teacher, Mr. Fletcher (Alan Ruck), pining over Booker (Uriah Shelton) and hanging out with her friends: Nyla (Celeste O’Connor) and Josh (Misha Osherovich). Teens in town are being massacred by the Blissfield Butcher (Vince Vaughn) and, as fate would have it, Millie is his latest victim. But due to the magical relic he kills her with, she and the butcher switch bodies. Millie discovers that she has 24 hours to obtain the relic otherwise this swap is permanent.

Obviously, the central joke in this film is that a meek high school girl trades her physique with that of a 6’5″ Vince Vaughn. And she manages to retain his murderous mentality. And, to his credit, Vaughn really makes the film work. The actor had been somewhat typecast in recent years (aside from his part in Brawl in Cell Block 99) so this film somewhat revitalized his career. Add to that the work of Kathryn Newton who’s done some pretty interesting things with her young career as well. Known for films like Pokemon: Detective Pikachu and Big Little Lies, she’s an actress with a very promising future. And I’d be remiss if I didn’t credit co-writer and director Christopher Landon. There are talks of perhaps merging this with the Happy Death Day franchise. Now that’s something I’d like to see.

I’m running out of ways to say this, but for the sake of this review I’ll indulge! Universal’s Blu-ray finds its way to the format sporting a very good-looking 2.39:1 AVC HD image. By and large, the color palette used is very colorful, save for a handful of nighttime scenes. Definition is razor sharp, the color spectrum is in full force and none of the usual ailments that might detract aren’t present here (artifacting, shadow noise, etc.). Suffice it to say this is another winner and with it being a new to the format disc, we shouldn’t be surprised.

The included DTS HD Master Audio soundtrack has a few moments to shine and the usual “jump scares” that are a part of any horror movie got me a few times. By and large, the soundtrack is used to promote some ambiance with the surrounds at a party of a car chase scene. The vocals take front and center here and with great effect. It’s a pretty standard offering here and one that’s sure to please.

Christopher Landon is rapidly becoming one of my favorite directors. His blend of comedy and horror make for a more entertaining film than either of the aforementioned genres. Freaky didn’t quite do it for me like the Happy Death Day films, but it’s close. Universal’s disc checks all the boxes and is well worth adding to your collection.