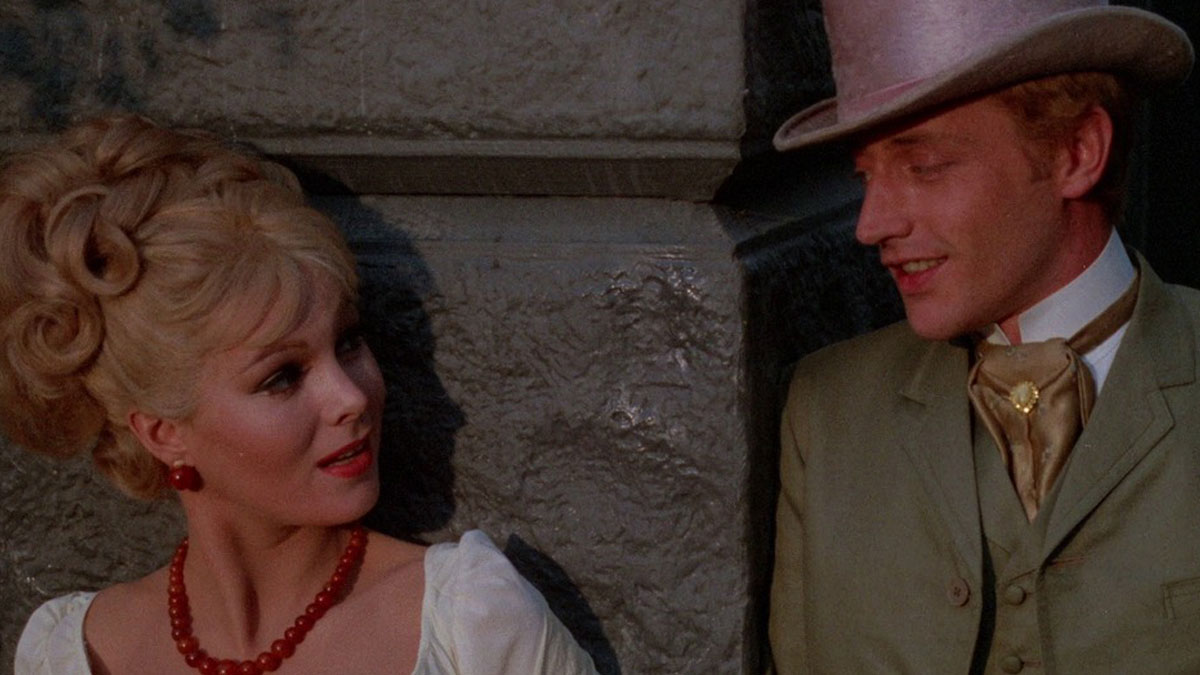 Dracula A.D. 1972, The Satanic Rites of Dracula, and The Horror of Dracula have all the seen the light of Blu-ray. And, on the heels of these releases, Shout!Factory has began releasing some Hammer Studios titles beginning with Dracula: Prince of Darkness. These releases were exactly what Hammer fans had been waiting for. Now Shout!Factory has released the 1967 film Frankenstein Created Woman starring the beloved actor Peter Cushing.

In the English country, a belligerent man is taken to be beheaded. He doesn’t seem to mind until his son shows up. Despite trying to warn his son off, his son sees the execution. Years later, the boy is now a man named Hans (Robert Morris) who works for Dr. Hertz (Thorley Walters.) They are experimenting with reviving people after flash freezing them for an hour. They revive the man in the frozen box – Baron Frankenstein (Peter Cushing.) He is trying to figure out why his soul remained within his body for the hour. He sends Hans to fetch some champagne from the girl in town named Christina (Susan Denberg) that would be beautiful if she did not have a birth defect on one side of her face. She expresses her suspicions of the Baron. Her father comes out and refuses to sell Hans the champagne on credit so he gives his jacket for the bottle. Just then three aristocratic lads show up and threaten that Christina’s father will lose his license if she does not serve them the wine. When they disrespect Christina, Hans fights the three men to defend her honor. Hans is taken out of the bar by the police and one of the boys suffers a cut to his face. When Hans gets released he stays the night with Christina and deflowers her. The  three drunk aristocrats chastise Christina from outside her window. Then they break into the bar to treat themselves to more drinks. Interrupted by the bar owner, they beat him to death. Across town, the Baron has succeeded in creating a machine that would make an impenetrable force and thus made it to where he can conquer death by repairing the body before the soul departs. When Hans returns to the bar, he is charged with the murder when he refuses to give up his alibi from the night before. Through a series of events, Hans’ soul is transported into the body of Christina.

I love revenge films. When a movie makes me despise a villainous character (or characters) and then allows me to see their comeuppance – it is pure wish fulfillment. I am not a violent man and I don’t have many people which I hold grudges against (honestly, I hope that I have forgiven anybody for anything they have ever done to me. Grudges are not a good way of living.) That said – the fantasy of striking back at some assailant that wishes you or yours harm is a fantasy that is near and dear to my heart. Because this film is a revenge film, albeit a nontraditional one, it gained extra points from me. For me – this is one of the better Hammer Horror releases of the last few years despite the fact that the anchor star Peter Cushing does not play as prominent a role in the film as in The Horror of Dracula.

As with most of the Hammer Studio films, the film is good campy fun and not just a little preposterous. For example: when Christina is revived she comes back “better” – a.k.a. prettier and blonde. Moments like that either bring a smirk to your face or they do not. If they do not, Hammer films will probably not be your forte. All of the staples are there of a good Hammer film – bad science, reliance on tried and trued literary characters, some blood that looks like paint, and some cool production design done on a budget. Fans of these films have good reason to find them charming. That said, some of them are better than others with my current favorite being The Horror of Dracula. This film is definitely in the upper echelon of what I have seen thus far.

The film is capably directed by Terrence Fisher who also directed The Horror of Dracula. The performances in the film are enjoyable. Interestingly enough the performances that really stand out in the film are of the two young leads: David Morse and Susan Denberg. Along with their villainous counterparts, they are the central focus of the film while the amazing character actor Peter Cushing is given a prominent supporting role. This probably made some of the theater goers feel somewhat hoodwinked if they went solely for Cushing, but the film is enjoyable enough that I can’t see anybody complaining.

The image shows a good-looking transfer in 1080p with an aspect ratio of 1.66:1. The picture quality is showcases a decent amount of specking and the film definitely shows its age. It has the same drained color look that was common in Hammer pictures, so the flesh tones are not extremely convincing. The film is not as colorful as some of the Hammer films partially because it is not as bloodthirsty as some of those either.

The film is over fifty years old, so it’s understandable that we won’t blow the lid off the place when putting this disc in the player. That said, even though British actors abound, I had no trouble understanding what was said. And that’s an accomplishment. James Bernard’s score resonates through the film as a whole. It’s clear that a lot of good work was put into this track and it shows.

Frankenstein Created Woman is classic Hammer horror. The film has a strongly told story that never becomes overly exploitative. Fans of Hammer Horror films will definitely want to add this film to their collection. Shout!Factory have provided an excellent array of supplements and the film looks and sounds pretty good. Recommended!