Frances Ha is the latest film by acclaimed director and writer Noah Baumbach. It was cowritten by Greta Gerwig who stars in the titular role. The two first worked together on the film Greenberg. Their working relationship must have been fantastic because they ended up in a romantic relationship. I have been a fan of Baumbach’s work since I was about sixteen and my big brother left me his VHS copy of his first film, Kicking and Screaming. If you have not seen that film, I highly recommend checking out the Criterion DVD. That movie was a game changer to me. I must have shown it to all of my best friends in high school. Then I did not see his name pop up again until The Squid and the Whale, which was excellent, and confirmed my suspicions that he was easily one of the best new voices working today. He went on to work with Wes Anderson on the screenplays for both The Life Aquatic and Fantastic Mr. Fox. His most recent work is easily on par with the best of his work.

Frances is a twenty seven year old dancer living in Brooklyn, New York. She is unable to hold down a relationship, a steady job, or an apartment. Her best friend Sophie moves out to move in with her boyfriend, Patch. The movie follows Frances in her normal day to day existence, as she awkwardly tries her best to get by. So, reading all of that, this movie sounds like a drama, or possibly even a melodrama. Luckily, the film is a light hearted and at times joyous comedy about growing up. The movie is incredibly funny and original and manages to surprise the audience at almost every turn. Most of the comedy in the film comes through Frances and Sophie’s relationship. Frances is basically in love with her best friend, and very possessive of her. When Sophie moves out Frances has what can best be described as separation anxiety. It isn’t overplayed and is not far fetched, which makes it incredibly funny. Frances through the course of the film seems incapable of making good decisions. This is showcased in a scene in Paris that is absolutely hysterical. They don’t miss a beat here.

One of the things that made me enjoy the movie so much is Baumbach’s love of older films. The film is shot on digital film, but was digitally altered to become a black and white film. The results are stunning, reminiscent of the look of Woody Allen’s Manhattan. There are music cues to Delarue and Truffaut, to help the viewer see the connection with French New Wave films. The movie also has the advantage of being about a very specific time and place. This movie encapsulates Brooklyn right now. One of the lines from the film basically notes that to be an artist in New York you must have rich parents. Little lines like that help to make the viewer fully understand time and place in the film. The film also benefits from a terrific ensemble cast of young talented actors, and a fantastic script.

I would be remiss to forget to mention that the soundtrack is fantastic. The jolt of hearing David Bowie’s Modern Love or Hot Chocolate’s Every 1’s A Winner blare out of my speakers was a blast.

This film looks fantastic on Blu-ray. Due to the film being completely shot on digital and a pure transfer there is no trace of any compression issues or any problems whatsoever. I really hope that more directors learn from what Noah Baumbach achieved on digital film here. Clarity and attention to detail are excellent, and the film is incredibly well shot. I was extremely pleased in this department.

This audio track is a lot of fun. Surrounds are present throughout the film and really open up during the occasional scene at a bar or restaurant, but this film is a dialogue driven film with no explosions or other nonsense. Dialogue is crystal clear and very easy to understand. The best part about this track comes down to the fantastic soundtrack featuring T. Rex, David Bowie, Paul McCartney, and Harry Nilsson. Audiophiles will be pleased to know that Criterion as per usual provided the film on a 50GB disk, so all is well in Denmark.

Frances Ha is a joy to behold. I don’t think I am over speaking to say that I consider this a generation defining film. When people look back on our time in twenty years, this will be a great reference point. Criterion delivers the goods in the audio and video department, but I would have loved a commentary track to round out the excellent but brief featurettes. If that had been included, this would be a perfect ten. 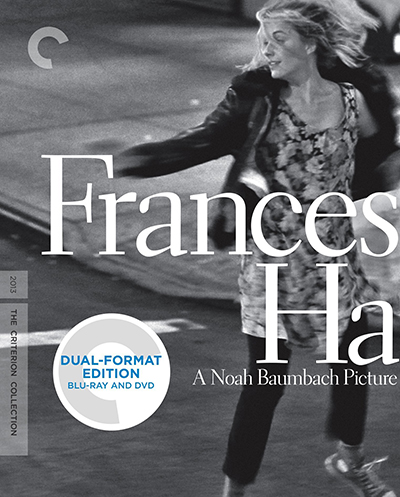