One day last week, I don’t remember precisely which one, I was driving down the road and singing – out loud – “Gettin’ Jiggy With It!” Oh yeah I was! You see, I love Will Smith. I remember groovin’ to him back in the day when he was with DJ Jazzy Jeff. I loved The Fresh Prince of Bel-Air and when he made the transition to movies, I count Bad Boys, Independence Day and Men in Black among some of my favorites. Over the years, Smith has established himself as a veritable talent with some of his career choices. Certainly he embodied boxer Muhammed Ali and has the ability to transition to comedy with notable turn in 2005’s Hitch. But the last few years haven’t been that great to Mr. Smith. Yes, The Pursuit of Happiness paired him with son (and again in 2013’s disaster After Earth) and despite playing an alcoholic superhero in Hancock, we’ve not really heard out of the former King of July. Admittedly I’d not heard a lot about Focus other than it starred Margot Robbie who I loved in The Wolf of Wall Street.  Mr. Smith, you’d better not let me down…

Smith plays Nicky, a con artist who’s taken his game to a whole new level and even made a pretty successful business out of it. By employing a group of pickpockets, they stake out large events (Mardi Gras, The Super Bowl, etc.) and take the tourists for all their worth. And it pays – big. He meets Jess (Margot Robbie) who wants to get into the game. Teaching her the tricks of the trade, the two have a spark but not before Nicky kicks her to the side (figuratively) and they part ways. As fate would have it they meet up again in a few years. Nicky is involved in another scheme, this time involving a race car driver, Garriga (Rodrigo Santoro). Jess’ presence could compromise Nicky’s plans. The payoff is huge, but can two con artists who have had a checkered past truly trust one another?

I love movies about con artists. Well, some of them. Watching this I had no idea what the movie was going to be about (I watch all trailers/features after the fact as they tend to give away plot points), but my eyes lit up when I realized the theme. I think I’ve always wanted to be a thief, but I’m afraid I’d get caught and end up in jail. Bad things happen in jail. Smith essentially plays himself – slick, calm, cool and collected. Margot Robbie is decent in her part, but she’s so breathtakingly beautiful, I really wasn’t paying attention to what she was saying. The movie was well-made and adequately acted, though I did find it on the more predictable side. Still, it shows that Will Smith is still a commodity in Hollywood and it’s good to see him back in action.

I look back at some older movies and saw how judgmental I’ve been in the past. There’s no definitive way to say “this looks good” and something else doesn’t. I just tend to call them like I see them, pardon the pun. That said, I really couldn’t find anything wrong with the visual presentation for Focus. Warner’s 1.85:1 AVC HD image is about as beautiful as it gets. And let’s face it, Will Smith and Margot Robbie aren’t exactly hard on the eyes.  The film has a certain feel to it that really resonated with me. Everything is slick. Everything looks good. Detail is amazing – everything is razor sharp.  Colors are rich and pure. If I could go back in time and grab someone and say “this is what movies will look like in 15 years” I’d be prepared for their jaw to drop. This is perfection.

While not as impressive as the visuals, the DTS HD Master Audio track has some very impressive moments. Vocals take front and center here, with rich and crisp dialogue pouring from the center channel. The front stage handles most of the mix, but one scene that really struck me was at the race track. The cars would whiz by and activate the LFE that really made an impact. That coupled with the high pitch of the car’s engine really gave a nice “thump” when they’d go by. A nice effect. There’s some ambient surround sound, but it’s a nice and often passable track. I can’t imagine the viewer being disappointed.

Warner isn’t loading down their films with supplements like they used to, but Focus comes with an array that’s more than your standard offering.

It’s no Men in Black or Independence Day. Then again it wasn’t supposed to be. I rather enjoyed Focus, though I don’t imagine I’ll be watching it again anytime soon. Smith, like Kevin Costner, is best when he plays it cool. The Blu-ray delivers reference-quality video as well as a very immersive sound mix. Couple that with a smattering of extras and while I can’t outright recommend a purchase, it’s not a bad little flick. 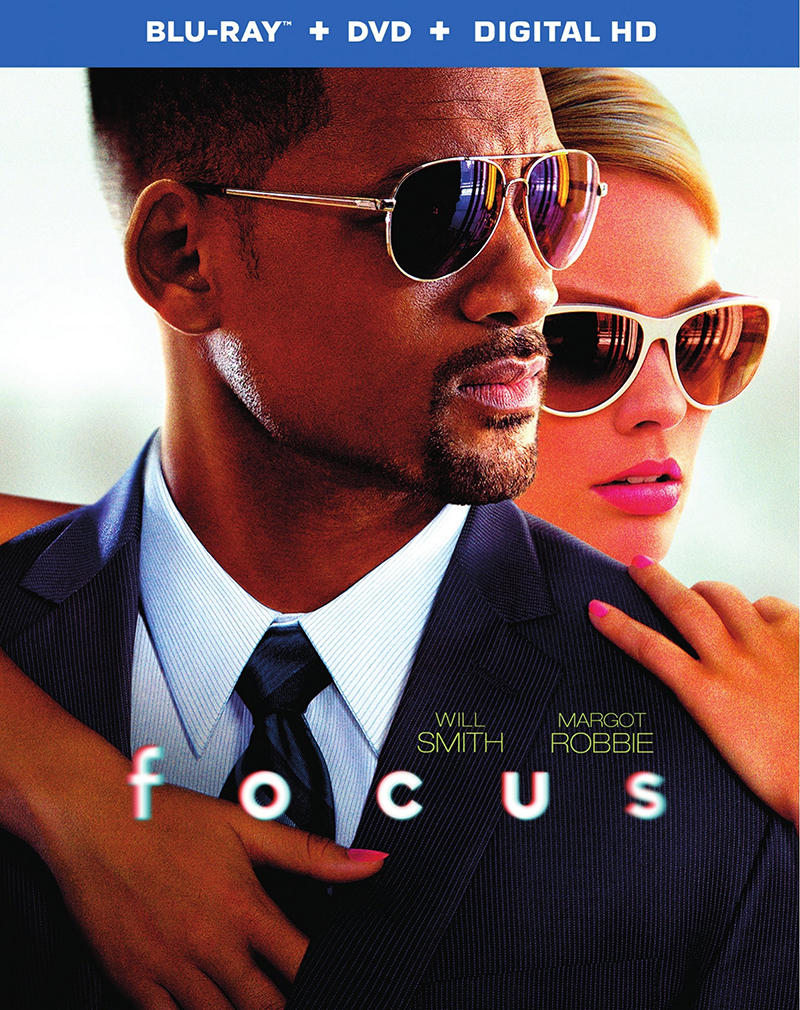