Denzel Washington is perhaps my favorite working actor.  I also lump him in with names like Robert Mitchum and James Stewart (good company to be in, for sure).  Washington has two Academy Awards to his credit, the first for Best Supporting Actor in 1989’s Glory and the other as the baddest of the bad guys in 2001’s Training Day.  He finds himself in familiar territory once again as he’s been nominated for Best Actor in Flight, the story of a pilot who literally saves the day, yet has substance abuse problems.  This begs the question: will he win?  He’s up against Daniel Day Lewis, another two time Academy Award winner and a win by either would put them into the elite category of Jack Nicholson who’s come away with the golden statue a trio of times.  It would seem that no matter what role he’s playing, however, he does well in it and to me – that’s the sign of a truly talented actor.  I might not like or agree with the characters Denzel Washington plays, but he plays them to perfection and watching him on screen is just so utterly fascinating, I get lost in the role.

That’s the case with Flight.  Washington plays Capt. Whip Whitaker, a Navy vet who’s made a career as a commercial airline pilot. Whip is a drug user and an alcoholic who sleeps with some members of his flight staff.  During a routine flight, he’s hung over though it’s nothing that a hit off a joint, a swig of beer and a few lines of coke can’t cure, right?  As fate would have it, the plane goes into a tailspin and, through an act of heroism or stupidity (or both) Whitaker manages to invert the plain and save 96 of the 102 souls on board.  Naturally there’s an investigation and it’s brought to his attention that he was under the influence of alcohol and drugs.  He, together with his friend and Union Rep., Charlie (Bruce Greenwood) and lawyer, Hugh (Don Cheadle) aim to beat the system by getting the drug charges dropped and life goes on.  This is where, pardon the pun, Flight takes off as a morality play.  We know Whip is guilty and as we see him deal with the pain and suffering through various methods, wonder if he’ll end up doing the right thing.  Are there truly consequences for our actions or are some people above the law?  There’s a sub plot about a recovering drug addict, Nicole (Kelly Reilly) though the story about Whip’s addiction takes front and center.

My parents saw Flight in theaters and raved about it, so I was looking forward to seeing Washington in action once again.  He’s been a frequent collaborator with late director Tony Scott, so to see him teamed with Academy Award winning director Robert Zemeckis was a real treat.  Zemeckis has been kind of under the radar for some time, only churning out a few notable films since Forrest Gump.  His last three have a actually been animated: A Christmas Carol, Beowulf and The Polar Express.  You have to go back to the turn of the century with Cast Away and What Lies Beneath to get his last live-action movies.  Whatever your reaction is to after seeing this film, I can guarantee that it will evoke a response and that’s the sign of a good performance and a good film in general.  I also write this as I’m set to board a plane in about 30 hours.  Am I nervous?  No.  But let’s just say that I’ll try as best I can to forget that I’d seen this movie and when.  If I’m unable to do that while on the plane, well, I think I’ll have a drink.

Flight is presented in a 2.40:1 AVC HD image that is consistent with what we’d expect a new to Blu-ray to look like.  Overall visuals are splendid with detail being amazing, the little beads of sweat on Denzel’s face towards the end of the movie look great.  Obviously there’s some CGI that looks the part, contrast and black levels are on the mark as well.  Flesh tones seem warm and well-balanced.  There are a few stock shots that are a bit soft but seeing as how they’re stock and only seen for a few seconds, I won’t dock the score that much.  On the whole, it’s a very good-looking transfer and one that the folks at Paramount are no doubt proud of.

As much as I was expecting a very robust DTS HD Master Audio soundtrack, I was kind of let down here.  Maybe I had my receiver turned down a few notches, but I just didn’t get the reaction out of the mix that I was hoping or expected.  Yes, the plane crash sequence did deliver, but the majority of the film was dialogue-driven.  Washington’s notable accent is always present, John Goodman’s cameo as a drug dealer has his voice booming across the screen and though surrounds were present they were somewhat absent if that makes sense.  By no means is this a bad mix, but I just didn’t feel it was up to par with what I was expecting.  A solid effort, though. I will end by saying that there are a few instances of Joe Cocker’s “Feelin’ Alright” that sound the best I’ve heard in any way, shape or form.

As acclaimed a film as this was, I was kind of surprised at the lack of supplements on the disc.  We’ve essentially got a trio of featurettes along with a Q & A session that’s lacking Denzel Washington.  Nevertheless we start off with “The Making of Flight” which is something we’ve all seen before.  The cast and crew are interviewed about the film, its message, creating a fictional airline and how it all went down (pardon the pun).  Moving onto “The Origins of Flight” we get some insight into the film with the cast and crew, how the script came to be (it was a conglomerate of several different instances) and how the movie finally found its way to the screen.  “Anatomy of a Plane Crash” is just that, how the crew set up the shots to crash the plane, how the different parts were used to represent the airplane and the final scene.  Lastly we’ve got a “Q & A Session” minus Denzel Washington, with LA Times John Horn as he interviews the cast and crew of the film.  The second disc contains a Digital Copy and a UV copy of the film. 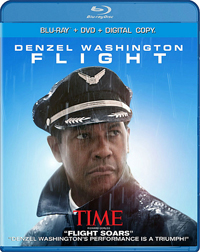