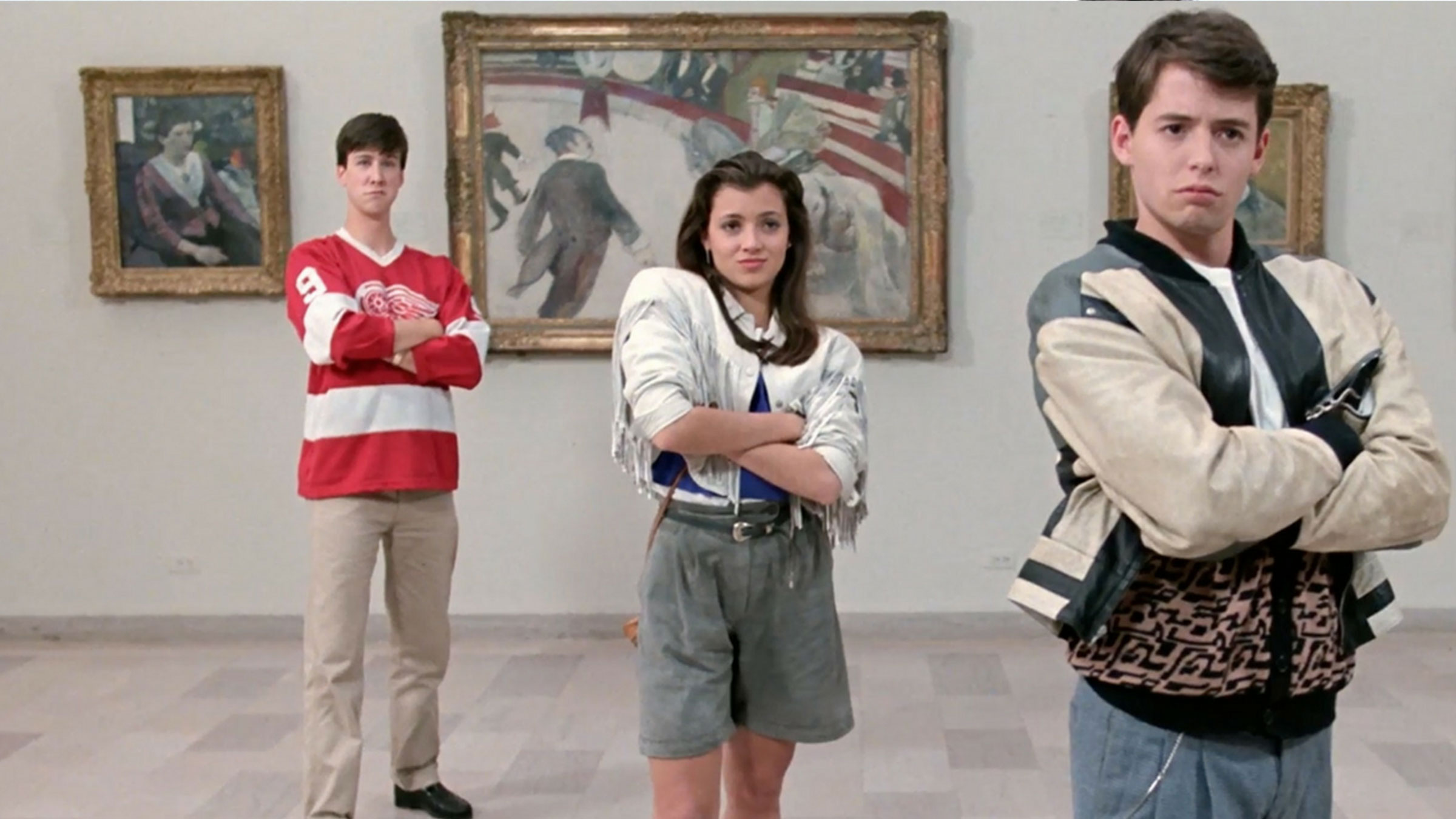 It might be said that the films of John Hughes were some of the most memorable of that decade known as the 80’s. If you were alive back then, let’s face it – only a few films really stand out as memorable. “Raiders of the Lost Arc”, “E.T.” and maybe “The Breakfast Club” are some that come to my mind. Hughes is best-known for his trio of “The Breakfast Club”, “Sixteen Candles” and “Weird Science”. But an unofficial fourth to that trio would have to be “Ferris Bueller’s Day Off”, a film that really established Matthew Broderick as a star and gave high school students something to really aim for when they skipped school.

For those that don’t know, the plot is painstakingly simple and it might be said that the title says it all. Ferris (Matthew Broderick) has nine sick days and figures he needs to make his last one of the year really worth something. He convinces his parents that he’s ill but his charade doesn’t get past his sister (Erin Grey). We watch Ferris as he convinces his best friend, Cameron (Alan Ruck), steals his dad’s car and away they go to baseball games, art museums and fancy French restaurants. Of course, this really wouldn’t be a classic if we didn’t have the high school principal (Jeffrey Jones) hot on his trail. Always one step behind, Principal Rooney manages to miss Ferris and friends. Will Ferris have the day of his life, marry his girlfriend and get Cameron out of his perpetual funk or will Principal Rooney make his greatest catch ever?

Seeing this movie in the theater, I loved it. I was in Junior High at the time, but nearly twenty five years later this movie does hold a special place in my heart as I’m sure it does for everyone who’s seen it. This is, perhaps, the ultimate teen movie for the past generation and not many come close to it’s success as an immediate cult classic. “Ferris Bueller’s Day Off” showed that, like Hughes’ other films, kids are capable of a lot more than we give them credit for and how to turn a lovely spring day in Chicago into one of the best days of your life.

This would have been a great opportunity to give the film a new transfer and even include it in Paramount’s “Classics” collection. But, no, Ferris Bueller’s Day Off has the same 2.35:1 AVC HD transfer as in previous Blu-ray releases. That said, I was pretty impressed with the visual effort. Paramount usually does a fair job with their catalog titles and this is no exception. The colors are bright and have a “pop” that really ignites the transfer. Detail is solid, giving it an edge (pun clearly intended) over the previous DVD and laserdisc transfers. A few of the scenes seem a bit shallow and I noticed a bit of grain on some of the scenes.

Likewise, the same Dolby TrueHD soundtrack is included here, thus replacing the 5.1 soundtrack on the standard DVD. This film hasn’t ever been that heavy on the audio, but there are a few moments in which is does shine. The “Twist and Shout” sequence sounds great as does the jazzy ensemble when Ferris is running home trying to beat his parents to the house. Dialogue is very clean and while not that active, surrounds are active from time to time. Like the video, the audio sounds solid but fans probably won’t mind if this doesn’t shake the room.

As we might expect, no new supplements have been included. What we get is what’s been available for more than a decade.

It’s kind of puzzling. On one hand, Paramount has shown us that they can take their extensive catalog, give them new transfers and audio mixes and even throw in some new supplements. On the other, this isn’t one of those titles and it’s essentially a lazy effort to cash in on what they think they can sell again. This is the exact same Blu-ray as what’s been available since 2011. If you’re a fan of Steelbooks, then I guess you could pick it up. If not, and this is already a part of your collection – there’s no need to pick this up.