Crysta (voiced by Samantha Mathis) is a tree fairy with a curious nature, so even the lush, wondrous world of FernGully can’t contain her imagination. FernGully is a tropical paradise though, loaded with trees, plants, and inhabitants of all kinds, but of course, Crysta wants to explore beyond even all of that. Her friends try to convince her to remain inside FernGully, but she ignores them and heads off into the world, where she encounters Zak (voiced by Jonathan Ward). Zak is a human who seems like a good person, but his job involves tearing down the rainforest around the area, which means FernGully could be in serious trouble. She soon manages to shrink Zak down to her size by mistake, which begins a chain of events that will change the fate of FernGully forever. Once Zak discovers what his work has caused and can still cause, he decides to protect the rainforests instead, starting with FernGully. So Zak joins forces with Crysta, her radar impaired friend Batty (voiced by Robin Williams), and some others, but even with their combined forces, can they overcome the evil Hexxus (voiced by Tim Curry)?

Although Disney ruled the world of animated features when FernGully was released, it still found an audience and has become a popular home video selection. It might not have the shine & polish of some of Disney’s more refined efforts, but FernGully sports some good animation and music, as well as solid voice talents. The characters are brought to life by such stars as Robin Williams, Christian Slater, Cheech Marin, Tim Curry, and Samantha Mathis, plus additional workers and on the whole, the voice work is terrific. The music and songs aren’t excellent per se, but they’re still adequate and some are quite memorable, so kids should fun with them and adults won’t be annoyed with the tunes. I had some doubts about FernGully at the time, as it makes no bones about packing a message about the treatment of the environment, but I think it is delivered in fine fashion, just enough push, never too much. So yes, we understand what the filmmakers want to say with FernGully, but they never cram it down our throats and as such, the film itself remains entertaining and worthwhile, as it should. So if you’re a fan of the film or just want to add a new animated feature to your collection, FernGully is a wise choice.

FerGully: The Last Rainforest is presented in 1.85:1 widescreen. The image looks a little dated and soft at times, but this is hands down the best home video presentation the film has been given. This is a large improvement over the DVD version, with much more fine detail visible within the animation. The backgrounds seem to spring to life with added depth I was unable to see in previous incarnations. The colors look bright, but don’t pop off the screen like I hoped, while contrast is stark and very consistent at all times. So all in all, the film looks quite good here and an upgrade is recommended to best enjoy the film’s visuals.

A DTS HD 5.1 soundtrack is included and sounds good, but not quite great. The surrounds are used to pump life into the music and otherwise, presence is limited to the front channels in most scenes. The film still sounds good however, as the track is clear and no errors surface. The dialogue is crisp and no volume issues or harshness concerns pop up at all. So I wasn’t all that dazzled here, but the movie’s audio needs are satisfied.

As far as extras, a very informative commentary session starts us off, with a focus on the technical aspects of the production. So if you want to learn about the nuts & bolts of animation, this session should delight you. This disc also includes some television spots, three brief promotional featurettes, a music video, and the film’s theatrical trailer. 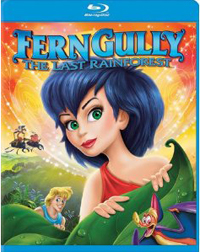