Directed and written by Anne Bancroft, the seriocomic film Fatso arrives on Blu-ray as part of Shout’s “Select” line. This is a great choice for the label which focuses on stellar releases of under appreciated or overlooked films with a devoted following. Starring Dom DeLuise, Fatso is essentially a story about one man’s love for food and for a woman. In both senses, it is a love story. I sat down last night and watched the film. I was happy to find that I really enjoyed it.

From birth, Dominic DiNapoli (Dom DeLuise) has coped with the troubles in his life by gorging on food. Dominic grows up in a strong Italian Catholic family and his mother feeds him to calm him down. After the opening credits establish Dom’s love of food from a young, the film cuts to a funeral. Dominic’s cousin, who helped inspire his love of sweets, Sal, has passed away from being overweight. At the funeral, Dom’s sister Antoinette (Anne Bancroft) breaks down and cries over the foolishness of him dying from something so senseless. She lets Dominic know that she has made a doctor’s appointment for him. Dom lives with his brother Frankie (Ron Carey) and they get into arguments over Dom’s numerous attempts to overfeed his brother bread and jelly. Dominic runs a gift card store with Antoinette. In an effort to appease his sister and the doctors, Dom begins to participate in crash diets and other weight loss programs which make him miserable including a group called the Chubby Checkers. He also begins to develop an interest in the girl that works next to his shop named Lydia (Candace Azzara.) Unbelievably, Lydia sees through his faults and begins to fall for him.  As their relationship develops, Dom finds it easier to resist gorging on foods.

Anne Bancroft was married to Mel Brooks and his sense of humor definitely rubbed off on her. The movie is very funny and honestly is really well written. Anne Bancroft gives a fiery performance as Dom’s hysterical sister, proving that she was able to wear three hats at once. What makes the film so enjoyable is that Anne Bancroft infused her Italian heritage (her birth name was Anna Maria Louise Italiano,) her Catholic upbringing, and her growing up in the Bronx into the screenplay which gives it a loving authenticity. Fans of the film Marty starring Ernest Borgnine will find themselves right at home watching Fatso, thanks to the sweet natured love story between Dom and Lydia.

Dom DeLuise really proves his range in this film. He is as funny as he is touching. It really goes to show that he had some dramatic talent that wasn’t tapped by other directors. Mel Brooks was always a genius at using him for comic relief, but Dom proves here that he could have played more serious roles. In the film, his character is an emotional wreck and he cries as often as he laughs. It is a performance that would be a balancing act for any well trained actor, and he nails it. I am not kidding when I say that Dom DeLuise’s performance in this movie is one of the better performances that I have seen recently.

There are numerous great scenes in the film. A scene where he reads birthday cards emotionally is particularly funny and so is the scene in which he locks up his fridge and gives the keys to his brother. The movie got same great laughs out of me.

Shout!Factory has provided a good looking transfer in 1080p with an aspect ratio of 1.85:1. Don’t judge the film by its opening scenes which are shot with a hazy filter. The transfer is good. Fine detail is solid and the color and contrast are both nice. There is a fine level of grain. There is some light specking but it is not pervasive. The cinematography by Brianne Murphy is pretty good looking – especially the exterior scenes on the streets of New York.

Shout has provided a DTS-HD MA 2.0 Mono track. The sound quality is pretty darn good. Dialogue is clear. The score by Joe Renzetti fits the film well with its Italian motifs. The film sounds good and I did not detect any signs of hiss or distortion.

Fatso is a surprisingly good film considering it was the sole directing and writing job that actress Anne Bancroft undertook in her career. Dom DeLuise is tremendous in the lead role. I am giving the film particularly high marks as I must say that this was one of the better surprises I have had this year. Shout!Factory has provided some interesting supplements including a very sweet reminiscence by Anne’s husband Mel Brooks. I highly recommend checking this film out! 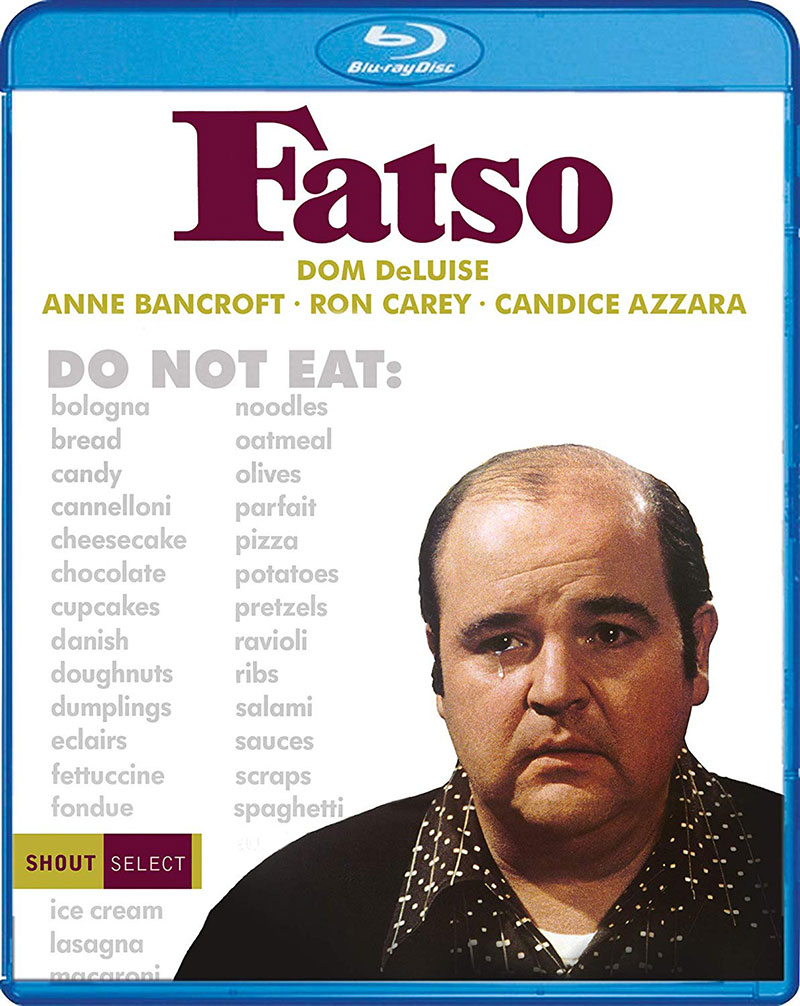