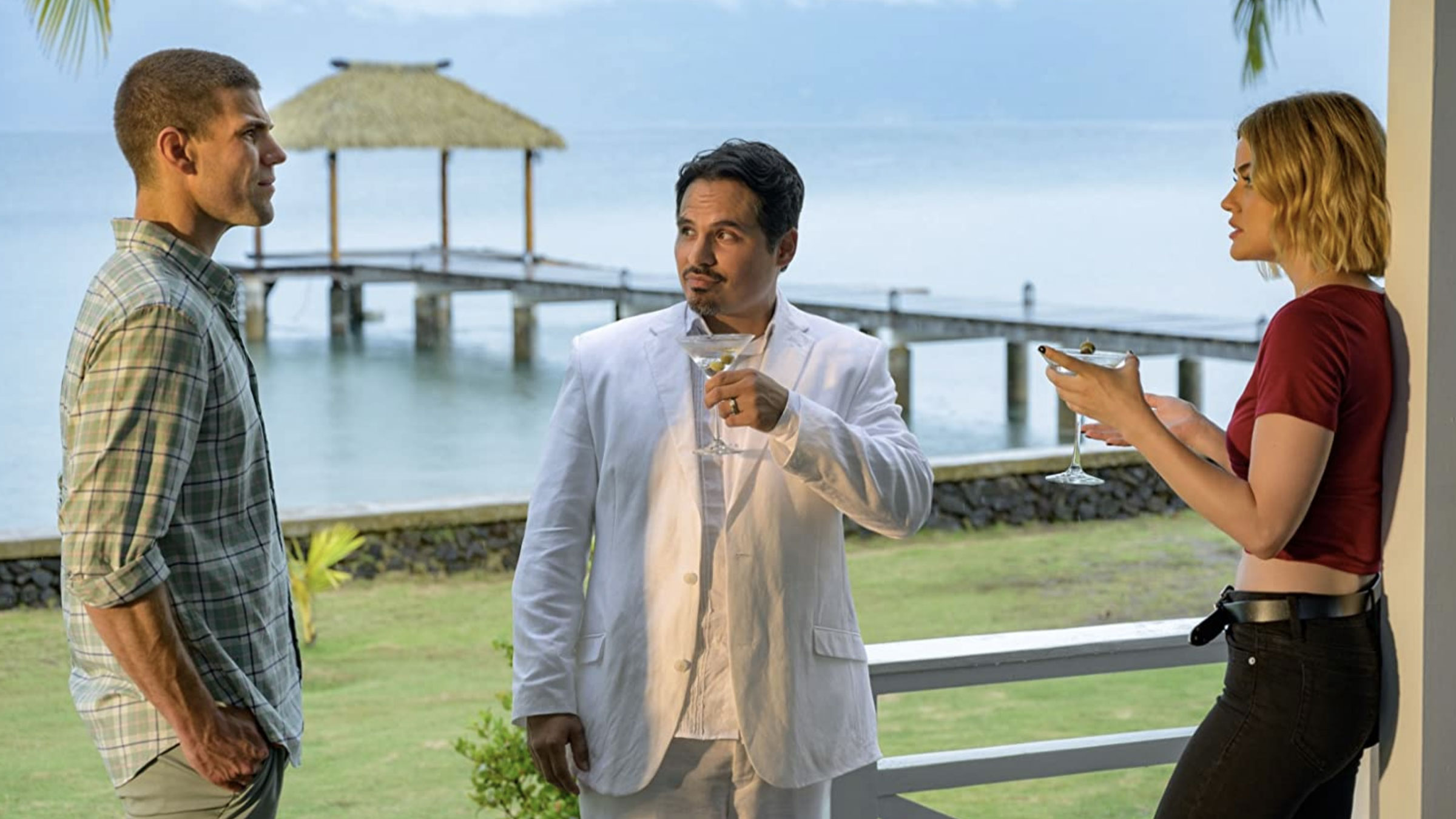 Just when it seemed that every television show from the 60’s, 70’s and 80’s had been rebooted into a feature-length film, we’ve got Fantasy Island. The show ran from 1977-1984 and I remember watching and liking it. The top level view was that each week a slew of people would come to the island for some personal reason. They’d live out their respective fantasies ultimately learning something moral about their lives along the way (coping with the death of a loved one, etc.). The island was run by Mr. Roarke (played impeccably by Ricardo Montalban) and his sidekick, Tattoo (Hervé Villechaize). A lot of that is still intact in the new film, but we’ve got a darker spin on it.

The above premise is also the plot for the film. A group of strangers arrive on a beautiful island and are welcomed by Mr. Roarke (Michael Peña) who promises each will have a fantasy fulfilled. The hook is that they have to let that fantasy play out regardless if they like the way it’s going or not. We meet Patrick (Austin Stowell), hoping to have the military career he never had. Gwen (Maggie Q) wants to live a certain life event over. Melanie (Lucy Hale) wants revenge on a girl from high school. And finally “brothers” JD (Ryan Hansen) and Brax (Jimmy O. Yang) essentially just want it all. Things start out fine, but as Mr. Roarke warned, things start to go awry. “Be careful what you wish for” might be the main takeaway from this one.

There’s a bit more to the film than above, but that’s really all one needs to know. And, to be sure, there are elements of other (and better) horror films at work here. I’m reminded of some of the Saw films, certainly Cabin in the Woods is an influence and I even picked up on a bit of the TV show Lost. The film was directed by Jeff Wadlow who also helmed Kick-Ass 2 and Truth or Dare (stars from those films are in play here as well) so certain elements to creep into Fantasy Island as well. And given the film’s PG-13 rating, this isn’t some gross, over the top film that glorifies violence. Yes, there is some, but it’s done in a more toned down way. I won’t say this is one for the family, but it made the viewing experience a bit more palatable. If the bar is set low, I think a better time will be had.

Shot on location in Fiji, there’s no shortage of beauty in the film. The 2.39:1 AVC HD encode showcases the crystal blue waters (and sky) along with some of the rugged, natural terrain featured in the film. It also showcases Michael Rooker’s character who looks like he’s been living in a cave for the past few years. So, take the good with the bad is what I’m saying. Colors leap off the screen, the flesh tones are a bit on the saturated side with everyone looking tan and glam. But with a title like Fantasy Island, it’s got to have a certain visual style, no? Contrast is strong, black levels solid. This gets an A+.

The included DTS HD Master Audio sound mix has a few moments, but it’s really nothing to get to excited about. There are a few gunshots, but I’ve heard better from comedies. A grenade or two go off as well that don’t really make much of an (audio) impact. Vocals, the centerpiece of the film, do sound crisp and natural. By and large, the audio is a front-heavy mix that seems to get the job done. There’s not much else to say, it’s a perfectly serviceable track that delivers, but nothing mind-blowingly good.

Call me crazy, but I actually liked Fantasy Island. Then again I went in with the lowest of expectations. I you check your mind at the door, which is never too challenging for me, then I think it’ll be a good experience. The disc looks and sounds great and don’t forget those extra 16 seconds are waiting for you in the unrated cut. Yay!