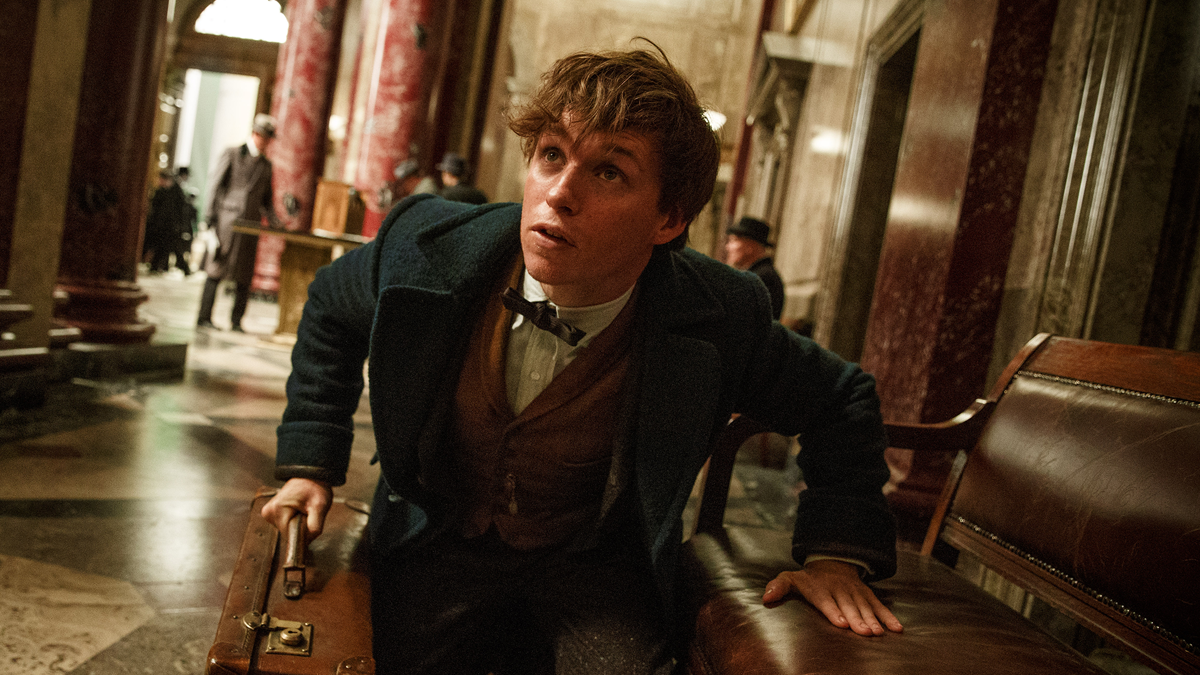 Oh come on! You didn’t think it was over, did you? Of course not. As of this writing it’s been nearly 5 years since the end of the Harry Potter films. I won’t divulge what happened, but suffice it to say that if you don’t know that I’m envious of you for being able to avoid that information. On November 16, 2001 Harry Potter and the Sorcerer’s Stone was released in the United States and audiences loved it. This was the first in what was to be eight films that chronicled the story of a young wizard who would go to toe to toe with the biggest and baddest of them all. I won’t recap the Harry Potter series as I’m certain that anyone reading this already knows about it. Flash forward a decade and a half and now we’ve got a somewhat “new” chapter in this universe with Fantastic Beasts and Where to Find Them. Does the title sound familiar? It should. It was the name of a textbook assigned to Harry in his first year at Hogwarts. With the Potter series complete, the folks at Warner were hungry for something else. With no more movies means no more money. What to do? Enter J.K. Rowling, who jumped at the chance to create this new world, one that preceded the one we know by a few generations. Sure, some of the names are familiar, but the story wasn’t. There are five of these movies planned and judging by the worldwide box office (nearly a billion dollars), odds are we’ll see them in the next few years. Let’s start the journey over!

Beasts is the same, yet different than its predecessor. Set in New York City in the 1920’s, it’s 60 years before Harry Potter is born. We meet Newt Scamander (Eddie Redmayne), an English wizard and field researcher in magical creatures. He’s arrived with suitcase in tow (more on that later) and is heading out west to release one of these “magical creatures” into the wild. But things never go as planned, and Newt’s magical briefcase springs a leak (of sorts) and he’s got to retrieve some of the creatures that he’s already captured. Think of it as a Harry Potter version of Pokémon. Newt’s not alone in his quest, there are wizards in America too and he happens upon a few of them who help out. An auror, Porpentina Goldstein (Katherine Waterston) along with her mind-reading sister (Alison Sudol) and Kowalksi, a “muggle” who has inadvertently become entangled with them (Dan Fogler). Soon these glorified dogcatchers have more important things on their minds than stray murtlaps and invisible demiguises, as another, more somber story line coalesces and takes over. That one involves Percival Graves (Colin Farrell), a shadowy colleague of Porpentina’s from the law enforcement agency MACUSA (Magical Congress of the United States of America) and a mysteriously intense young man (Ezra Miller) who has been adopted by an anti-wizard crusader (Samantha Morton).

Yes, there’s a lot happening in this movie, as well it should. This is setting the tone for the next quartet (or quintet if Warner decides to split the last movie in two parts) of films and this will lead into a very interesting area of Potter lore. I won’t expand, but it’s easily searchable on the friendly internet. The bar was set pretty low for this new film, after all what could compete with Harry Potter? As it turns out, I rather enjoyed this film and its ensemble of characters which is good – we’ll be seeing plenty of Newt in forthcoming films, for sure. No doubt the legions of fans will (and have) gobbled this up and are looking forward to more installments. Warner must be happy as well, as this will pad their bank account for the next several years. It’s a win all around.

There are four different ways to “experience” this film: DVD, Blu-ray, 3D Blu-ray and Ultra HD/4K. I was sent the Ultra HD version and that’s probably the way I’d prefer to see all of these films. As much as I’d like to see magical creatures flying off my screen, I think it’d get old after a while. That said, the 2.39:1 HEVC image is simply stunning. The detail is what really got me. The Potter universe is full of things that aren’t commonplace, but the texture on the fur of some of the creatures, the little sparkles and even the beams of “light” emanating from the wands is unlike anything I’ve seen. The color palette is a bit on the muted side, taking place in New York, but the darks are pitch black. The HDR is, well, fantastic. I find it hard for words to do this justice, but no matter which format you watch this in I’m sure you’ll be amply satisfied.

Warner hasn’t been the most fervent supporter of next generation audio formats, but thankfully this Dolby Atmos presentation has restored some of my faith! Oddly, this is being released with the last four Potter films, all of which been upgraded to a DTS X sound mix. I find that odd. Moving on…the audio is simply one of the crown jewels of Warner’s 4K releases. There are so many little intricacies that I get confused just thinking about them. The sound when the characters apparate, even the sound of footsteps sound better! The entire atmosphere of the movie is second to none with the surrounds seemingly constantly outputting some ambiance. The LFE get a workout as well. Don’t worry, the included Dolby TrueHD mix is nearly as good and Warner has even provided a DTS HD Master Audio mix for good measure. Again, no matter which mix you pick – it’s a win.

I’d gone through my Potter withdrawal a few years ago, but I have to admit that this is the start of something new. With no antecedent to go on, I’m willing to bet that others are as excited as me to follow Newt through the next decade or so. It might even pave the way to go the other way (like Star Wars) and they could even do more movies leading up to the birth of Harry. But I’m getting ahead of myself. Fantastic Beasts and Where to Find Them lives in the same world as Harry, Ron and Hermione, but it’s got its own flavor. The disc sports reference-quality picture and sound, so those who take the plunge will be rewarded.