Having never been a huge Ridley Scott fan, I can’t say I was particularly looking forward to Exodus: Gods and Kings. I’ve enjoyed some of his films mildly, but I question some of his stylistic choices as well as other things. Not to mention that most of his films run far too long. The same can be said of his late brother, Tony Scott’s work. So, that and the fact that I’m not very into biblical films only aided my initial hesitations with Exodus. Christian Bale plays Moses in the film, and while I thought he did a passable job, his performance didn’t blow me away, either. I’m sure there would’ve been complaints no matter who was cast as Moses anyhow. Most of us know the story of Moses and the plagues, but there are sure to be religious scholars who are angered in this retelling. I think if you put religion and Hollywood in the same sentence then complaints of this nature become inevitable. The same thing can be said of Hollywood’s treatment of fact-based films as well as historical ones. Since I’ve never been a religious person, I can’t say any of the decisions made in this film angered me in that regard, nor does it alter how much enjoyment I can get from a film of this sort. In truth: I found the film far more entertaining than I would’ve expected. With that being said, I still didn’t love it, but it wasn’t the epic failure I feared it would be.

Outside of Bale in the lead role, we also get a strong performance from Joel Edgerton as Ramses. One has to wonder how he might’ve handled the role of Moses. There’s no shortage of great actors here. John Turturro, Aaron Paul, Ben Kingsley and even Sigourney Weaver, to name a few. Despite the limited PG-13 rating, the battle scenes are still quite intense. The CGI was very convincing as well. I wonder what the results might’ve been like had Scott let loose and went for an R rating. My biggest gripe is with the film’s pacing. Too often it’s a bit of stop and go. Just as it seems the momentum is building, the film keeps holding back and slowing down. It also lacks the big, epic feel it seemed to want. Films like this should be big in more ways than just the effects. I was entertained while watching the film, but it didn’t leave me with anything. It failed to resonate with me. While my feelings on the film are mixed, I can say that It was far better than such recent biblical films such as Noah. I have to wonder how another director might’ve handled this material. Scott has certainly had his share of films of this nature, but I don’t always agree with his choices. I’m sure we’ll get an extended cut of the film somewhere down the road as is often the case with many of his films. Still, this will have to do for now. Even if an extended cut is released, the results might not be much better. After all, Oliver Stone released several cuts of Alexander, and the results were still not good.

Say what you will about the film itself, but Ridley Scott has created some breathtaking visuals in this film. Scott’s always had a good eye and it’s showcased in this beautiful 2.40:1 AVC HD image. Even looking at the cover itself, one can tell the scale of the film. Granted this might not be like such other biblical epics like The Ten Commandments or The Bible, but with modern day advances in film-making coupled with the natural talent that Scott has – it’s quite the visual experience. Having said that, the film isn’t perfect, but it’s pretty darn close. Detail shows fine texture in both close up and sweeping shots. Dirt on the faces of the slaves, individual matted hairs and the intricate definition in some of the costumes. Black levels are solid as is contrast. This is a film that’s meant to be seen on the biggest screen imaginable.

If the opening battle sequence isn’t the epitome of reference-quality audio then I really don’t know what is. This movie is just all about the sound from beginning to end. The DTS HD Master Audio mix is superb, bringing the highs and lows together in a mix that’s one for the ages. Vocals are rich and pure, crisp and clean. Bale’s gritty voice carries across the soundstage with the utmost clarity. Of course the LFE have plenty of room to flex their muscle, the fronts are busy with “thuds” and “thumps” and every surround channel you own will earn its keep during this 150 aural experience. Suffice it to say that this one is one that’s best when you crank it up a notch or two.

While not jam-packed with supplements, there are a few that are pretty interesting.

Neither the disaster nor the powerful epic many might’ve expected and/or feared. Exodus: Gods and Kings is a decent enough way to pass the time, but it’s never anything more than that. 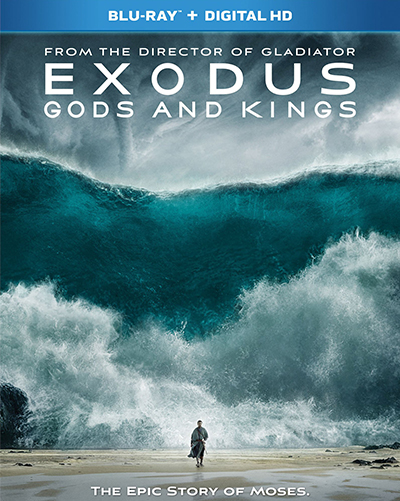