Oh Hollywood, will you ever learn?  Why, oh why must you re-make every single film that’s ever been a success?  In truth, some are better than others and maybe I do get a bit of a kick out of saying “hmmm, that wasn’t like that in the original.” Still, it seems that this ever-increasing trend is either really taking off, it’s always been around or maybe I’ve just let it bother me.  Or, and I just thought of this, maybe it’s always been this way and I’m now old enough where I can remember the original versions of films? I’m putting too much thought into this, I do think.  Switching gears, looking back at the original Evil Dead, it pretty much epitomizes what a “cult classic” is.  It helped launch the careers of both Sam Raimi (who wrote and directed it) as well as Bruce Campbell and both of these men served as producers on this re-make. And maybe it’s just me, but I’ve never found any of the Evil Dead films to be scary in the least.  Funny? Yes.  Gory? Yes. Scary? No.  Still, we’ve got a new generation of actors trying their darnedest to make a career and they’ve been dealt a winning hand with this film.  How does it compare to the original?  Let us find out.

Those familiar with the plot of the original will be right at home here, the only difference is that there’s no character named Ash as they wanted to preserve that bit of history.  We meet five twenty-somethings as they’ve met at a cabin in the woods.  Mia (Jane Levy) is a recovering addict who needs the care and support of her friends. But as her withdrawal starts to hit, she wanders out into the woods where she’s “attacked” and seemingly possessed by an unnatural force. To make matters worse, Eric (Lou Taylor Pucci) has found a mysterious book that we know to be “The Book of the Dead” and unwittingly unleashes dormant demons from the forest.  To say all hell breaks loose is somewhat of an understatement as Mia informs them that they’ll all die and, sure enough, arms are severed, heads are bashed in with toilets and people are skewered with nail guns.  We know that at least one of them has to make it out alive so they can do a sequel, but who will it be?

In truth, I actually did like this re-make of Evil Dead, but to me (and many others) there’ll never be a replacement for the original.  The camp value, Bruce Campbell’s iconic character and the sheer camp value of it all.  Directed by Fede Alvarez, who was discovered after he released a short on the internet, there’s certainly some homage to the original.  We get the fast motion camera through the woods (to suggest that the demons are approaching) and some little things here and there. Ironically enough, the movie Cabin in the Woods came out last year that pitted a group of teens in nearly the exact same situations, though it was handled in a much different (and perhaps better?) way.  But movies are meant to be entertaining and I’d be remiss if I said that I wasn’t entertained.  It’s hard not to laugh when someone cuts off their own “possessed” hand with an electric knife or maybe I’ve seen one too many horror films.  For fans of the original, they’ll like but not love it and for everyone else, it’s 90 minutes out of your life in which you’ll be entertained.

Sony’s 2.39:1 AVC HD transfer for Evil Dead embodies what we’d expect from a new to Blu-ray film.  Granted, the entire movie is dark and the majority of it takes place inside a dark and creepy cabin, but the image is rarely compromised.  Black levels are rock solid, though I noticed just the tiniest bit of some crush in a couple of scenes.  As we might imagine, there’s a plethora of red in the film so when someone is vomiting blood on another, we see it in the utmost clarity.  Awesome!  Detail is second to none, we see every hair, cut, scrape and blood vessel in full HD clarity.  There’s not a whole lot to complain about here, it delivers.

I sat down and turned my receiver up a few notches and literally said out loud “Let’s turn this one up.” And I was expecting a pretty decent sound mix that would fill my living room with the sounds of terror and horror.  Yeah, I need help.  But, for some reason, the DTS HD Master Audio soundtrack sounded good, but not great.  Though the surrounds are particularly active in this film, there just didn’t seem to be a lot of depth to the mix.  I just felt like it was missing something.  By no means is weak, it’s just not as loud and uncompressed as I thought it would be.  Or maybe I need to check my speaker configuration?  Vocals are clear and crisp and when a possessed female says “You’re all going to die tonight.” I have to admit, I paid attention.

Sony knows that there’s a built in fan base with this title, so they’re loaded it down with a good share of supplements, but they’re really lacking in substance. The Blu-ray version is treated to a few more exclusives than its DVD counterpart, but we’ll cover everything here.  We start off with “Making Life Difficult” as we’re shown some of the preparations that it took to make the film and the grueling shoot that followed.  “Directing the Dead” gives us a look at director Fede Alvarez, how he was found and what his plans were to take on this iconic film.  We’re treated to a video diary of sorts in “Being Mia” as Jane Levy takes us through her various stages of makeup and the hell that ensued on a daily basis.  Moving onto the Blu-ray exclusives, we get a cast and crew commentary track that’s actually pretty engaging.  The inspirations for the plot are told, little tidbits here and there and everything in between.  A good listen.  “Unleashing the Evil Force” shows us the literal design of the “Book of the Dead” that is the catalyst for any and all things evil in the film.  Wrapping it up we get an EPK “Evil Dead the Reboot” as we get some interviews with Bruce Campbell and some other key members of the film.  An UltraViolet copy is also included as are some trailers for other Sony titles. 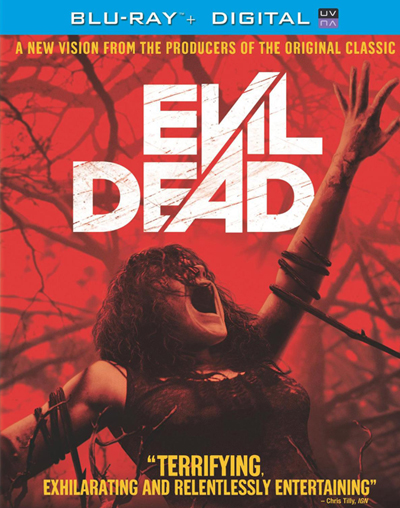