When Ella (Anne Hathaway) was just an infant, her fairy godmother (Vivica A. Fox) gave her a special gift. Not a crib or some toys or some normal present, instead she was given the gift of obedience. So whenever she was told to do something, she was forced to follow the order, no matter what was demanded. Even if she wasn’t tired, she would have to sleep if told, or to be quiet even if she wanted to shout her lungs out. No one was told of her gift, for concerns that she would be used by those with ill intentions. As she grew up however, she often found herself doing things she didn’t wish to do, often by mistake. When her mother died, she was left in the care of her father and soon, he remarried. Not for love, but for money and Ella’s new family wasn’t just bad, they were downright terrible. The secret of Ella’s gift is soon discovered by her snotty stepsisters, who boss her around all the time. Even when a young prince takes an interest in Ella, her gift complicates the situation and she falls on her face. In order to escape her gift, she runs off to find her fairy godmother, wherever she is. As she travels, she learns about the plight of ogres, elves, and others, plus she meets a lot of new friends. But when she is ordered to murder the love of her life, can she finally break the curse of obedience?

This looks like a Disney movie, even plays like a Disney movie, but don’t be fooled, this is a Miramax movie. The previews make it seem like this is an almost sequel to The Princess Diaries, plus Anne Hathaway’s presence makes us assume that Disney is involved, but without question, this is not a Mouse House production. In truth, Ella Enchanted plays like a feminist fairy tale with politically correct tones, as if to ensure no one would be offended. Kind of lame to be sure, especially when done with such obvious push. I have no problem with a social message, but use it to bolster the story, not the other way around. But even if taken as a brisk, family friendly motion picture, Ella falls short of expectations. The film has some good moments, but tries too hard to be a live action Shrek and that dooms the movie. Hathaway is fun to watch, as always, but her character is rather thin and she has little to work with. The lead isn’t always easy to like, as she has a bad attitude and is inconsistent with her mindsets. In other words, Miramax has failed with a project that Disney could have hit a grand slam with. I wouldn’t say Ella Enchanted is a total waste, but it could have been so much better, in the hands of another studio. Even so, a rental is justified for those interested, though a purchase would be ill advised.

She might not be as well known as Hilary Duff or Mandy Moore, but Anne Hathaway has quite an impressive resume. She broke into stardom just a few films before Ella Enchanted, but she has several box office hits and turned in all solid performances. In this movie, Hathaway has the perfect mixture of sweetness, firmness, and goofiness to make the role work, which not a lot of actors her age could accomplish. She handles the comic demands with ease, while her good looks and sweet presence allow her to be effective in romance driven scenes as well. Of course, she isn’t asked to do that much in Ella Enchanted, so perhaps we shouldn’t use this as a yardstick by which to measure her true talent. But in the world of family friendly cinema, Hathaway is one of the best and consistent young talents. She seems to be taking some more adult aimed roles down the line, so time will tell if Hathaway can maintain her star status. Other films with Hathaway include The Princess Diaries, Brokeback Mountain, The Other Side of Heaven, and Nicholas Nickleby. The cast also includes Cary Elwes (Kiss the Girls, The Princess Bride), Minnie Driver (Beautiful, Circle of Friends), and Hugh Dancy (Black Hawk Down, King Arthur).

The 1.78:1 AVC HD transfer looks surprisingly good and granted the movie is just eight years old, but some of these Miramax offerings from former Disney titles have failed to impress.  That said, the overall look and feel of the movie is very glossy – a “film like” quality if you will.  Flesh tones seem warm and natural with detail showcasing some of the more “interesting” aspects of the film.  Contrast is spot on as are black levels.  I found a few scenes with a slight bit of grain associated, but they’re few and far between. Having never seen the film before, I was pretty impressed with this Blu-ray release.

The DTS HD Master Audio soundtrack doesn’t really disappoint, either.  Admittedly I had no idea as to what to expect with this film, so I can say that I was pleased with how this sounded.  Vocals are at the heart of this movie and they sound rich and vibrant.  Surrounds are there…sort of, but they do come into play here and there.  I think they were probably intentionally held back during some of the scenes.  That or I need new surround speakers.  By and large it’s a great mix and one that’s sure to please.

As is the case with most, if not all, of the Miramax titles released by Lionsgate, we find the same supplements that appeared on the DVD from several years back.  First up is the commentary with director Tommy O’Haver and he’s joined by actors Anne Hathaway and Hugh Dancy.  It’s a nice track and fun to listen to.  There are some deleted and extended scenes as well as a music video “It’s Not Just Make Believe” by Kari Kimmel.  We also get a red carpet special feature along with an EPK “The Magical World of Ella Enchanted”  The second disc is a DVD of the movie with the same supplements and we get a few DVD-ROM (yes, DVD-ROM) features: Happily Ever After  and Prince Charmont’s Fan Club set top game.  I’m not sure when the last time DVD-ROM was actually used, but there you have it! 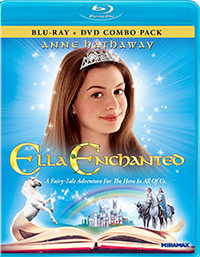