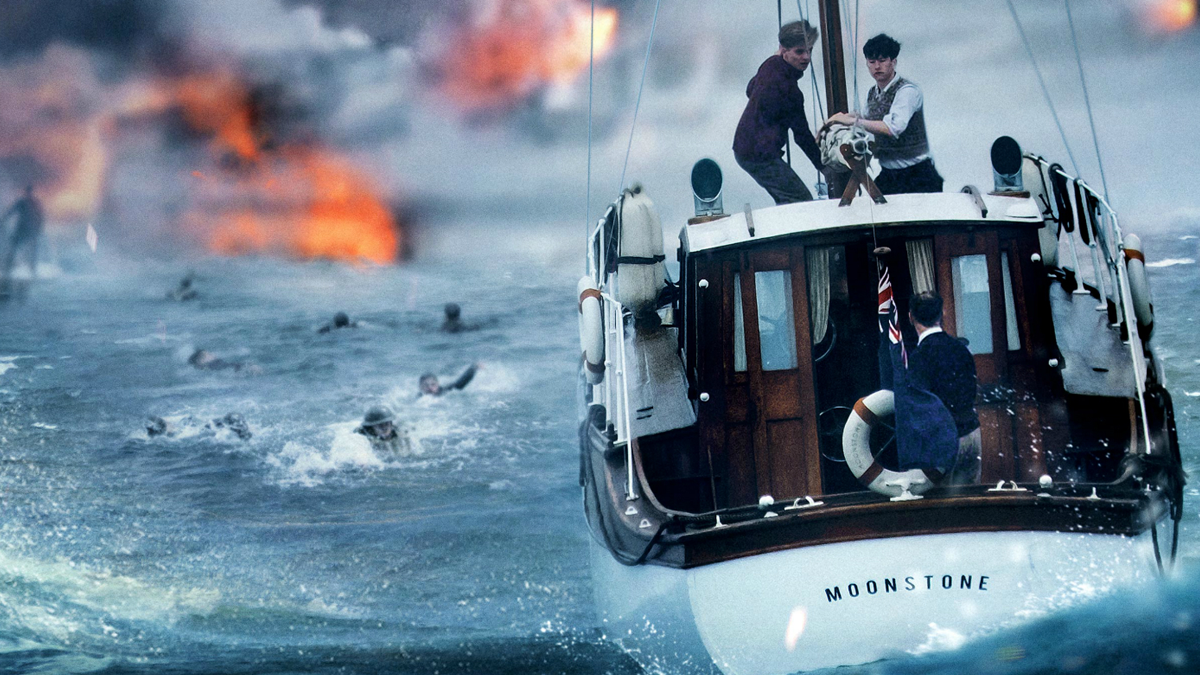 Christopher Nolan is easily one of the best visual artists to step behind a camera in the last twenty years. I have been amazed consistently by his ability to deliver great films that bear little resemblance to his other projects aside from his epic flair for visuals, well-thought out action sequences, and innovative storytelling techniques. I still remember when my mom and I went to see a small independent film called Memento when it made a brief theatrical run here in Little Rock. With each film Christopher Nolan has gone more and more epic in scope. He goes where his vision takes him and does what it will take for him to make the film. He is one of the least compromising mainstream filmmakers. Dunkirk is no exception. It is his clear cut vision that comes across the screen.

Dunkirk tells the story of the miracle at Dunkirk when 400,000 troops were marooned on a small beach on the shores of Dunkirk. The men on the beach are sitting ducks for the German planes, and are incapable of moving due to the German front that block Shrem on land. As enemies surround the men on the beach and the British Navy is incapable of retrieving the men, civilians with boats begin to make the trek to save the men left behind. To tell this story Christopher Nolan employs techniques which show from the ground, the Sea, and the air how the combat took place. This approach is where the film has gotten its most vocal admirers and vocal critics.

If you have seen the film The Thin Red Line, a war film that seems to be filmed from the viewpoint of a higher being, then the approach that Christopher Nolan took for Dunkirk will not be completely surprising. This film is much more in line with that film as far as the narrative structure than Saving Private Ryan, in that every actor in the film felt that they were the central character of the film. Nolan is allowed to subvert expectations, and it turns out that Nolan’s war film is one of his greatest experiments. Whether or not this experiment works or not is in the eye of the beholder.

For people that were looking for a war film with identifiable characters, historical figures, and clear-cut time sequencing – this is not that film. The characters that are presented on screen often say very little, their name is not mentioned except maybe in passing once or twice, and there is no backstory given. For a film that is trying to encapsulate an experience of a battle rather than be a history lesson or adventure story, this approach makes sense. That approach also sacrifices character development which makes the audience have trouble identifying with the characters onscreen. It is a calculated risk to say the least.

There are certain things that are beyond dispute about the film. The acting is very good. Tom Hardy, Harry Styles, Kenneth Branagh, and newcomer Fionn Whitehead all turn in great performances in their roles. The direction by Christoper Nolan exudes his amazing technical abilities. Nearly every scene in the film is more complicated in one scene than most directors can handle in an entire film. The choice to shoot on 70mm and IMAX film is an excellent choice and serves the amazing scope of the film. Visually, the film is astonishingly beautiful – easily one of the most beautiful war films ever made and probably the most beautiful since The Thin Red Line and Saving Private Ryan. The cinematography by Hoyle Van Hoytema (Spectre, Interstellar) is amazing. The score by Hans Zimmer is some of the best film composing done this year – all heavy strings and pulsing drums.

Aside from the lack of character development, the only other complaint that could be levied against the film is that the time structuring of the film leads to action being broken up in jarring ways that are so different that every scene where people are not in adverse danger feels incredibly slow. I think this is what has led to frequent reviews that have called the film slow or boring. I think that this is a valid point, that I can see turning opinion of the film.

At the end of the day, I really enjoyed this film but I also understand why some didn’t. I appreciate Christopher Nolan’s willingness to experiment with form and put everything on the line. What he ended up with was a beautiful film, and the final moments of the film gave me goosebumps.

As is the case with most, if not all, of Nolan’s films; they’re best experienced on the big screen. And when I say the “big” screen, I’m talking IMAX. Personally, I’ve never seen one of his films on an IMAX screen, but I have to imagine that’s the way to go. As is stands, I’m right at home with my 65″ 4K television and let me tell you that this is one fine-looking film. Going on the assumption that the Batman films and Inception have been viewed by anyone reading this review, the multi-aspect ratio “thing” is once again in full effect. Nolan shot Dunkirk on film, 70mm no less, and we’re treated to several scenes that alternate between 1.78:1 and 2.20:1. The narrower, 1.78:1 scenes make use of the 70mm aspect (pardon the pun) of the presentations and showcase a little more detail. In contrast, the 2.20:1 scenes (and the switch is so gradual, it was often a few minutes before I noticed the bars) are a bit darker, though still look brilliant. The movie was transferred to 4K for this disc, maintains a bit of grain from the source material, but the HDR combined with the splendid-looking visuals don’t detract in the least. Simply put, it’s one of the most pristine examples of how a film should look at home.

There was evidently a bit of uproar, because the “internet” loves to complain about anything, when it was announced that this wouldn’t feature a Dolby Atmos or DTS X mix. Nolan felt that a DTS HD Master Audio mix would suffice and he was right. This movie is loud! I can imagine a scenario in which an atmospheric mix would have added a new layer of oomph to the track, but what we’ve got here sounds just fine. Vocals are rich and pure, surrounds and LFE play a major part in several of the scenes which, in some cases, shake the room. I’ve often said in reviews “…this isn’t Saving Private Ryan…” but in this case – it’s better. Let the lack of an Atmos track go and enjoy the experience. And I assure you, it is one.

This is a three disc set with the feature appearing on an Ultra HD/4K disc, the Blu-ray and the third disc houses the supplements. Nolan evidently did this so that the films would have ample “room” and the image and sound quality wasn’t compromised by the supplemental material. Ok then…

Dunkirk is going to be a divisive film. I understand fully the reasons why some will find the film boring or lacking depth of character. These are not illegitimate complaints. This is a war film that will probably be best loved by those who loved The Thin Red Line. I personally couldn’t keep my eyes off the screen, and despite some small reservations on the pacing, I highly recommend checking the film out. It is one of the most beautifully shot films that came out this year. That said, this review should have done a good job of telling you whether or not this film will be your cup of tea.